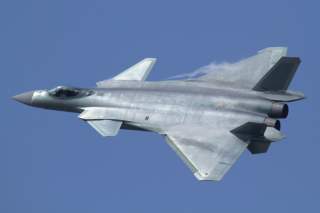 At the apex of Chinese aerospace capabilities, the PLA Rocket Force continues to field some of China’s most advanced and potent weapons systems, which are summarized by category in a useful table on page ninety-five. Of particular note, the DF-21D ASBM “gives the PLA the capability to attack ships, including aircraft carriers, in the western Pacific Ocean.” The DF-26 intermediate-range ballistic missile, which China began fielding in 2016, “has a maximum range of 4,000 km,” sufficient to conduct a precision strike on Guam.

The South China Sea figures prominently into both Chinese activities and the report’s coverage. Last year, China landed a military transport aircraft on Fiery Cross Reef. It also landed civilian aircraft on its newly constructed airfields at its three largest Spratly Islands outposts—Fiery Cross, Subi and Mischief Reefs. China is preparing the capacity to host a regiment of twenty-four fighters in reinforced hangars on each of these three augmented features. As has been determined by the Arbitral Tribunal, Subi Reef and Mischief Reef, together with Hughes Reef, are below high tide in their natural state and hence “do not generate their own maritime entitlements.” The report contains annotated photos of all China’s seven Spratly outposts, on which it continues to develop a panoply of military-relevant facilities. Other assets particularly relevant to supporting such outposts in the South China Sea, or even seizing new features, are the PLAN Marine Corps, a growing array of amphibious vessels, and the AG600 large amphibious seaplane.

To address burgeoning overseas interests, China is increasing its overseas security capabilities, presence and access. The report underscores Chinese movement toward the Indian Ocean and beyond. It documents that a PLAN nuclear-powered attack submarine called on Karachi, Pakistan, in May 2016. To support such long-distance naval operations, China began construction of a military facility in Djibouti in February 2016 “and probably will complete it within the next year.” Additionally, to bolster supplies and intelligence support, China may pursue “a mixture of military logistics models, including preferred access to overseas commercial ports and a limited number of exclusive PLAN logistic facilities—probably collocated with commercial ports.” China will “most likely” seek “additional hubs,” however termed, “in countries in which it has a longstanding friendly relationship and similar strategic interests, such as Pakistan.”

Despite the aforementioned developments and related concerns, the report documents in detail, Washington continues judicious military contacts and exchanges with Beijing. “Carefully tailored,” they are designed to further mutual interests, “manage and reduce risk,” and encourage transparency. Like its predecessors, the report takes pains to note positive Chinese security contributions, including eight years of anti-piracy operations in the Gulf of Aden, the largest number of personnel contributed by any permanent member of the UN Security Council, and the second greatest funding of UN peacekeeping operations over the past twelve months.

An Imperfect but Invaluable Contribution

Expecting perfection from a public government report of this nature is typically an exercise in frustration. Of greatest substantive significance, this year’s Pentagon report lacks many of the fascinating specifics on China’s space and counter-space activities found in the May 23, 2017, testimony of Director of National Intelligence Daniel Coats before the Senate Armed Services Committee. To address this disparity, the author obtained permission from noted space capabilities and law expert Michael J. Listner to share his observations on the subject:

China’s space and counter-space operations fall under its Strategic Support Force, which it established in 2015 to direct the PLA’s space, cyber and electronic warfare missions. While little information is publically available about the Strategic Support Force, its mission as related to outer space appears in accordance with the PLA’s view of outer space as a “commanding height,” which indicates that PLA doctrine sees outer space as a theater of war in support of its terrestrial military objectives and not the focal point of war itself. This perspective is only beginning to evolve in United States military doctrine.

Surprisingly, the report only briefly addresses China’s growing counter-space capabilities. It merely mentions that China is “developing a variety of counter-space capabilities designed to degrade and deny the use of space-based assets by adversaries during a crisis or conflict.” What is perplexing is why the report again avoids the term ASAT or fails to elaborate on the capabilities being developed; i.e., hard-kill and soft-kill ASAT capabilities, especially since the 2017 Worldwide Threat Assessment from the Director of National Intelligence specifically mentions that China (and Russia) “both will continue to pursue a full range of anti-satellite (ASAT) weapons as a means to reduce US military effectiveness.” The DNI report then specifically addresses the types of ASATs being developed. That the Pentagon’s report again fails to specifically mention “ASATs,” much less its development of an operational ASAT capability, demands further inquiry.

It a pattern plaguing many reports produced through bureaucratic processes, it has proven impossible to keep all information in the Pentagon China report fully up-to-date. For example, the report states that the Burma-China oil pipeline “is not yet fully operational,” when in fact commercial operations began about two months ago. Moreover, in surveying the sixteenth annual Pentagon China reports issued since 2002, one can often find typos, redundancies, or slight ambiguities in verb tense—the latter of which can make the exact status of a new weapons system seem unclear. Finally, the report’s judgements are not footnoted or otherwise explained. Readers are not told how exactly the Pentagon calculated China’s defense budget at $180 billion for 2016 instead of the $144.3 billion that Beijing announced (itself already fourteen times that of Taipei).

That said, the 2017 edition offers few other issues with which to quibble—save for the perennial reality that it would always be nice to have still further information. Unlike some of its predecessors, the report correctly locates what is now the Eastern Theater Navy Headquarters in Ningbo, not Dinghai. Perhaps most importantly, it finally documents the existence of China’s maritime militia, which has played a frontline role in China’s sovereignty advances in the South China Sea since at least 1974. As usual, China’s official government spokespeople and allied media such as the state mouthpieces and the Global Times rail against the report for shining light on Chinese activities. But they offer few, if any, substantive challenges to the invaluable facts that it brings to the discussion. In this, the report makes a contribution worth far more than the $97,000 spent on its production. To the extent that Beijing declines to be transparent about significant military and security developments of importance to its neighbors and the world beyond, it is vital that the public everywhere is offered a report that does so—backed by the full knowledge and authority of the U.S. government.

Andrew Erickson is a professor at the U.S. Naval War College.

Image: Flypast of the Chengdu J-20 during the opening of Airshow China in Zhuhai in November 2016. Wikimedia Commons / Alert5