A New Powell Doctrine at the Federal Reserve 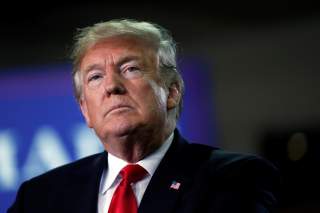 On Friday, the stock market rebounded slightly from its big dip earlier in the week. Does the frothy market mean that the Federal Reserve is “loco,” as Donald Trump put it a day ago? Not a chance.

The precipitous fall of the market in previous days has alarmed Trump who had tethered his electoral fortunes to soaring stocks. Once the market dived, he sought a handy culprit for its fall. Trump is objecting to the Federal Reserve’s modest but steady increases in the interest rate, which it raised to 2.25 percent in late September. Instead of complaining, however, he should welcome the Fed’s move.

Avoiding an overheated economy will help to ensure that America does not experience a renewed bout of inflation and that it can try and achieve a soft landing. Its Trump’s own appointee, Federal Reserve chairman Jerome H. Powell, who is backing the move toward higher rates. Call it the Powell doctrine.

Powell wants the Fed to be immune to political considerations. At a press conference in September, he stated, “We don’t consider political factors or things like that. That’s who we are, that’s what we do, and that’s just the way it’s always going to be for us.” As Catherine Rampell noted in the Washington Post, “There’s good reason to safeguard central bank independence: It’s that we don’t want to turn into Venezuela. Or Argentina. Or pre-euro Italy. Or basically any hyperinflationary basket case whose population doesn’t believe that monetary policy is free of political influence.”

But Trump has his eye on the midterms. Powell has his on longer-term economic stability. With unemployment is at less than four percent and the economic expansion one of the longest in history, Powell is opting for cautious rises in the interest rate. There’s a case to be made that the Fed should be even more restrained; economist Paul Krugman declared on Twitter, “The problem is that the 2% target is almost surely too low: the Fed should actually let inflation rise above that level.”

But to what level? The problem, of course, is that the Fed cannot operate with scientific precision. Fail to act promptly and it risks inflation becoming a self-fulfilling prophecy. Act too quickly and it can quash the economy.

The resurgent economy suggests that it’s time to pump, not slam, the brakes on the economy or risk the kind of inflationary spiral that America experienced in the 1970s. Back then, stagflation—high unemployment and high inflation—took hold. It required a brutal recession engineered by Fed Chairman Paul Volcker to squeeze inflation out of the economy. Powell and other policymakers are mindful of that lesson and don’t want a repetition of stagflation.

The result is that the easy-money era that took hold after the 2008 economic crash is coming to an end. The Federal Reserve has been unwinding its purchase of some $4 trillion in bonds, which it started in earnest in March 2009 to pump money into the economy. As interest rates go up, bonds, not equities, are starting to look more attractive to investors.

But there is another reason for why the market is see-sawing right now: Trump’s trade war with China. Trump has imposed $200 billion in tariffs on China and is threatening to levy even more. But for all his talk of how easy trade wars are to win, Trump has little to show for his efforts. The trade deficit with China actually rose in September by $34.1 billion, or a 13 percent increase. Meanwhile, Ford says that it anticipates about twenty thousand in layoffs and $1 billion in losses thanks to Trump’s tariffs.

Treasury Secretary Steve Mnuchin is maintaining an upbeat line. When it comes to the economy, he said on Friday on CNBC, “The U.S. economy is strong. U.S. earnings are strong. I see this as just a natural correction after the markets were up a lot.” Others agree. JP Morgan CEO Jamie Dimon said Friday, “The economy is growing. Rates are going up. Most of us consider this a healthy neutralization. I expect rates will continue to go up.”

Unlike the hardliners on China in the White House such as Peter Navarro, Mnuchin is a free trader. Trump, who likes to pit his aides against each other, will have a chance to move back to Mnuchin’s side. He now has an opportunity to choose to trumpet a new grand bargain, much as he did with the renegotiation of NAFTA, which he rebranded the United States-Mexico-Canada Agreement, when he meets with Chinese president Xi Jinping next month at the G-20 meeting in Buenos Aires. An agreement with China to defuse trade hostilities, or agreeing to arrive at one, would do far more to goose the stock market than complaining about the Federal Reserve and monetary policy.