The New Realignment Between Russia and the Philippines 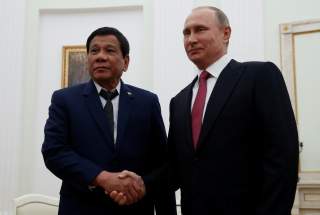 “I'm better off in saying that my favorite hero is [Vladimir] Putin,” Philippine President Rodrigo Duterte once said when asked about his opinion of global leaders back in 2016. A few months later, he became the first Filipino leader in recent memory to make a state visit to Moscow, where he met his putative political mentor and broke the century-old ice in Philippine-Russia relations. Earlier this month, Duterte made a second visit to Russia, cementing one of the most dramatic strategic realignments in Asia. Almost single-handedly, he has ended the American-trained Philippine military’s age-old inhibitions about military cooperation with Russia.

For the first time in its history, Manila is seeking Russian assistance to upgrade its defensive capabilities and, potentially, even develop its energy resources in the South China Sea. To put things into perspective, the newfound Philippine-Russia rapprochement is not only the reflection of an outright ‘bromance’ between two of the most prominent authoritarian leaders, which could fizzle out over the years and political cycles. But it also represents a potential hedge against China’s encroachment into Philippine waters. In a remarkable twist of events, an American ally is seeking post-Soviet Russia’s assistance to stave off communist China. And it took a surreal combination of strategic boldness and pure opportunism on the part of Duterte and Putin to make this happen.

Undoubtedly, there is certainly an element of personal chemistry that drives the blossoming Philippine-Russia relations. Over the years, a whole host of world leaders, including President Donald Trump and Hungarian Prime Minister Viktor Orbán, have unabashedly praised Putin’s supposedly firm and decisive brand of leadership, especially his successful consolidation of personalistic power in a de facto one-man regime. Not to mention, other populist authoritarians such as Turkish President Recep Tayyip Erdogan, the modern Sultan, who has managed to build a virtually identical system across the Black Sea.

The Filipino president, however, is likely Putin’s most enthusiastic protégé, who has repeatedly cussed at the West’s supposed interference in his affairs. No wonder, Duterte is likely attracted to Putin’s ideology of “sovereign democracy” (suverennaya demokratiya), which, according to veteran Russian propagandist Vladislav Surko, denotes a regime whereby a “society's political life…the political powers, their authorities, and decisions are decided and controlled by…the people that formed it.” As the longtime Putin advisor put it, a nation is democratic in so far as it’s insulated from external meddling, especially from Western powers. Notorious for his arbitrary decision-making and apocalyptic rhetoric, Duterte’s politics also closely resemble the views of Putin’s state philosopher, Ivan Ilyin, who argued in favor of a savior-leader that rules based on “redemptive excess” and “patriotic arbitrariness.”

But as Duterte made it clear at the 6th Annual Meeting of the Valdai Discussion Club in Sochi, reaching out to Russia is a critical element of his so-called “independent foreign policy”, which seeks to diversify the Philippines’ Western-centric strategic tradition. During his high-profile speech, with no less than Putin and other Eurasian leaders in attendance, the Filipino leader lamented how his predecessors ignored and pushed Russia to “the margins”, an “oversight of [huge] strategic proportion”, which he seeks to redress through proactive engagement of the Putin regime. He also made it clear that this is less about ideological alignment against the liberal West, but instead about “expand[ing] the horizon of Philippine diplomacy by deepening our engagement” with like-minded nations in the East.

Russia To the Assistance

Duterte’s Russian foray, however, goes beyond pure symbolism and strategic posturing. During his first visit to Moscow in mid-2017, the Filipino president, accompanied by top defense and national security officials, managed to strike a number of key agreements even if he had to make an emergency return to Manila amid the siege of Marawi by so-called Islamic State (IS)-affiliated militants. The most crucial one was the Agreement on Defense Cooperation (ADC), which provided an unprecedented framework for bilateral defense cooperation as well as the purchase of Russian weapons. Throughout the months-long battle against IS in the southern Philippines, Russia rapidly leveraged counter-terrorism cooperation to build military-to-military ties with the American-trained Armed Forces of the Philippines (AFP).

With a historic defense agreement in place, Russia offered military assistance, including armored vehicles and rifles; explored joint naval exercises in the Philippines’ porous maritime borders with Malaysia and Indonesia; and likely even offered intelligence on IS fighters in Southeast Asia. Over time, the AFP and Russia began exploring the purchase of advanced weaponry amid a multi-billion-dollar military modernization program in the Philippines. And despite active American discouragement and sanctions against Russia, the Philippines is now set to acquire 16 units of MI-17 medium-lift helicopters from Moscow. No less than Philippine Defense Secretary Delfin Lorenzana, who formerly served as a defense attaché in Washington DC, recently said that the AFP is seriously contemplating the potential purchase of not only warships, tanks, and attack helicopters, but also kilo-class submarines from Russia.

Amid blossoming defense ties, Moscow recently appointed its first-ever defense attaché in Manila, with the Russian embassy boasting: “What we can assure you, if you are going to procure military equipment for us, we are going to give you brand new ones and not second hand.” This was a thinly veiled jab at the US, which has faced constant criticism, especially from Duterte and his henchmen, for supposedly dumping suboptimal weapons to its oldest Asian ally. In addition, the Filipino president relishes Russia’s disregard for human rights concerns, which has partially affected American defense aid to the Philippines in recent years. In short, Russia represents an alternative military supplier, which strengthens Duterte’s hands toward Washington.

Moreover, during the Philippine-Russia Business Forum, Duterte invited top Russian companies to explore opportunities in the Philippines’ booming infrastructure and energy sectors. Crucially, he courted offshore energy investments from Russian oil giant Rosneft.  The details of the exploratory agreements are still unclear, but there are discussions over potential Russian investments in the Philippine waters in the South China Sea. As neighboring Vietnam has shown, Moscow can serve not only as a key source of military hardware, including state-of-the-art kilo-class submarines but also strategic energy investments to keep China at bay. Major Russian energy companies, specifically Rosneft, Gazprom, and Zarubezhneft, have been active participants in Vietnamese offshore projects in the South China Sea. Despite Moscow’s supposed alliance with China, the opportunistic Putin, who is in the middle of his own ambitious yet still haphazard pivot to Asia, has shown little reticence in arming and supporting Beijing’s rivals in the South China Sea, including both Vietnam and Malaysia. Thus, the Philippines can similarly leverage Russian weapons and energy investments to protect its interests in the disputed waters amid China’s revanchist expansionism. By reaching out to Russia, Duterte strengthens his position versus both the United States and China.