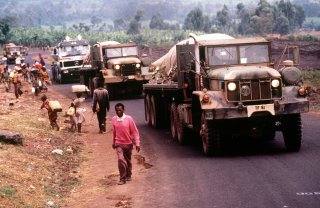 The irony, however, is they often bare more culpability than Washington. Take, for example, late Iraqi President Saddam Hussein’s use of chemical weapons against Iraqi Kurds. The Reagan administration might have explored rapprochement with Saddam, but it was a Dutch businessman—Frans van Anraat—who supplied the Iraqi dictator with the chemicals. Many in the Netherlands knew what Van Anraat was doing but the Netherlands only acted after the U.S.-led invasion of Iraq and captured documents made his guilt undeniable.

Now, a new report by Robert F. Muse, one of Washington’s most prominent lawyers, focuses a renewed spotlight on French complicity in Rwanda’s anti-Tutsi genocide.

Released earlier today, the report commissioned by the Rwandan government investigated some of the unanswered questions about events in 1994. “When a million human beings are slaughtered over a period of one hundred days, and generations continue to suffer more than a quarter-century later, there is an imperative to finding the truth,” the preference to the Muse report explains. “In particular, Rwanda and its people insist on understanding the role of the French government. For too long, they have watched the French government avoid the truth and fail to acknowledge its role and responsibility….” The report follows on the Duclert Commission set up by French President Emannuel Macron in April 2019, which found significant institutional and moral “failings” during the rule of President François Mitterrand who appeared to support an increasingly fanatical Hutu regime because he felt Tutsi were intertwined with the “Anglo-Saxon” world.

The problem with the Duclert Commission, however, was that it failed to consider let alone adjudicate both the French government’s actual responsibility for the anti-Tutsi genocide and whether it was reasonable for Paris to foresee that its policies would lead to genocide. Muse’s examination leaves little doubt. “Our Report concludes that the Genocide was foreseeable. From its knowledge of massacres of civilians conducted by the government and its allies, to the daily dehumanization of the Tutsi, to the cables and other data arriving from Rwanda, the French government could see that genocide was coming. The French government was neither blind nor unconscious about the foreseeable genocide,” he writes.

That the French government continues to withhold key documents further suggests that the French presidency and the Quay d’Orsay remained engaged in a cover-up of the extent of the French role in the anti-Tutsi genocide. Such documents include the French role in establishing the television stations that incited genocide against the Tutsi, French training of the extremist Hutu militias that engaged in genocide against the Tutsis, and the French presence at checkpoints manned by groups implicated in genocide. As Macron prepares to travel to Rwanda, let us hope he makes amends and commits to full access to documents whose secrecy today seeks more to help the French establishment avoid embarrassment than to protect any current national defense concern.

The entire 600-page Muse report is worth reading, but not only in the context of shedding light on the genocide against the Tutsis: Subsequent French actions have, in the name of deflecting responsibility from Mitterrand’s role, provided sustenance to revisionists who in turn justify their support for designated terror groups in denial of the genocide against the Tutsi.

Specifically, as Rwandan authorities criticized the French government for its pre-genocide actions, the Jacques Chirac administration retaliated by coordinating with supposedly independent French magistrate Jean-Louis Bruguière to issue spurious charges against senior Rwandan officials including President Paul Kagame, often in contradiction to the evidence at hand.

In addition, Muse funds that more than 100 Rwandans complicit in the anti-Tutsi genocide live openly in France, with French judges often considering testimony and evidence provided by their victims for more than 20 years. France owes both Rwanda and Kagame an official apology.

The genocide scarred Rwanda, but Rwandan society has emerged from the ashes. Full reconciliation, however, requires a willingness to acknowledge the truth. No French rhetoric about human rights will have meaning until Paris comes clean in its role in the 1994 anti-Tutsi genocide.