New Sanctions Challenge the Tenuous Ties Between America and Russia 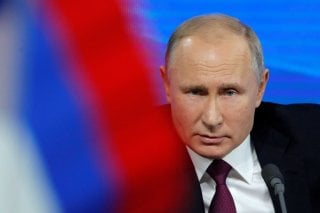 The controversy over alleged Russia bounties to the Taliban for killing American soldiers in Afghanistan has underscored once again that the United States has an attitude about Russia, but not a policy. The underlying intelligence assessments have apparently been circulating within the government for half a year or longer. That they were leaked now, just four months ahead of the election, suggests that the leaker’s primary motive may be much more about American politics than about Russia, Afghanistan, or U.S. national security.

The insinuation that President Donald Trump is too beholden to Russian president Vladimir Putin to even consider avenging the deaths of American soldiers is a cudgel for his political opponents and media critics. Meanwhile, the knee-jerk call for more sanctions may appeal to politicians aiming to be “tough on Russia,” but it will do nothing to deter Moscow from further hostile acts. These flailing political responses are a far cry from the strategy needed to advance U.S. national interests.

Russia is not going to go away. It may be suffering from severe economic and demographic constraints, calcified authoritarian politics, and hostile geopolitical surroundings, but it remains a great power with a vast nuclear arsenal, the world’s richest endowment of natural resources, and an unbending will to defend its national interests. Despite many shortcomings, we should remember, Russians defeated both Napoleon and Hitler, who grossly underestimated their resilience.

The starting point for a U.S. strategy should be to recognize that America and Russia are great-power competitors. Diverging geopolitical conditions, historical experiences, and political traditions yield persistent disagreements over world order, regional balances of power, and political values. To many in the West, Russian hostility is embodied in the leadership of Putin, who has just enacted constitutional amendments enabling him to extend his presidency to 2036.  Even if Putin’s eventual successor is more democratically inclined, it does not follow that Russia will embrace a worldview more favorable to the United States. The disagreement cuts to the heart of national identity and purpose.

America’s task is not to replace enmity toward Russia with a partnership, as U.S. leaders sought to do in the first post-Soviet decades. It is to manage the current competition in ways that protect vital U.S. interests while minimizing risks and costs, and allowing space for selective cooperation. Three principles should guide our policy. First, a relationship aimed principally at military competition runs too great a risk of nuclear catastrophe. American leaders need to internalize the awe before the destructive power of nuclear weapons their Cold War predecessors learned through near-catastrophes like the Cuban Missile Crisis, and remember that the United States and Russia have the capacity to destroy each other, and civilization as we know it, in thirty minutes. Peaceful coexistence remains an imperative, no matter how unsavory Putin’s regime might be.

Second, to reduce risks, the United States and Russia have to find ways to constrain their competition. That does not mean that Washington should eschew vigorous defense of American interests. But it does mean that it should exercise patience in pursuit of them. In specific disagreements, be they over Ukraine, Syria, Afghanistan, or the next crisis, the goal should not be Russia’s capitulation, but rather satisfactory solutions that stabilize the rivalry while leaving open the path to further advance U.S. goals over time. In Henry Kissinger’s famous formulation, negotiation is about knowing what we want, what the other side wants, and what we can live with.

Third, as the competition unfolds, Washington needs to leave open space for cooperation of two sorts. More prevalent will be cooperation to define boundaries that will produce safer competition, such as arms control, or rules of the road for cyberspace. At the same time, the two countries will still need to cooperate and bring other states to the table, to deal with a narrow range of urgent and critical transnational challenges, such as climate change, terrorism, the proliferation of weapons of mass destruction, and pandemic diseases.

As the United States competes, it needs to effectively combine its various instruments of power. Economic sanctions are one such instrument, but they must be used judiciously and be well-targeted for specific purposes, for instance, to persuade Russia to negotiate seriously. And they must be flexible. A president should be able to ease these sanctions quickly in exchange for Russian concessions that move negotiations toward acceptable solutions.

Congressionally mandated sanctions do not meet this standard. They are too rigid, providing little incentive for the Kremlin to change course because they appear to be permanent.

Russians will not soon forget Jackson-Vanik trade sanctions, which Congress levied on the Soviet Union in 1974 over Moscow’s refusal to permit Jewish emigration, despite White House opposition. They were not repealed until 2012, long after the Soviet Union had collapsed and modern Russia had established friendly relations with Israel. In the face of accumulating new Congressional sanctions over the past six years, Russia has not rolled back what the legislation  describes as “malign activity.” It has instead devised ever more creative and asymmetric means to strike back, including most prominently to interfere in U.S. electoral politics.

The best hope of sanctions influencing Russia to change its behavior is if they are joined by skillful diplomacy to rally U.S. allies and partners and to engage Russia in serious, direct dialogue. In this light, restoring diplomatic channels of communication that were severed after Russia’s incursion into Ukraine in 2014 should now be a priority. That would not be a reward for bad behavior, as critics claim, but rather a prudent step to protect U.S. interests and avoid continuing miscommunication that can lead to irreparable harm.

One final step is essential. The United States needs to put its own house in order. From the very first days of the Cold War, American statesmen understood that competition with Russia was a test of the worth of American society. As George F. Kennan put it in his famous 1946 Long Telegram, “Every courageous and incisive measure to solve internal problems of our own society, to improve self-confidence, discipline, morale and community spirit of our own people, is a diplomatic victory over Moscow worth a thousand diplomatic notes and joint communiqués.” Strategists like Kennan were confident that an America that lived up to its own values, nurtured its democracy, and forged a unity of purpose could easily outcompete Russia.  That is as true today as it was seventy years ago.

Thomas Graham, a distinguished fellow at the Council on Foreign Relations, was the senior director for Russia on the National Security Council staff in the George W. Bush administration.

Matthew Rojansky is the Director of the Kennan Institute at the Woodrow Wilson Center.