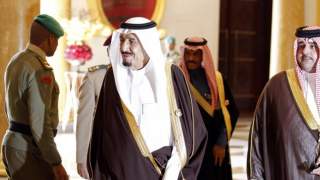 Don’t buy the hype. Saudi Arabia’s new king is not a reformer, and his first acts as ruler confirm he will continue the royal family’s tradition of beggar-thy-neighbor energy policies and uncompromising, widespread repression.

Saudi Arabia is a pivotal state in the Middle East, home to the holiest sites in Islam and some of the world’s largest proven oil reserves, as well as ringleader of the Sunni camp in the region’s sectarian rivalries.  It holds the line against Iranian depredations in the Persian Gulf and seeks to combat Sunni terrorist groups like the so-called Islamic State and the Muslim Brotherhood in Egypt.

The Saudi royal family executed a speedy transition to new leadership after the King passed away early Friday morning, confirming a new king and new heir before even announcing news of Abdullah’s death. They even appointed an heir-to-the-heir in under 24 hours, filling an optional post known as deputy crown prince. Salman bin Abdulaziz, the new king and half-brother of the late King Abdullah, emphasized continuity with his predecessors in a brief, televised address, although his mumbling, disoriented delivery probably did not reassure the public about his ability to effectively wield power.

While in power, the late King Abdullah took the opportunity to promote many of his progeny to top posts inside the kingdom.  Now it is Salman’s turn, elevating his 35-year-old son Mohammed to run his court and the kingdom’s big budget defense ministry. He also picked his nephew (also named Mohammed) to be deputy crown prince, a position that rumors suggested King Abdullah’s son Miteb was also seeking to secure.

Because Salman’s future successor, Prince Muqrin, was already put in place last March by the late King, the big surprise Friday was Salman’s decision to appoint Mohammed bin Nayef as deputy crown prince. This decision represents the first time a grandson of the kingdom’s founder, Ibn Saud, has been in line for succession instead of one of Ibn Saud’s sons. This resolves a key question about Saudi Arabia’s long-term succession plans.

However, this choice is also highly problematic: as interior minister, Mohammed bin Nayef has directed the kingdom’s tough policies against al Qaeda, but has also overseen the kingdom’s reprehensible campaign against moderate, non-violent rights activists. Thus, his designation as a future king suggests Salman may be doubling down on repression.

On oil policy, King Salman is so far signaling continuity by keeping the oil minister in place, sustaining a controversial policy that puts fiscal pressure on Iran to accept a nuclear deal but also targets unconventional oil producers, particularly the United States and Canada. However, Saudi allies may soon cry mercy, begging Riyadh to relent before the Saudis themselves feel the crunch of low prices. For instance, Oman, a country Riyadh helped shore up financially in 2011, raised stiff concerns this week about their recent revenue losses due to Saudi oil policy.

As Salman noted in a speech on behalf of his ailing brother Abdullah earlier this month, Saudi Arabia is confronted with an unprecedented number of security threats in its immediate neighborhood.  It faces the so-called Islamic State on its northern border with Iraq and Iranian-backed Shi’ite rebels on its southern border with Yemen. Al Qaeda forces in Yemen are resurgent as well.

On the one hand, Salman may be inclined to keep up the pressure on IS because one of his sons was among the fighter pilots who participated in coalition air raids in the fall and even received death threats from extremists for his high-profile role against the Islamic State.  On the other hand, as Saudi defense minister until this week, Salman knows just how incapable his military is of making a real difference on the ground.  That’s why Saudi officials have called for ground troops against IS but haven’t deployed such forces themselves. That’s also why they are simultaneously pursuing a “fortress Arabia” strategy of investing in new, tougher border walls to the kingdom’s north and south.

Thus, Salman has pledged continuity with the policies of Abdullah and the country’s other five historic rulers, but that direction depends in part upon how one interprets Abdullah’s legacy. The late king meticulously cultivated an image of being a reformer, but it’s doubtful that that reputation was truly deserved. Saudi Arabia today is still abjectly dependent on oil for its bottom line (although it seems to have succeeded at keeping the West similarly dependent on Saudi oil). Women in the kingdom cannot drive or make other basic life decisions on their own.  Saudi textbooks still indoctrinate children to feel hatred toward other religious groups, a message that state-backed clerics repeatedly echo at the pulpit.

Calling the late King Abdullah a reformer is like calling a faltering tortoise a racecar driver. Even if he was pointed in the right direction, he wasn’t getting anywhere fast. Expect more of the same from Salman, whose acuity, effectiveness, and personal convictions are even more in doubt than his predecessor’s.

David Andrew Weinberg is a Senior Fellow at the Foundation for Defense of Democracies, specializing in Saudi Arabia and the Gulf. You can follow him on Twitter at @davidaweinberg.

Image: Flickr/Tribes of the World.