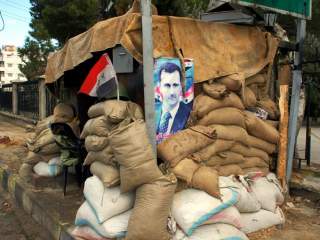 It is easy, as the many commentaries demonstrate, to bemoan the political, social, cultural and humanitarian tragedy in Syria and point to the inconsistency and fecklessness of U.S. policy in Syria as a cause. Harder by far is to identify a better, more coherent strategy. The “if only we had” alternative may be good politics but many of the proffered alternatives depend on unlikely assumptions and are almost certainly better at dinner party debates than they would have been in real policy. Had the United States and its allies intervened earlier, had it taken military action when Bashar al-Assad crossed President Obama’s red line on the use of chemical weapons, and (most important) had the United States and its European allies armed, trained and helped organize the moderate opposition, the Syrian insurgents would at least have had the possibility of defeating Assad early on and establishing a liberal, even democratic, regime.

Perhaps. Many skeptical specialists doubt that happy result: there never was a viable, operational liberal or moderate opposition; the moderates were too few, too fractured and too implausible as a militarily or even politically successful force; and absent massive external intercession, the Free Syrian Army (including its constituent militias and rival militias) was always a feeble force with an improbable victory.

Whatever the might-have-beens, the current choices are far less appealing. In fact, traditional strategic logic inadequately comprehends the complexities of the Syrian dynamics. The policy dilemma began almost immediately after the March 2011 demonstrations against the Assad regime. The celebration was short-lived. The regime cracked down hard not only on the demonstrators but on the ethnic and religious communities that it understood supported them. It had good reason to fear a broader revolt. The large Sunni majority bore deep resentment against the Alawite minority—a Shiite offshoot—that had dominated the political economy, not only for its authoritarianism and corruption, but also for its religious and ethnic repression and violence. By 2013, the demonstrators for a new, liberal democratic regime were outflanked and overwhelmed politically and militarily by the Syrian Army, by Hezbollah forces from Lebanon backing the administration and also by the jihadi Sunni forces, primarily Jabhat al-Nusra (the Al Qaeda offshoot in Syria) and Islamic State of Iraq and al Sham (ISIS or Daesh).

Unlike traditional Bismarckian international balance of power logic in which the adversaries are morally neutral states or polities in some struggle over political and territorial modifications and adjustments to revise or restore the balance of power among them, the adversaries in Syria are moral not just territorial or even solely political antagonists. They are locked in seemingly existential conflicts that cannot easily be compromised and that appear resolvable only by the total conquest of their respective opponents. All of the contestants for power seem to be committed to eviscerating their adversaries in zero-sum fights to the death. Their goal is either total submission or expulsion.

Absent that existential dimension, the removal or containment of Assad would not represent an insurmountable strategic puzzle for the United States and its allies. A pact could be fashioned among the contestants (including terms for an Assad role), pressure and the threat of intervention could be mounted, or he could be removed either by domestic or international protagonists in favor of a suitable substitute. However he and his inner circle have provided little, if any, room for compromise. Their gruesome tactics prescribe killing or maiming every source of resistance and every opposing civilian population, especially Sunnis.

Complicating the underlying Syrian dynamics and strategic logic, each of the antagonists has one or more foreign backers on whom it can rely and, in some cases, for whom it is a proxy. Assad and his Alawite community have the support of Iran and of Shiite Hezbollah from Lebanon, notwithstanding that in either place the Alawites would be deemed unacceptable deviants from true Shiism, but as against Sunnis in general and fundamentalist Sunnis, they are brothers or at least cousins. Daesh has the direct backing of some individual Gulf Arab Sunni fundamentalists. The Saudis and other Gulf states do not back Daesh directly but do so indirectly by providing weapons and funds to non-jihadi Wahabis and Salafists implacably opposed to Assad.

The attempt to forge from the anti-Assad mélange an indigenous, organized non-jihadi Syrian fighting force proved unworkable and unraveled, as its various components fragmented, fought one another, and (some) defected to Daesh or al-Nusra. Turkey’s President Recep Tayyip Erdoğan insists on Assad’s removal, as does the United States and (less vigorously) its European allies but neither has a compelling anti-Assad military partner.

Any attempt by the United States and its European allies to provide military or political support to one or another of the anti-Assad but also anti-Daesh militias in what Pentagon authorities have called “Syria’s chaotic patchwork of rebel alliances” has to navigate a spaghetti of nearly indistinguishable Syrian splinter groups. Furthermore, any opposition to Assad constitutes inherent, even if indirect and of course only short-term, assistance to Daesh and al-Nusra, and vice versa. Additionally any advantage for Assad and Hezbollah constitutes support for Iran, its Shiite backer. Assistance to any element of Assad’s Sunni opposition also strengthens the Sunni insurgency in Iraq, while any gains by Assad, Hezbollah and Iran, strengthen the central government in Baghdad and therefore constitute opposition to the Sunni tribes trying to get a more equitable arrangement in Iraq.

The Western countries have been faced with a no-win dilemma. For the United States, the strategic challenge has been, and remains, to find a way through this thicket to back some coherent force that could successfully oppose both Assad and Daesh while not simultaneously creating insurmountable animosity among his non-jihadi opponents.

At least a partial way out seemed possible when Kurdish forces made anti-Assad inroads in northern Syria to support fellow-Kurds under attack by the Syrian army. At last, a disciplined force that could take on Assad without immediately and directly advantaging Daesh and al-Nusra which the Kurds also opposed. Alas, of course, support to the YPG (the People's Protection Units)—consisting primarily of Kurds, but also including some Arabs, Syrian Christians, and even westerners—also supports a potential Syrian Kurdistan of which the YPG is the primary armed instrument. Indirectly, it would also entail indirect reinforcement of the Kurdistan Workers’ Party ( PKK) and its armed wing, the HPG (People’s Defense Force), in Turkey. And that indirect buttress remains vehemently opposed by the Erdoğan government—a NATO member government— which has been fighting the PKK insurgency in Turkey for thirty years. Turkey has warned that it “will not tolerate” territorial gains by any Kurdish militia along its borders with Iraq or Syria and has recently shelled YPG positions in Syria to demonstrate that resolve.

The sudden and dramatic escalation by Russia of its engagement in Syria has changed the military and geopolitical landscape and complicated yet further the U.S. strategic possibilities and even the U.S. objectives. As President Vladimir Putin insists, Russia has all along been providing financial and material backing to “the legitimate government of Syria,” i.e., Assad and his regime, including jets, drones, helicopters, tanks, artillery and (significantly, given the absence of air power by any of the insurgents) surface-to-air missiles. Now Russia has taken a direct, kinetic role in the air and apparently even on the ground. In effect, Putin asks the United States which is more important, anti-terrorism or regime change. He takes the view that it cannot have both and, by definition, any attempt by force to oppose Assad’s legitimate government comprises terrorism, and that anti-terrorism trumps regime change.

Putin has several reasons for his stepped-up intervention. The first is his ambition that Russia resume its standing as a world power, and Syria represents an opportunity to reassert the global balance prior to the “geostrategic catastrophe” of the Soviet demise. Second is his antagonism to liberal reform, in particular, to any regime change arising, like the so-called color revolutions, out of mass protests, especially if they are, or if he believes they are, animated by the West. Third is his determination to demonstrate that he is dependable and will stand by his allies, unlike the United States that “dumped” President Hosni Mubarak of Egypt, for example. Fourth is his belief that an authoritarian leader that imposes order is preferable to the chaos that has engulfed Libya, Egypt and of course Syria. Fifth, but ostensibly principally, is his fear that some of the Russian Islamists now fighting in Syria will, like those from Afghanistan and Iraq, return to fight in Russia, and promulgate terrorist assaults like those in Beslan in 2004 and in Moscow’s subway the same year and then again in 2010. As he said in his television interview with Charlie Rose, “More than 2,000 fighters from Russia and ex-Soviet Republics are in the territory of Syria. There is a threat of their return to us. So instead of waiting for their return, we are better off helping Assad fight them on Syrian territory. So this is the most important thing which encourages us and pushes us to provide assistance to Assad. And, in general, we want the situation in the region to stabilize.” Sixth is to protect Russia’s naval facility at Tartus and, now, its Hemeimeem and Tiyas Air Bases and ground staging facility near Latakia.