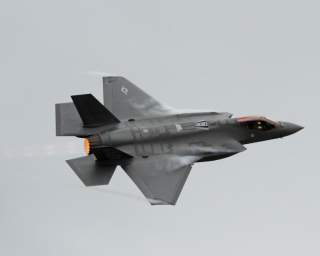 Advanced derivatives of the tri-service Lockheed Martin F-35 Joint Strike Fighter could replace the Air Force’s F-22 Raptor, Boeing F-15C Eagle and F/A-18E/F Super Hornet, multiple sources told the National Interest. However, they added that the idea of replacing the high flying and fast Raptor with the slower and less agile F-35 was not well received by many within the Air Force.

“No doubt that the F-35 will be doing air dominance missions in the future,” one industry official said. “Especially with more internal air-to-air, and maybe a new engine.”

Both the U.S. Air Force (USAF) and the U.S. Navy (USN) have begun preliminary work on analysis of alternatives (AOA) for the sixth-generations of those aircraft. The Air Force effort, called the F-X, is aimed at recapitalizing its fleet of air superiority fighters while the Navy’s F/A-XX program is expected to produce a replacement for the Super Hornet. The Navy will start its formal AOA in 2015 while the Air Force’s analysis will start a little later—in about a year and a half from now.

The Air Force hopes to enter into a technology development phase in 2018.

While both the Navy and the Air Force are looking at many possible options to replace their jets, including modernized versions of current aircraft, new clean-sheet designs—manned and unmanned—and some other outside-the-box ideas, one of the major contenders to replace the F-22, F-15 and F/A-18E/F is a highly modified F-35.

“It will likely be one of the alternatives in the Analysis of Alternatives,” said a senior Air Force official.

The Navy, too, will likely consider a highly modified F-35 to fit its F/A-XX requirement, service officials confirmed. “We will both have to do it in order to baseline our capabilities and ensure the taxpayer and services are getting the best alternative,” the Air Force official said. “It's routine for us to look at whether or not existing systems or modifications to existing systems can fulfill our gaps.”

The Air Force official added that another alternative will be to modify and upgrade the tiny 186 aircraft-strong F-22 Raptor fleet. “Modifying the Raptor will be an option too,” he said. “I doubt either the F-22 or F-35 will ‘win.’”

The Air Force and Navy are adamant that their disparate mission requirements for the F-X and F/A-XX will mean that they will ultimately require separate solutions. “I would expect our requirements to be a lot different from the Navy’s,” Col. Tom Coglitore, who heads Air Combat Command’s Air Superiority Core Function Team and the F-X program, told the trade journal Aviation Week in its Oct. 13 issue. “Our system of systems would be more offensively minded and operate in more difficult and highly contested areas of operation than the areas the Navy will likely be operating in.”

Industry officials, however, are less certain that the Air Force and Navy will ultimately be able to afford separate platforms to replace their aging fleets. The most likely scenario is that budgetary realities will force the two services to develop a common platform. “USAF and Navy can ‘afford’ to have differences now, since everything is pre AoA. However, fiscal realities will force them to align technology and weapons investments,” the industry official said. “Their differences stem primarily from out-of-phase need dates, and different capability emphases.”

Given that defense spending does not look like it will increase in the near future—especially in the coming years when technologies for the F/A-XX and F-X will have to be developed—advanced versions of the F-35 might be the best option for the Air Force. “The USAF will need to factor F-35A—and ‘E’—into the air dominance equation,” the industry official said. “Especially when it’s loaded with next generation air-to-air missiles, and other technologies.”

The Navy, given the limitations of aircraft carriers and their increasing vulnerability to anti-ship cruise and ballistic missiles, might have to concede the high-end air superiority mission to the Air Force.

Arguably, the service already gave up that role with the demise of the Grumman F-14 Tomcat fleet and the cancellation of the Naval Advanced Tactical Fighter and A/F-X programs during the 1990s drawdown.

“The Navy may need to be content with ceding the uber-air dominance mission to the USAF due to the geometric constraints of their ‘mobile airbases,’” the industry official said.

A Lockheed Martin official would not provide any information on advanced F-35 derivatives that are currently in the works—but acknowledged that such projects are underway. “We cannot provide any details on either of these topics given their proprietary nature,” company spokeswoman Heather Kelso said.

Operational Air Force pilots with air superiority fighter experience were less than enthusiastic about the prospect of the F-35 replacing the Raptor or F-15. “I hope they get that we need to be well beyond the F-35 in the future and recycling a ramped up proposal isn't going to be good enough,” one senior officer said.

Another highly experienced F-22 pilot was equally unenthused about the prospect of an advanced F-35 derivative—even if that new variant was equipped with an advanced adaptive cycle engine. “That would be a really bad idea unless they finally got enough thrust with two engines!!” the pilot said. “It is an underpowered airplane from what I hear from my bros flying the jet. But, we have leveraged our tactical aviation future on this aircraft, so I guess we have to like it...”