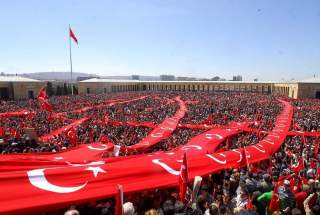 Following the recent attack by the Islamic State (IS) in Suruç, there is now a growing understanding that Turkey needs strong political leadership. This is why efforts to form the next Turkish government, and draft a new foreign policy, has acquired additional urgency.

Prior to the attacks, there had been some positive changes to the Turkish foreign policy vis-à-vis the Syrian crisis. There are now emerging signs that the Turkish position is slowly converging with that of the United States on cooperation with the Syrian Kurds in the struggle against IS.

The decision on Thursday to open the NATO İncirlik airbase for U.S. aircraft and drones, coming just ahead of the actual IS attacks on Turkey killing one non-commissioned officer and wounding two soldiers, is a very significant development. Coupled with this, the introduction of stricter patrolling along the Syrian border, which includes the building of a “modular wall,” reinforcing wire fencing and digging extra trenches, confirms that Ankara is willing to work more closely with its Western allies.

The larger question is, however, whether the next government to emerge from the June elections will move along these policy lines. The Justice and Development Party (AKP) currently control 258 seats (out of a total of 550)—18 seats short of a simple majority needed to form a government on its own. Prime Minister Ahmet Davutoğlu has until August 28 to form a coalition, or President Recep Tayyip Erdoğan will have the constitutional right to call for early elections. The prime minister is currently exploring this possibility with the Republican People’s Party (CHP). If these talks fail, he is expected to try his hand with the Nationalist Movement Party (MHP). The Kurdish-focused People’s Democratic Party (HDP) is not seen as a potential partner.

To be sure, the Syrian crisis is not the only “crisis” the new government will have to cope with. AKP’s approach to the region has alienated a number of states, and now Iran’s “peace deal” with the P5+1 countries is likely to lead Turkey into further isolation. This situation has driven away investments, and the economy has lost its earlier dynamism. The country’s accession process into the European Union (EU) is at a standstill; the conflicts in Cyprus and with Armenia are far from resolved; there is also the Kurdish “question” that has still not been properly “answered.” One of the coalition constellations will have to tackle this hefty list of economic and foreign policy challenges; it is therefore important to consider which one will prove more equal to the task.

Partnership with the nationalists

In terms of relations with the “West,” a coalition with MHP is likely to bring about minimal change in Turkey’s current foreign policy. In principle, Devlet Bahçeli, the leader of MHP, supports Turkey’s EU-membership; whether he will deliver on this, however, is debatable. After all, it was disagreements over the EU that had prompted him to withdraw from a coalition government in 2002, which necessitated early elections and brought AKP to power at the end of that year. Furthermore, MHP’s electoral manifesto was much more focused on the Caucasus, the Middle East and the Balkans. Only a couple of lines were allotted to the discussion on EU affairs.

Recently, AKP has shared MHP’s lukewarm attitude towards the EU. Although Davutoğlu frequently stresses the centrality of EU-accession to Turkey’s foreign policy agenda, his government has been apathetic towards implementing EU’s guidelines for membership. For example, it was under his term that Turkey saw the adoption of new legislation that essentially hollowed out some of the earlier EU-related liberal reforms. Under an MHP-AKP constellation, this pattern is likely to persist. It is also worth remembering that both parties will eventually be competing for the same nationalist and Islamist voters base, which is usually unsupportive of Turkey’s EU membership. It is unlikely that such a coalition would push for a revival of membership negotiations with the EU.

The rise of the nationalist tone could also work against the solution of the Cyprus conflict. Bahçeli argues that a solution should be based on accepting the “two regions, two societies and two governments” of the island. This sets Bahçeli at odds with the Turkish president of Northern Cyprus, Mustafa Akıncı, who supports the island’s reunification.

Akıncı’s vision for the island, which includes greater independence from Turkey, has also drawn the wrath of AKP. Davutoğlu is therefore unlikely to revert to supporting the reunification of the island as he once did when his “zero problems with neighbors” policy was in full effect: in 2004, he had lent his support for Turkish Cypriots’ decision to vote for the United Nation’s Annan Plan that had been submitted to a referendum.

As far as the Kurdish question is concerned, an MHP-AKP partnership may “close” the Kurdish opening for good. This “opening,” launched by Erdoğan in 2012, tried to craft a political settlement of the Kurdish problem—an effort Bahçeli had long criticized. Also, Bahçeli is vehemently opposed to any attempts that may lead to “the fragmentation of national unity into ethnic, political and legal identities.” He is convinced that the “opening” would lead to territorial autonomy for Turkey’s Kurds, and bring about an unacceptable departure from the unitary Turkish state.

This is likely to receive Erdoğan’s support, too. Since HDP’s success at the polls on June 7th (generally thought to have cost AKP its victory), Erdoğan has adopted a more hawkish attitude on the Kurdish issue. Now that the Kurdish nationalists closely affiliated with the Kurdistan Workers’ Party (PKK), the radical Kurdish separatist organization, ended the ceasefire that had been in place since 2012, it is unlikely that AKP would be able to continue to support the idea of a political settlement.

On an even more alarming note, neither party is clear on the direction of foreign policy towards the Middle East. Both envisage Turkey as the undisputed leader of the region, but do not define what kind of leadership Turkey is capable of providing. Currently, Turkey is in deep conflict with Egypt, Israel, Libya, Syria and Yemen, and has no diplomatic ties at the ambassadorial level with any of them. Bahçeli might call for an improvement in relations with Egypt, given the latter’s traditional clout in the Arab world, but it is unclear how an AKP-MHP coalition would manage relations with the other four countries.

Most worrisome is MHP’s silence on the Syrian crisis. It only puts forward that the nation should be defended against security threats, but fails to clarify how its leadership will deal with the Islamic State (IS) or whether it will cooperate with the Syrian Kurds against IS. Based on MHP’s aversion towards any Kurdish political identity, this coalition might even militarily intervene in Syria to prevent the formation of a Kurdish state in the region.

As noted above, AKP may be following a cooperative approach towards the Syrian Kurds and the United States. Nevertheless, a faction within the party still disapproves of anything that diverges from the line Erdoğan has laid out. Should an AKP-MHP coalition be realized, the preferences of this particular faction may well prevail and backtrack on the recent changes to Turkey’s security policy.

Contours of a partnership with CHP

In many respects, this constellation runs the possibility of shifting Turkey to a more pragmatic line. First of all, CHP is expected to explore new avenues for collaboration with the “West”– foremost with the EU and NATO. In light of the recent opinion polls, the Turkish public is likely to appreciate a stronger commitment to these institutions. This attitude would also play a constructive role with respect to efforts to upgrade the Customs Union and revive EU accession negotiations.

CHP also lends emphasis to ending Turkey’s growing isolation in the region. This should push the leadership to overcome the diplomatic impasse with its neighbors—an important step that would not necessarily be advocated by an AKP-MHP coalition.

First of all, there would be a call to end the meddling in Egypt’s internal affairs by championing the cause of the Muslim Brotherhood leadership, deposed by the Egyptian military coup in 2013. If successful, beyond reinstating high-level diplomatic ties with Cairo, this could also improve economic relations with Egypt at a time when Turkey’s export markets are shrinking. Furthermore, CHP is expected to work on “normalizing” ties with Israel, with whom relations have been at a diplomatic standstill since the Mavi Marmara incident in June 2010.

As far as the Syrian crisis is concerned, positive developments may be in store. According to its electoral manifesto, CHP is “completely against terrorist organizations anchoring themselves in Turkish soil”—which is a clear criticism of the AKP administration’s lax border practices especially towards IS. This tougher stance against IS, complementing the recent changes to Davutoğlu’s Syria policy, could keep Turkey’s policies aligned with that of Western allies and thaw the frost on Turkey’s relations with Washington.

Vis-à-vis the conflict in Cyprus, CHP trots a more traditionalist line. Kemal Kılıçdaroğlu, the leader of CHP, is adamant that, instead of only the Greek side, the permanent division of the island should receive international recognition. He is also unyieldingly nationalist on the issue of reconciliation with Armenia, conditioning that Armenian lobbyists stop “attacking” Turkey with “assertions of genocide.” With the backing of more moderate voices in CHP, however, Davutoğlu may have a chance to revive his “zero problems with neighbors” policy and find a formula to break the stalemate on the Cyprus conflict (i.e.: re-explore the UN Annan Plan) and to normalize relations with Armenia.