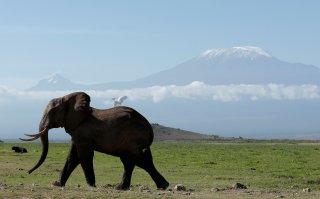 Standing on the tarmac of Mitiga International Airport on January 26, 2004, and watching an unmarked U.S. C-17 transport plane being loaded with nearly thirty tons of documents and components from Libya’s nuclear and ballistic missile programs was one of the most memorable moments in my diplomatic career. It was the culmination of years of diplomacy that started in the Clinton administration and concluded during George W. Bush’s first term. This nonproliferation success is one example of the many benefits achieved by sustaining a thoughtful diplomatic strategy. Such an approach is sadly missing from the current U.S. laissez-faire attitude toward Libya and the three North African states to its west (Tunisia, Algeria, and Morocco). Instead, tepid statements seem to be the extent of current U.S. strategy, such as the one made by National Security Advisor Robert O’Brien on August 4. O’Brien noted how “deeply troubled” we are about the conflict in Libya right now.

Drift and neglect have characterized U.S. policy toward North Africa over the past four years. Regardless of the results on Election Day, the next administration needs to take a fresh look at North Africa. Critical issues for the United States and its allies converge in this region, including counterterrorism, democratization, migration into Europe, and trade expansion. Specifically, the next administration should provide support and resources for Tunisia’s transition; it should launch a serious diplomatic effort to start the process of restoring stability to Libya; and it should seek to promote regional economic integration. Active engagement would advance U.S. interests and values, enhance the stability of NATO’s southern flank, and promote U.S. prosperity.

The Arab Spring began in Tunisia nearly ten years ago and today it is the only Arab country that Freedom House lists as free. While there has been important and impressive political progress, including free and fair elections and peaceful changes of leadership, successive governments have been unable to address the country’s significant economic challenges. Neglect has characterized the current U.S. approach to Tunisia, just as it characterizes the approach to the rest of North Africa. This is a mistake. Consistent with its values, the United States should actively support the Tunisian transition. As the late John McCain once commented to me privately during one of his visits to Tunisia shortly after the revolution, “If it can’t succeed here, it can’t succeed anywhere.” Equally important to the United States, economic stability in Tunisia will be a major factor in controlling the migration that is so concerning to our southern European allies.

Support for Tunisia has broad bipartisan support on Capitol Hill. Although the Trump administration requested $86.4 million for assistance for Tunisia for the 2020 fiscal year, Congress appropriated almost three times as much: $241.4 million. The administration’s request for the 2021 fiscal year ($83.9 million) would be a major cut, but Congress is likely to continue to fund assistance programs at a higher level. Earlier this year Sen. Chris Murphy (D-Conn.) introduced a resolution, co-sponsored by Sen. Lindsey Graham (R-S.C.) calling for the initiation of negotiations for a free trade agreement (FTA) with Tunisia. An FTA would recognize the 300 percent increase in trade since 2000 and would provide U.S. companies with opportunities to expand business in Tunisia and with its neighbors.

After four years of more or less ignoring Tunisia, it is time for the U.S. president to invite his Tunisian counterpart to an Oval Office meeting. The meeting would underscore continued U.S. support for the political transition in Tunisia and—even more important for the average Tunisian citizen—it would signal U.S. willingness to boost commercial links. Such a meeting could take place in the fall of 2021, either after the UN General Assembly convenes (assuming it does so) in September, or as close as possible to the tenth anniversary of Tunisia’s first credible elections on October 23, 2011.

The crisis in Libya has had deleterious effects on U.S. allies, partners, and interests in North Africa and beyond. As Simon Cordall observed recently, “For both Tunisia and Algeria, the conflict in Libya verges upon the near existential. Both share long borders with the fractured North African state and both have suffered as a result of the conflict.” Egyptian president Abdel Fattah el-Sisi has threatened military intervention, which could have disastrous results not only for Libya but also for Egypt, given the limitations of its armed forces. Further afield, the absence of U.S. leadership in managing rifts among partners in the Gulf Cooperation Council and allies in NATO has turned Libya into the poster child for U.S. diplomatic malpractice.

Faint-hearted diplomatic efforts, undercut by conflicting messages from President Donald Trump, have failed to resolve the enmity between Qatar and the United Arab Emirates, who play out their rivalry on the ground in Libya through their support for different factions. Trump’s disdain for NATO has (understandably and unsurprisingly) led French president Macron to question whether the alliance can rely on the United States. Franco-Turkish tensions have risen with the weakening of U.S. leadership of NATO and the two countries have sharply contradictory policies on Libya as well as elsewhere. Meanwhile, ever-opportunistic Russia is filling the vacuum caused by the U.S. being “missing in action” by sending mercenaries to Libyan battlefields.

Calling Libya a “European problem” and saying that U.S. policy is one of “active neutrality”— phrases U.S. officials have used—is a counterproductive abdication of U.S. leadership. It fails to recognize that countering terrorism and preventing illegal migration and human trafficking are not only important for the United States but also for Libya’s neighbors and for our NATO allies. Left unresolved, Libya threatens to become another Syria: a humanitarian disaster for those who live there, ground zero for proxy wars, and a threat to the stability and prosperity of its neighbors and Europe alike.

The next administration should develop a coherent Libya policy that includes reinvigorated diplomacy with partners in North Africa, Europe, and the Gulf (all of whom have an interest, albeit some more legitimately than others). The first step should be to enforce the existing arms embargo, with the next step being the establishment of a framework to reduce (and eventually end) the ongoing fighting. The United States should support robust UN efforts and leverage other multilateral institutions such as NATO and the European Union. When the time is right for economic support to be usefully disbursed, the United States should strongly encourage international financial institutions to devote time and resources to Libyan reconstruction.

As daunting as Libya may be, regional integration in North Africa may be even more of a challenge. Some North Africans half-jokingly lament that at least under French colonial rule one could journey by train directly from Tunis to Casablanca. The International Monetary Fund (IMF) observed last year that intraregional trade is less than five percent of North African countries’ total trade, “substantially lower than in all other regional trading blocs around the world.” Continuing, the IMF report predicted that greater economic integration would create a regional economic market of nearly one hundred million people and could lead to far higher levels of foreign direct investment (FDI).

The next U.S. administration should provide incentives to each of the North African countries so that they start taking steps necessary for economic integration. U.S. incentives need not be costly: technical expertise, seed capital, investment guarantees, and a willingness to initiate FTA negotiations are measures that would not require major U.S. expenditures. And the United States would not have to shoulder the cost alone, but should instead work in concert with Europe, the IMF, the World Bank, and the African Development Bank.

The benefits to each country are clear: economic growth, boosted by FDI, will lead to higher employment rates. Unemployment is arguably the most important economic and social challenge for each of the countries. Moreover, the Eurozone crisis and the coronavirus pandemic have underscored how vulnerable the North African economies are to global (and particularly European) economic vicissitudes. At the same time, the United States and Europe would benefit from a higher degree of North African economic integration for both commercial reasons (a more vibrant market) and political ones (greater stability).

Morocco and Algeria are home to eighty-one million of the nearly one hundred million people who live in the four North African countries, so the next administration should not view either Morocco or Algeria solely through the lens of regional cooperation or the Western Sahara. The U.S.-Moroccan bilateral relationship remains strong; for example, Morocco is a Major Non-NATO ally and Morocco entered into an FTA with the United States 2006. The United States can and should seek opportunities to use the strength of the bilateral relationship as a foundation to encourage greater political and economic reforms. The robust level of U.S.-Algerian cooperation in counterterrorism has not expanded to encompass other aspects of the relationship and is unlikely to do so as long as Algeria continues to concentrate on its domestic political and economic challenges following last year’s protests.