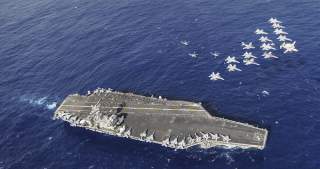 Since the turn of the century political scientists and historians have been warning us about a new Thuycidean trap in which a rising power confronts a declining power. In this scenario, China would play the role of Wilhelmine Germany during the early twentieth century. But at the same time that Germany was rising in Europe, there was another power rising in East Asia that would prove to be almost as troubling to the West as Nazi Germany during World War II. The threat from this new rising power, Imperial Japan, was for a time managed by modern history’s first example of qualitative, multilateral arms control. From 1922 to 1936, the Japanese Navy—along with the navies of Britain, France, Italy and the United States—was restrained by an arms-control regime that began at the Washington Naval Conference in November 1921.

This February marks the ninety-fifth anniversary of the end of the Washington Naval Conference, which produced what is popularly known as the Washington Naval Treaty. This treaty was actually three interconnected treaties: the Nine-Power Treaty on China; the Five-Power Treaty on Naval Armaments; and the Four-Power Treaty on fortifications in the Pacific. The Nine-Power Treaty provided the political problem solving that helped to anchor the other two treaties. It enshrined the American principle of the “open-door policy” on China: any economic concessions granted by the Chinese government to any foreign power would be granted to all the powers equally. When the Chinese nationalists of Chiang Kai-shek united China, this became a threat to Japan and led to Japan’s occupation of Manchuria,and eventually contributed to the withdrawal of Japan from the Five-Power and Four-Power treaties in 1936.

But the rise of militarism in Japan and Europe, and the triumph of the militarists over the civilian leaders in the 1930s, should not be a reason for regarding the interwar naval arms-control regime as a failure. Although Japan and Italy dropped out of the regime, effective December 1936, and Nazi Germany did in the spring of 1939, the regime continued right up until the outbreak of World War II. Like Locarno in central Europe, it was responsible for stabilizing the Pacific during the 1920s and early 1930s, and it provides a model for successful multilateral arms control in the post–Cold War period.

Today there are two major security problems in East Asia: Chinese expansion in the South China Sea and North Korea’s development of nuclear weapons. The latter is probably too volatile and difficult to throw into the mix for a naval conference in the near future. But a conference that would provide a regime of rules for dealing with navigation and rival territorial claims in the South China Sea (and possibly the East China Sea as well) could serve as the anchor for a modern-day treaty that could regulate the naval arms competition among the major powers in the western Pacific: China, Japan, India, Australia and the United States. Japan and Australia are already linked to the United States through military alliances, and India is growing closer to both Washington, DC and Tokyo as both a trade and military partner. The other major territorial claimants in the South China Sea could be invited to the conference to deal only with the political problem. It would be best to leave Taiwan out, as its claims are based on the same basis as China’s and its inclusion would keep China from participating.

The Five-Power Naval Limitation Treaty and Four-Power Treaty of 1922 effectively divided the Pacific area into three spheres of influence: Britain was supreme in the South, Japan in the West and the United States in the East. The trick was to negotiate a treaty that left China militarily dominant in the South China Sea while restraining its exercise of power by placing limitations on military fortifications and ships in the region. Australia would remain the dominant naval power in the South Pacific, India in the Indian Ocean and the United States in the Eastern Pacific.

The Five-Power Treaty limited the capital ships (battleships and aircraft carriers) of the main naval powers by declaring a ten-year naval holiday on new battleship construction, which limited the tonnage and main-gun armament on any subsequent capital ships constructed. The treaty limited the total ship tonnage by a ratio of 5:5:3:1.67:1.67; it also granted parity to the United States with Britain, while Japan was tied to a 60 percent ceiling and France and Italy were granted parity at the bottom. The limits were then extended to lesser warships such as destroyers, cruisers and submarines in the 1930 Treaty of London. Britain insisted that the other European naval powers be brought in so as to not lose its naval dominance in the Atlantic Ocean and Mediterranean Sea.

In today’s situation, bringing in Russia would probably complicate matters too much, so the area covered by the treaty should be restricted geographically to the western Pacific off the coast of China. The equivalent of capital ships today are aircraft carriers, ballistic-missile nuclear submarines (SSBNs) and nuclear attack submarines. India has two aircraft carriers at present, China has one and is expected to add another to its inventory in the near future, and Japan has the equivalent of a helicopter carrier. But the U.S. Navy has ten nuclear aircraft carriers and numerous assault ships/helicopter carriers. The way to manage this disparity is simply to put a limit on aircraft carriers deployed in the geographic area covered by the treaty. SSBNs should be properly regulated by nuclear arms-control treaties, as they are at present between Russia and the United States. The major threat in the South China Sea and the East China Sea is a conventional confrontation involving submarines, aircraft and surface warships. SSBNs would be too valuable to risk in such a confrontation.

Because the United States had begun a major capital shipbuilding program during World War I, it had leverage to persuade Britain to enter into negotiations. Japan wanted to preserve its hegemony in the western Pacific by limiting American and British deployments to the region. France and Italy wanted to preserve their status in the Mediterranean Sea. By deploying more carriers and attack submarines to the Pacific and increasing ties with the other main non-Chinese naval powers in the region, the U.S. Navy could help persuade Beijing to enter into negotiations on naval arms control in the region.

Historians of naval arms control have identified Britain, Japan and the United States as the three crucial primary powers involved in the regime, with France and Italy as distinctly secondary powers. They have focused their analyses of naval disarmament on the policies of the three primary powers. Today the primary powers in any naval arms-control treaty would be definitely China and the United States—and probably India as well, as it is the main non-Chinese Asian naval power.

In 1922 and 1930, ships were restricted in terms of total tonnage and the size of their main guns. In the missile age, most surface warships carry only a single rapid-firing gun and their main armaments are their ship-to-ship (SSMs) and surface-to-air missiles (SAMs). It would make most sense to restrict naval armament by the number of missile launchers on board each ship and the range of the missiles. If such a naval conference were held in the near future and resulted in a treaty covering aircraft carriers and nuclear submarines, a subsequent conference(s) could then expand this arms-control regime to include conventional diesel submarines, smaller warships and possibly even missile boats.

There are three main lessons from the mistakes of those who pioneered naval arms control in the interwar period. The first is that if there is no verification mechanism, then the parties to the treaty will cheat. All the interwar-regime parties built ships that exceeded the treaty limits by understating their displacements. The second lesson is that it is necessary for democracies to build up to the limits in the treaty in order to give expansionist authoritarian powers an incentive to agree to further limits. Britain and Japan both agreed to limits on their capital ships because the United States had an active warship-building program in the postwar period. Failure of the United States to build up to its limit, while refusing to concede parity to Japan in the 1930s, caused Japan to end its participation in naval arms control. If the United States had been building up to treaty limits, Tokyo would have had less incentive to withdraw from the Washington treaty system in December 1934. Third, there are always unanticipated consequences of arms-control limitations as countries rechannel their shipbuilding into classes of ships that aren’t limited by the treaty or aren’t limited as severely. The Washington treaty helped naval aviation to come of age by causing several countries to convert canceled battleships or battle cruiser hulls into aircraft carriers. A new treaty could focus research away from new missiles and toward exotic weapons such as guns that fire kinetic-energy rounds much further than conventional explosive rounds. The United States has already been experimenting with such guns.