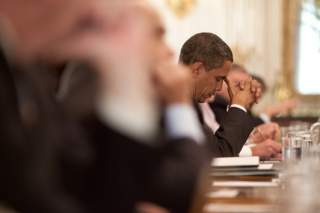 We keep hearing that amnesty will be a political winner. It is the key to Republicans unlocking the Hispanic vote, proponents say. It is a base-pleasing move for the Democrats.

Groups seeking cheap labor or votes regularly circulate polls showing strong public support for a “pathway to citizenship” for illegal immigrants. Bipartisan gangs of senators present immigration legislation as a fait accompli, which has since escalated into President Obama’s threatened unilateral executive action on behalf of millions of illegal immigrants.

Yet Obama has since abandoned his immigration gambit, or at least delayed it until after the November elections. Why do so if amnesty is really popular and action on immigration is necessarily a political winner?

In fact, the White House concluded that moving on immigration without Congress was such a loser for endangered Democrats that it was worth demoralizing the pro-amnesty segment of the Latino voters the party desperately needs to turn out to the polls.

While activists demand “not one more deportation” and ask the president to turn his fabled pen and phone into an amnesty-inducing magic wand, the broader electorate has soured on the idea. According to a recent NBC News/Wall Street Journal poll, Americans now trust Republicans more than Democrats on immigration.

Support for a path to citizenship has collapsed from 64 percent in April to 53 percent in September. Opposition has risen from 35 percent to 45 percent. It should be noted that this wording frames the issue favorably toward amnesty. A differently worded poll might find even deeper opposition.

It’s fashionable to blame the well-publicized influx of unaccompanied Central American minors (among others) for amnesty’s troubles. The news stories made the borders look sieve-like. The Wall Street Journal said Republicans “seized” on the issue and “blamed Democratic leniency toward illegal immigration.”

Certainly, the recent border crisis helped remind voters the federal government still has a long way to go with border security and immigration enforcement. But this isn’t the first time amnesty has looked inevitable and then gone nowhere.

Unlike the 1986 immigration legislation that was openly described as an amnesty, supporters of legalizing most illegal immigrants almost never use the “A” word. They prefer to call their combination of legalization, legal immigration increases, guest workers and some semblance of enforcement “comprehensive immigration reform.”

You will almost never find a candidate in a competitive election describe himself as a supporter of “amnesty.” In many cases, they prefer to talk about the conditions for legalization, rather than the legalization itself.

George W. Bush floated an immigration proposal in 2004 and then quickly shelved it after a hostile conservative reaction. He needed the base to turn out in November. Once safely reelected, he came out for amnesty and guest workers once again.

The Senate passed their comprehensive bill in May 2006 by a vote of 62 to 36. Despite the fanfare, the bill went nowhere in the Republican-controlled House. While some supporters of the bill argued that this contributed to the GOP’s defeat in the November elections that year, Democrats frequently recruited amnesty opponents to run for Congress in reddish districts.

A second, similar immigration bill advanced in the Senate the following year. It prevailed in a motion to proceed by a vote of 64 to 35 in June 2007. Two days later, after an intense populist reaction, the bill failed a cloture vote by 46 to 53. The issue was declared dead for the campaign season—again, odd if it is really so popular.

After the 2008 elections, Democrats controlled both houses of Congress in addition to the White House. They briefly enjoyed a filibuster-proof Senate majority, in addition to a three-fifths majority of the House. These were the supermajorities that, at great political risk, passed Obamacare.

Immigration went nowhere under Barack Obama, Nancy Pelosi and Harry Reid at a time when Republicans had virtually no power to stop amnesty. That should tell you something about its popularity—and the real urgency of executive amnesty.

Don’t judge a politician by what she says, but by what she does. Washington maintains that the people want amnesty. But their behavior suggests they know otherwise.