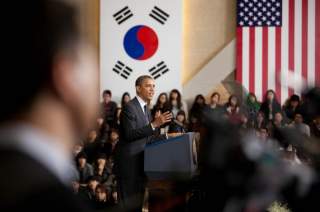 As South and North Korea exchanged artillery fire in late August, the United States rushed three B-2 bombers to Guam. The Obama administration hoped to deter the North from taking military action, but the bigger question is: Why is Seoul still a helpless dependent sixty-two years after the Korean War ended?

Imagine a hostile relationship existing between the United States and Mexico, worse even than if Donald Trump is elected president. The Mexicans pour their limited economic resources into their military and threaten America with war. Washington officials respond by begging Europe and Japan to send military aid.

The Americans would face raucous laughter. After all, the United States has more than two and a half times Mexico’s population. America’s GDP is an even more impressive at fourteen times that of Mexico. Europe and Japan would tell Washington to act like the government of a serious nation and raise the military necessary to protect its people.

Yet the disparity between South Korea (ROK) and North Korea (DPRK) is even larger. The South enjoys a population edge of two-to-one and an economic advantage upwards of forty-to-one. Seoul has stolen away the North’s chief military allies, China and Russia, which would no longer fight for the DPRK. On every measure of national power, save military, South Korea dominates. And it lags on the latter only out of choice.

Indeed, the South has even surrendered control of its armed forces to the United States. Wartime operational control, or OPCON, goes to the American military. Decades have gone by, but the South Koreans say they still aren’t ready to manage their own troops. Some officials candidly admit that they fear taking control might encourage Washington to bring home its forces. Thus, dependence has become a strategy to ensure a continued place on America’s defense dole.

It’s obvious why Seoul takes this approach. Feigning helplessness can be embarrassing, even humiliating. ROK officials occasionally resent American meddling in their defense decisions, including in how to respond to Pyongyang’s ubiquitous provocations. Many South Koreans dislike the inevitable social impact of so many U.S. troops.

Nevertheless, most countries would like to have a superpower pick up a big chunk of their defense tabs. Seoul takes the money saved and invests it in export-oriented industries, education and other domestic programs, and even prestige military assets, such as a blue-water navy designed for use well beyond the Korean peninsula. South Korea would still be prosperous and influential if it had to cover the full cost of its defense, but it would face a tougher set of trade-offs—as does the United States.

The South’s dependent relationship does not benefit America. Military spending is the price of a nation’s foreign policy. The more defense commitments the United States makes, the larger the armed forces it must raise and deploy. The principal burden is not the cost of basing troops in the South, for which Seoul helps pay, but the expense of creating the units, hiring the service members and buying the weapons. The Europeans and Japanese are no more worthy of U.S. defense welfare, which makes the case for radical change all the more urgent. The reason Washington accounts for more than 40 percent of the globe’s military spending is that Americans must pay an exorbitant price to project power far from the United States, even when they have no vital interests at stake.

Equally worrisome is the prospect of using those forces, both stationed on the peninsula and elsewhere in the region or homeland, in a war. North Korea would lose, but the cost would likely be horrendous. A Second Korean War would not be a walkover as were the attacks on Serbia and Iraq (twice). With the realization that regime change would inevitably accompany a U.S. victory, Pyongyang would have no reason to hold anything back.

South Korean civilians obviously would be at risk, with roughly half of the ROK’s population in the Seoul-Incheon metropolitan area. While North Korean infantry and armor would be vulnerable to American air power, the North’s abundant artillery is well dug in and Scud missiles would be hard to stop. Moreover, eradicating all resistance in the North’s forbidding terrain would be “boots intensive.” Americans would pay a high price to make good on Washington’s outdated commitment.

While the prospect of defeat should discourage North Korean recklessness, the Kim dynasty has made provocation and brinkmanship the core of its foreign policy. Unfortunately, mistake or misjudgment could turn a violent act into a general war. That possibility is higher today than in recent years, because Kim Jong-un appears to lack his predecessors’ sure political control and deft provocative touch. Adding instability is the constant reshuffling of top officials, especially in the military, and the atmosphere created by so many demotions through execution. Even the best-laid plans could go badly wrong.

In fact, the B-2s were sent to Guam in response to a recent upsurge in threats from the North, triggered by renewed ROK propaganda broadcasts, which were retaliation for injuries sustained by South Korean troops from a DPRK mine. Although no one believed war was likely, Pyongyang’s rhetoric was more violent than usual and accompanied by a military mobilization. Forty hours of talks were held between the two Koreas which led to a North Korean expression of “regret” and South Korean cessation of the broadcasts.

Everyone breathed a sigh of relief and some suggested that the episode might open the way for further negotiations over the North’s nuclear program. But Kim Jong-un emphasized how the DPRK’s “tremendous military muscle,” including its nuclear weapons, had preserved the nation’s “dignity and sovereignty.” And less than a week later, North Korea emphatically denied apologizing to Seoul. No doubt another crisis is coming, it is only a question of when.

At that point, U.S. officials again will deploy aircraft, carrier groups or other forces to demonstrate “resolve.” If deterrence ever fails, America will find itself in a real war. Van Jackson of the Center for a New American Security argued that the risk of conflict is increasing and the United States should plan for a fight. Defense Secretary Ashton Carter seemed equally pessimistic: “Korea is one of these places that is a tinder box. It’s probably the single place in the world where war could erupt at the snap of our fingers.”

So why is the United States still entangled in the volatile geopolitics of the Korean peninsula?

It’s certainly not because the ROK is incapable of defending itself. Having divided the peninsula with the Soviet Union and refused to arm its client state because of President Syngman Rhee’s threats to attack the North, Washington had little choice but to defend Seoul against the 1950 North Korean onslaught. With South Korea a war-torn wreck and both China and the Soviet Union allied with the North, only a continued U.S. force presence could preserve the 1953 ceasefire. Those worlds disappeared long ago, however. Today, Seoul wants to be taken seriously in the councils of nations. The most fundamental duty of any serious state is to protect its people and territory. The ROK is well able to do so, as is evident from the modest steps it has taken out of concern over potential U.S. military cutbacks.

Some analysts imagine American forces on the peninsula doing double duty, both protecting the South and serving other U.S. interests. President Barack Obama called the two states’ relationship a “comprehensive strategic alliance of bilateral, regional and global scope, based on common values and mutual trust.” However, this is merely empty rhetoric. There’s no cause for garrisoning the Asian mainland. Washington would have no reason to get involved in squabbles among the region’s smaller powers, none of which look particularly dangerous. If a U.S. withdrawal encouraged other nations to do more for their own defense—wrongly derided by some as an “arms race”—rather than rely on America, so much the better.

An army division in Korea wouldn’t be much use in a war with China. Indeed, Seoul would make sure it was of no use, since the ROK would not allow the United States to turn South Korea into a battlefield. Imagine a conflict sparked by a confrontation between China and Japan over the Senkaku/Diaoyu Islands. The South wouldn’t confront Beijing militarily just because Washington foolishly chose to go to war. Indeed, Seoul might be tempted to back Beijing over Tokyo—such is South Korea’s and China’s mutual dislike of Japan. In any case, the South Koreans will have to live with the PRC long after America goes home.

There are areas where the United States and South might want to cooperate militarily in the future—peacekeeping and anti-piracy operations, for instance—but that only requires a shared interest, not a “mutual” defense treaty. And as equals, the two countries could negotiate intelligence sharing, joint exercises, and U.S. access to South Korean bases. On other issues, such as economic development and environmental protection, the military relationship is irrelevant.

So far, Donald Trump is the only presidential candidate to wonder why Washington has so many foreign welfare clients. A couple years ago he commented: “I keep asking, how long will we go on defending South Korea from North Korea without payment?” More recently, he observed that when “the young man from North Korea starts acting up and having one of his fits, we immediately get our ships going. We get our aircraft. We get nothing for this.”