Next Stop Berlin? Moscow's Nazi-Killing Tank Unit is Back 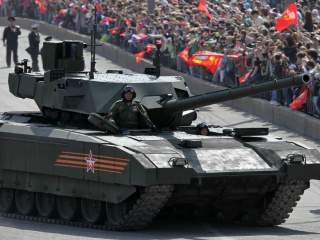 More than seventy years after it helped to destroy Nazi Germany, Russia's most famous tank unit is back.

Moscow has reactivated the First Guards Tank Army, one of six tank armies formed by the Soviet Union during World War II as the mobile, hard-hitting spearhead of the Red Army's offensive into Germany. During the Cold War, the First Guards Tank Army was stationed in East Germany as part of the Group of Soviet Forces in Germany (GSFG), where it would have been the vanguard of a Warsaw Pact drive into Western Europe.

The formation was disbanded in 1998, during Russia's post–Cold War defense cutbacks. Resurrecting it now and stationing it in western Russia, amid NATO moves to position troops and equipment in Eastern Europe, may be Moscow's way of reminding the world what happened the last time a Western nation went to war with Russia.

The new First Guards Tank Army comprises the Fourth Guards Kantemirovskaya Tank Division, the Second Guards Tamanskaya Mechanized Infantry division, the Sixth Tank Brigade and the Twenty-Seventh Sevastopolskaya Mechanized Infantry Brigade. Despite being designated an “army” in Soviet and Russian nomenclature, the unit is only equivalent to a corps-sized formation in Western armies, with around five hundred tanks, including T-72B3s, T-80s and possibly the T-14 Armata. The army will be stationed in Russia's Western Military District, where it would likely to into action in the event of a conflict in the Baltic states, Ukraine or Poland.

At the same time, Moscow is also forming three new divisions, to be deployed in western Russia. Defense site Southfront.org, which frequently writes about the Russian military, suggests that these moves reflect a change in Russian military doctrine toward forming larger formations designed for conventional mechanized warfare—à la World War II or the Cold War—rather than ad hoc units hastily put together for small conflicts. “The fighting in Ukraine demonstrated the advantage of having large and permanently established maneuver formations,” Southfront writes. “Independently operating battalions, regiments, and brigades lacked the ability to deliver a knock-out punch, and coordinating a large number of such units was difficult for higher headquarters.”

As for the symbolism of reactivating the 1st Guards Tank Army, I asked David Glantz, dean of Western historians who study the Soviet military in World War II, and a scholar who has enjoyed rare access to Russian military archives.

The "1st Guards Tank Army was arguably the most famous of the six tank armies the Soviets formed during the Soviet-German War," Glantz wrote. Commanded by General Katukov from its formation on February 7, 1943 until the war's end, it played a key role in the battle of Kursk, operations in Ukraine from late December 1943 through April 1944, the advance through Poland from mid-July 1944 through January 1945, and the advance on Berlin in April 1945. It earned its "Guards" designation, awarded to units that performed well in battle, on April 25, 1944, for leading the Red Army's dash through western Ukraine to the Romanian border, in the process encircling the German First Panzer Army, although the remnants of that German army managed to escape westward from the trap.

“It also led the spectacular Soviet advance from the Vistula River to the Oder River in January 1945, at the end of which it seized bridgeheads across the Oder only 40 km from Berlin. In April 1945, it led the drive on Berlin, in the process encircling the city together with 2nd Guards Tank Army,” Glantz wrote. “Its record was so spectacular that the army formed the nucleus of the Soviet Group of Forces in Germany (GSFG) from 1946 through the end of the Cold War and the collapse of the Warsaw Pact.”

"The Russians understand its significance, and so do the Byelorussians and Ukrainians," he added.