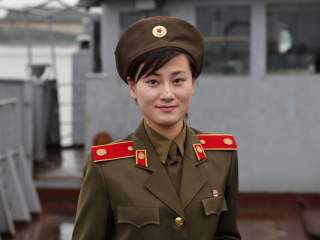 North Korea was not officially on the agenda of the just-completed Nuclear Security Summit in Washington. The absence of any reference to North Korea in the summit communiqué is no surprise. But President Obama used the occasion to restate his objectives vis-à-vis Kim Jong-un’s regime, and to signal that the Chinese president and the prime ministers of Japan and South Korea, with whom he met on the margins of the summit for some joint hand-wringing, shared those objectives.

In a scene-setting Washington Post op-ed, the President described his aim as “the complete and verifiable denuclearization of the Korean Peninsula in a peaceful manner.” The phrasing is, to say the least, diplomatic. It sidesteps the nasty issue of North Korea’s work on intercontinental ballistic missiles. The inclusive reference to the “Korean peninsula” presumably is designed to avoid pointing fingers, even though South Korea has been militarily denuclearized since late 1991, thanks to then president George H. W. Bush’s decision to remove all U.S. nuclear weapons. And the emphasis on “a peaceful manner” is probably welcome in Pyongyang, after calls in the United States for clearer threats of use of force to deter North Korean acquisition of nuclear weapons capable of threatening the U.S. homeland. The president is leaving open the door to a negotiated solution with the North Koreans, even though the history of past attempts is a chronicle of frustration.

I already had been wondering, in fact, whether the administration, with almost ten months left to go in office, would try a dramatic shift in course vis-à-vis North Korea, along the lines of our new relationships with Iran and Cuba. As a devoted fan of Cuban cuisine, I appreciated the President’s reference to ropa vieja in his speech at Havana’s Gran Teatro on March 22. But my thoughts went immediately to bulgogi and kimchi. (I admit my ignorance of specifically North Korean cuisine, assuming such a thing exists.) It struck me that much of what the President had to say in Havana could serve as a blueprint for reconciliation with North Korea as well. One totalitarian state ruled by a family dynasty is much like another, after all.

In Havana, the president admitted the failure of long-standing U.S. policy, an uncharacteristic move for a U.S. political leader: “What the United States was doing was not working. We have to have the courage to acknowledge that truth.” He had taken much the same approach in selling the Iran nuclear deal to the U.S. and international publics. Why shouldn’t we “own” our failure vis-à-vis North Korea in the same way? Is it some sort of second-rate pariah state? After all, unlike the Iranians, the North Koreans actually have gotten all the way to nuclear weapons, and they seem to have missiles with longer ranges. And Cuba had to content itself merely with hosting Soviet nuclear weapons at one point. I’m sure the North Koreans feel some credit is due to them.

Perhaps what was lacking in our approach to North Korea was respect and reassurance. Already in his Havana speech, Obama stated clearly that President Castro “need not fear a threat from the United States,” and implied respect for Cuban sovereignty and self-determination. One could build an argument that we have exaggerated both the Cuban and North Korean threats to us, leading us inter alia to maintain in the Korean Peninsula a vast arsenal of landmines, at considerable political cost to us, since the overwhelming majority of countries have banned them as especially heinous. From 1988 to 2008, we listed North Korea as a “state sponsor of terrorism,” though it actually was not known to have sponsored any terrorist acts during that period. From 1982 to 2015, Cuba was on the same list, similarly with no real impact. (Of course, the state sponsors list does not have all that much to do with terrorism.) At times, we have accused both Cuba and North Korea of possessing or intending to acquire biological weapons, though always inconclusively. Something else that Cuba and North Korea have in common, though, is a history of being unable to feed their people, and frankly neither has a viable economy. That doesn’t add much to their scariness quotient.

Admittedly, unlike Cuba, North Korea has the largest army relative to population of any country on earth, routinely attacks the territory and vessels of another state, and issues thoroughly over-the-top threats. But perhaps we just need to “contextualize” North Korea’s hostile gestures correctly, and try to view things from their perspective. True, it was the North that invaded the South in 1950, initiating three years of fighting. But isn’t that piece of history much more “ancient” than Iran’s taking of U.S. hostages in 1979, which we managed to set aside? From Pyongyang’s perspective, it was only trying to reunite the Korean people, who had been divided during the Second World War by circumstances beyond their control. And when it comes to perpetuating an unstable situation on the Korean Peninsula, without an actual peace treaty, the finger pointing is mutual.

In Havana, on the other hand, President Obama emphasized the need to put the past behind us, and to find common ground between erstwhile adversaries. He described his objective in visiting Cuba as “bury[ing] the last remnant of the Cold War in the Americas” (a major applause line). Reconciliation with North Korea could just as easily be portrayed a way of “burying the last remnant of the Cold War in Asia.” To be fair, when it comes to political and economic systems, it’s hard to find two countries less compatible than North Korea and the United States. But why should that be an obstacle to constructive relations? For the moment, at least, we still lack a religious police like Saudi Arabia’s, but that doesn’t mean we can’t be friends.

Obama’s visit to Cuba paved the way. By focusing there on reconciliation “despite. . . differences” in political and economic systems, the president set a precedent that could work vis-à-vis Pyongyang as well. It also had the important diplomatic virtue of clarity, indicating that matters such as human rights and freedom of expression would not be high-profile concerns in bilateral relations. (The fact that North Korea has an even broader definition of “dissident” than the Cuban regime, and does not dawdle in physically eliminating such elements, will help reduce occasions for pointed questions regarding definitions and lists of “political prisoners.”)

The administration could pivot from focusing on a common “American” identity between the United States and Cuba, and instead suggest a common “Asian-Pacific” identity for the United States and North Korea. In his Havana speech, the president boiled down the shared history of the Americas to European colonialism and slavery. It’s hard, admittedly, to find such a simple formula for the Asia-Pacific region. I just hope we don’t dredge up the period in which the United States and the Korean Communists, to some degree, shared a common adversary (Japan) during the Second World War. But it would not be the first case in recent times of our “disrespecting” an important ally in making nice to a long-time adversary.

In Havana the president spoke—one must admit, eloquently—of “barriers of pain and separation.” Such barriers are no less real in the Koreas than they are in our own hemisphere. Even though the main barrier in the former case is between North and South Korea, it is objectively a barrier the United States helped create. Of course, if we had left the whole Korean peninsula to Soviet occupation at the end of World War II, we now would have a gigantic version of North Korea to deal with. Between 1945 and 1953, an estimated nine hundred thousand people (10 percent of the North Korean population) moved to the South, with negligible movement from the South to the North. Once again, a striking analogy with the Cuban situation, just with the compass points reversed.

The point from the Havana speech about how the president “believe[s] in the Cuban people,” which garnered thunderous applause, admittedly would need some careful phrasing for use with Pyongyang. Stressing our belief specifically in the North Korean people might help avoid having our reconciliation efforts interpreted as a green light for another attempt to unify the Korean people, i.e. the populations of North and South, along the lines of 1950.

As with Cuba, we should be able to find something positive to accentuate in our discussions with Pyongyang. The “sense of patriotism and a sense of pride” that the President found in Cuba appear to be strongly enforced in North Korea as well. The “commitment to. . . education” found in Cuba is strong in North Korea too. Indeed, the CIA World Factbook reports a literacy rate of 100 percent for both males and females, along with a fertility rate (1.97 percent) much higher than that of our West European allied countries, coupled with easy access to contraception. As noted in Cuba, love of family is clearly strong. It may be best to stay away from religion, however, since North Korea does not practice separation of church and state. The government actually sponsors religious groups, though we may find them somewhat eccentric.