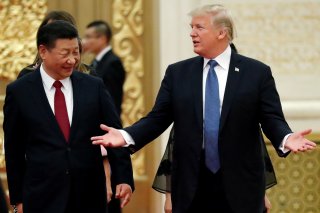 My core views on U.S.-China relations can epigrammatically be summarized in nine single sentences:

1. China seeks to replace the United States as the most important and influential nation in the Indo-Pacific region and to dominate that region.

2. China’s tactics will change over time, its strategic purpose will not.

3. The crucial variable regarding whether China is successful in its strategic purpose is U.S. domestic, economic, military and diplomatic strength and resolve, and not Chinese actions.

4. The United States with its allies and partners can successfully compete with China, and there is no reason for intrinsic pessimism.

5. The United States and China are well on their way to permanent confrontation, which could eventually lead to war.

6. Taiwan is a loaded gun pointed at the head of both China and the United States, and some in both countries and in Taipei want to test Taiwan’s hair-trigger.

7. Neither Beijing nor Washington currently seems interested in using diplomacy to arrest the potentially catastrophic decline in their relations.

8. Regarding the United States and China, there will be no grand bargain on world order, no strategic modus vivendi, no accepted rules of the road, no staying in agreed lanes, because they are too far apart on their national interests and values.

9. Instead, the two nations will be on the edge of crisis for decades, and only quality diplomacy on both sides will rescue them from likely tragedy.

As Ernest May taught us, history is the most common form of evidence and reasoning in forming public policy, filled with questions and insights for us, so let’s go to history.

Henry Kissinger observes that the current state of U.S.-China relations reminds him of the period before World War I when Europe’s leaders would not have made the decisions they did if they had known the horrible consequences—twenty million dead.

To remind, here briefly is what happened.

• 1904: The Entente Cordial is agreed between France and Britain.

• 1905–1906: The First Moroccan Crisis occurs over who controls Morocco: France or the Sultanate supported by the Kaiser.

• 1907: The Anglo-Russian Convention is signed.

• 1911: The Second Moroccan (Agadir) Crisis takes place, in which the presence of French troops in Morocco leads Germany to demand territorial compensation.

• 1913, The First Albanian Crisis pits Montenegro and Serbia against the Ottoman Empire.

1914, The 'Great Powers' of Europe have already come close to war several times thanks to the Balkan, Moroccan and Albanian disputes. Each crisis makes it more difficult to manage the next one.

Friends, using this World War I Applied History approach, what year is it now regarding the present interaction between the United States and China?

How worried are you? Is Andrew Marvell’s Time’s Winged Chariot on our heels?

With Ernest May still in mind, here is another pertinent date: July 8, 2021, is the fiftieth anniversary of Henry Kissinger’s visit to Beijing, and his talks with Zhou Enlai—twenty hours over three days.

These were the characteristics of those meetings:

They were led by high-level representatives clearly underwritten personally by the two leaders.

They were private, away from the glare of the press.

They were mutually respectful.

They did not challenge the forms of governance of the other side.

They did not dwell on human rights.

They were dedicated to strategic exchange, individual problem solving, and compromise.

As I think of Ernest May, the Guns of August and our species’ penchant for tomfoolery, majestic myopia and both spontaneous and studied miscalculation, the Kissinger/Zhou Enlai approach seems to me a reasonable formula for U.S.-China negotiations today.

But how much time do we have before those winged chariots crush us?

Robert D. Blackwill is the Henry A. Kissinger Senior Fellow for U.S. Foreign Policy at the Council on Foreign Relations.