No, China's Communist Party Is Not Running on Borrowed Money 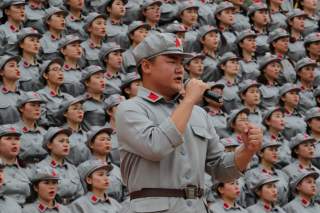 WHEN CHINESE leader Mao Zedong died in 1976, Chinese communism perished with him. Mao had always suspected his successor, Deng Xiaoping, of being a “capitalist roader.” In a sense, he was right. It took a couple of years for Deng to cement his place at the top, but he ultimately emerged victorious at the famous “Third Plenary” meeting of the Communist Party’s central committee in December 1978. On December 18, the meeting opened in Beijing. On December 19, Coca-Cola held a press conference in Atlanta to announce it had signed an agreement to reenter the Chinese market. On the same day in Seattle, Boeing announced the sale of three 747s to Air China.

By the time the Third Plenary closed on December 22, the leadership of the Chinese Communist Party (CCP) had formally committed to “conscientiously transforming the system and methods of economic management” by giving “local authorities and industrial and agricultural enterprises ... greater power of decision in management”—though of course all “under the guidance of unified state planning.”

The 1978 Third Plenary launched China on a forty-year trajectory of reform, opening and epic economic growth. The Chinese economy grew by a factor of thirty-five times between 1978 and 2018, according to official data. If you don’t trust the official numbers, scale that down to thirty times or twenty-five times. Lop a layer off the top to account for the simple remonetization of the economy in the first two decades of reform, as social services like food and housing that were once provided for free came to be bought on the market (and thus included in GDP). Make any adjustments you want; it doesn’t make any meaningful difference. The U.S. economy grew by a factor of 2.9 times over that period; large developing countries like Mexico (2.6) and Brazil (2.3) even less, according to data from the International Monetary Fund. China’s arch-rival India grew by a factor of twelve. By any measure, and despite many caveats, reform-era China has been the world champion of economic growth.

After four decades of unprecedented growth though, China’s economy is finally leveling off. Officially, the Chinese economy is still growing at a very respectable 6.5 percent, but no one who seriously studies it really believes that. Growth probably stalled at the end of 2015, when exports were falling, value-added tax receipts were flat and the purchasing managers’ index (PMI) was pointing toward a recession. Faced with a slew of bad statistics, the CCP took the easy way out: it fired the statistician. The director of the National Bureau of Statistics, Wang Bao’an, was charged with corruption and removed from office. The new director, Ning Jizhe, just happened to be the person in charge of setting China’s economic targets in the first place. The PMI immediately shot back up and China’s wobbly GDP statistics leveled off.

But falsifying statistics does not shift stock or sell cars. China’s smartphone sales were down 15.5 percent in 2018, according to official data from the China Academy of Information and Communications Technology. Sales of passenger vehicles were down 4.1 percent, according to the China Association of Automobile Manufacturers. China’s trade surplus fell by 16.8 percent. Bad loans are mounting, housing units are sitting empty, the university graduate job market is sluggish and Western entrepreneurs—professionals and charlatans alike—are leaving China in droves. None of this sounds like an economy growing at more than twice the rate of the United States.

In a desperate attempt to keep the economy growing, China is rapidly inflating the mother of all credit bubbles while hoping for a miracle to deliver it from the inevitable reckoning. China’s leaders refuse to face reality and accept that, after forty years of seemingly effortless economic growth, the party has finally come to an end. The CCP seems deathly afraid of facing up to even a mild recession. But why? It’s not like the end of the economic party means the end of the Communist Party.

The strange thing is that many people within China, and even within the CCP, believe that it just might. Hampered by ideological blinders and haunted by their own family histories, CCP leaders have bought into the mythology of their extraordinary skill as economic managers. They have relied on economic growth to justify Communist Party dictatorship for so long that they don’t think they can stay in power without it. They have enthusiastically embraced the doctrine of “performance legitimacy”: the idea that economic success legitimizes one-party rule in China, and that without it the country could break out in some kind of spontaneous combustion like the Cultural Revolution of Mao’s final years or the Tiananmen Square protests of 1976 and 1989. The performance legitimacy theory is accepted by figures as diverse as maverick Peking University law professor He Weifang, American China-hawk Gordon Chang, British China-booster Gideon Rachman and, according to China politics expert Bo Zhiyue, Chinese president Xi Jinping himself. But is it true?

PERFORMANCE LEGITIMACY is one of those ideas that finds its place in history and seizes it. No one in particular seems to have invented it or originally defined it, much less demonstrated that it really exists. It has always been used with the more or less common sense understanding that a government is legitimate if it delivers the goods. The term first began to bubble up in academic books and journals in the 1980s, but it really took off after Samuel Huntington made it a centerpiece of his 1991 book, The Third Wave: Democratization in the Late Twentieth Century. In a related article for the Journal of Democracy, Huntington applied the idea to the Asian Tiger economies and the often authoritarian parties that governed them:

Western democratic systems are less dependent on performance legitimacy than authoritarian systems because failure is blamed on the incumbents instead of the system, and the ouster and replacement of the incumbents help to renew the system. The East Asian societies ... had unequalled records of economic success from the 1960s to the 1980s. What happens, however, if and when their 8-percent growth rates plummet ... ? In a Western democracy the response would be to turn the incumbents out ... [but if] the structure of political competition does not allow that to happen, unhappiness with the government could well lead to demonstrations, protests, riots, and efforts to mobilize popular support to overthrow the government.

Though Huntington was writing about Singapore, South Korea and Taiwan, the implications for China were clear.

Huntington’s influence was at its greatest just as the first big wave of Chinese students swept into U.S. political science departments in the late 1990s and early 2000s. Those students would have read Huntington’s essays on democracy, as well as his 1996 book, The Clash of Civilizations, in which he explicitly linked the idea of performance legitimacy to post-Tiananmen China. Those very students are now the middle-aged academics, think tankers and Party strategists who form the intellectual vanguard of the Chinese regime. They have turned out dozens of academic papers, in English as well as Chinese, arguing that performance legitimacy is the glue that holds China together.

Huntington was a brilliant scholar, but not one well-known for his magnanimity in citing rivals. Like previous would-be discoverers of performance legitimacy in the 1980s, Huntington didn’t give any source for the idea. Nonetheless, every political science ph.d. student knows exactly where it came from: a classic 1959 article by Seymour Martin Lipset called “Some Social Requisites of Democracy.” In what has become the single most cited article ever published in the American Political Science Review, Lipset wrote, “Legitimacy involves the capacity of a political system to engender and maintain the belief that existing political institutions are the most appropriate or proper ones for the society.” He saw legitimacy as a substitute for effectiveness, since “the degree of legitimacy of a democratic system may affect its capacity to survive the crises of effectiveness, such as depressions or lost wars.”

In Lipset’s formulation, effectiveness didn’t confer legitimacy on a government. Effectiveness helped a government stay in power without it. The whole idea of “performance legitimacy” is nothing more than “effectiveness” with a little extra dignity. Writing in the shadow of the Holocaust, Lipset couldn’t very well have said that Nazi rule was legitimated by Germany’s strong economic performance in the 1930s—even if, for many admirers of Germany at the time, it was. But with the passage of time, legitimacy became a less loaded word. Cold Warriors thought Soviet rule illegitimate in occupied countries like Hungary and Czechoslovakia, but perhaps less so in Russia itself. In the era of decolonization, many developing countries established quite unsavory forms of government, but it may have seemed disrespectful (or even racist) to question their legitimacy. Performance legitimacy was a way to let non-Western dictatorships off the democratic hook, so long as they delivered the goods.

Reeling from the 1989 challenge in Tiananmen Square and desperate to restore its legitimacy in the eyes of the world, the CCP of the 1990s was ripe for the idea. It went after performance legitimacy with a vengeance. It even turned the idea on its own people. By the early 2000s, it was becoming increasingly difficult to inspire patriotism by trotting out ninety-year-old veterans of the Long March, and appeals to Marxism-Leninism were clearly farcical. The CCP needed something new, and it found it in the 2008 Beijing Olympics, the 2010 Shanghai Expo and endless economic growth. Perhaps egged on by Nobel Prize-winning economist Robert Fogel’s 2007 prediction that, by 2040, China would reach a GDP per capita of $85,000—and that was $85,000 in year 2000 dollars, equivalent to $127,000 today—China’s leader Hu Jintao wrote the goal of “building a moderately prosperous society” right into the CCP constitution. It remains there to this day.