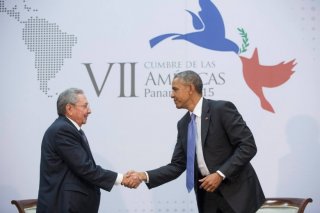 At the Summit of the Americas, President Obama took the next crucial steps in his quest to normalize relations with Cuba. Not only did he have a cordial meeting with Cuban leader Raul Castro, he announced that Cuba would be removed from the U.S. list of states that sponsor terrorism. Both actions have been long overdue.

Predictably, Obama’s rapprochement with Cuba has drawn fire from hard-line hawkish elements in the United States. When the initial reports surfaced in December 2014 that the administration intended to seek diplomatic ties with Havana, outspoken conservatives blasted the move as appeasement of a brutal dictatorship and a betrayal of the oppressed Cuban people. Senator Marco Rubio (R-FL), the son of Cuban exiles, was especially caustic in his assessment. Critics renewed and intensified such allegations following Obama’s latest initiatives.

But even conservatives do not constitute a solid bloc opposed to a new relationship with Cuba. Several GOP senators, including Jeff Flake of Arizona and Rand Paul of Kentucky, promptly signed an open letter expressing support for Obama’s action.

Flake and other conservative legislators also co-sponsored a bill that would lift most components of the economic embargo that has been in place since the beginning of the 1960s. Moreover, officials of both the U.S. Chamber of Commerce and the agricultural lobby seem receptive to ending Washington’s economic cold war against the island nation. They realize that Cuba could become again what it was in the pre-Castro era: a significant market for American agricultural exports (both Kansas Republican senators signed the Flake-Paul letter), an attractive tourist destination and a potential arena for a wide range of U.S. investments. Economic incentives are working against the agenda of those factions that want to maintain the embargo.

Obama’s rapprochement policy also is receiving widespread praise from governments and opinion leaders throughout Latin America. The sense of relief in those societies is almost palpable.

The U.S. policy of trying to isolate Cuba received some support in Latin America during the Cold War (especially from right-wing authoritarian governments), but there were always dissenters, even during that era. Mexico, for example, ostentatiously maintained diplomatic and economic links with Havana. And once the Cold War ended, few Latin American governments saw any wisdom in Washington’s stubborn persistence. Obama’s drive to end the isolation policy is welcomed by hemispheric leaders weary of being caught in the middle of the feud between the United States and Cuba.

The adoption of a new approach is long overdue. Washington’s current strategy has been in place for some fifty-five years, yet it has spectacularly failed to achieve its objective of bringing down Cuba’s communist government. One wonders what the proponents of staying the course hope to accomplish. Do they believe that the fifty-sixth year—or the maybe the sixtieth or eightieth year—will be the charm? At some point, persisting in a policy that is clearly not working constitutes nothing more than being obstinate. We reached that point in our Cuba policy several decades ago.

Critics are especially upset that the Obama administration is willing to remove Cuba from the list of state sponsors of terrorism. But there is little credible evidence that Havana has been involved in promoting terrorist activity at any time during the past two decades—something that even U.S. officials concede. If a government is on the terrorist sponsor list, it ought to be guilty of, well, sponsoring terrorism. Otherwise, the list simply becomes a cynical diplomatic device for bashing regimes we don’t like.

The argument that Washington should not have normal relations with the Castro regime because it represses the Cuban people has scarcely more merit. No one denies that the Cuban government is brutal and autocratic. But the United States does not have the luxury of maintaining ties only with enlightened, democratic countries. If we insist on that standard, the number of embassies on Washington’s famed embassy row would be much diminished. And many conservative critics of Obama’s Cuba initiative are strangely selective in their sense of outrage. Few of them condemn ties with such brutal autocracies as Egypt and Saudi Arabia. Moreover, many of the older critics were cheerleaders for Washington’s alliances with Cold War–era tyrants like the Shah of Iran, Anastasio Somoza, Mobutu Sese Seko, and Ferdinand Marcos.

President Obama deserves criticism for his handling of some foreign-policy issues. His decision to escalate the war in Afghanistan, his administration’s clumsy actions that provoked a needless confrontation with Russia, and his continuing flirtation with deepening U.S. military involvement in Syria and Iraq should be at the top of the list. But he deserves praise for his willingness to abandon hoary policies elsewhere that have clearly failed. His courageous move to seek a more constructive relationship with Iran is one example. So, too, is his decision to defy the powerful Cuban-American lobby and myopic conservatives and establish normal ties with Cuba.