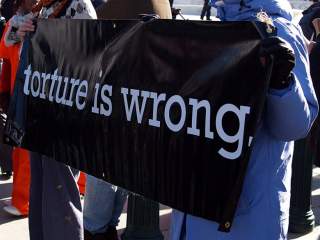 The Senate Intelligence Committee's report on the Central Intelligence Agency (CIA) detention program is generating significant public debate concerning what is and what is not interrogation-related torture. There are camps on both sides of the issue. Some believe any behavior that denigrates an individual’s essential human dignity is abhorrent, if not unlawful. Others believe there are “less severe” interrogation techniques, such as waterboarding, that do not constitute what is generally understood to be inhumane and are therefore justified during war. I have been on the receiving end of waterboarding techniques and can attest that it is inhumane and constitutes torture.

The objective of torture is to take total control of the victim. It is the art and science of breaking the will of another human being. The victim is rendered incapable of defending him or herself. Helplessness is magnified by pain, terror and humiliation. In totalitarian states, it is the most efficient weapon against freedom. You start with the threat of imminent death, accompanied by agonizing pain. In my case, naked, I was forced to dig my own grave while pelted by descriptions of the excruciating pain I was going to endure and the slow death I would experience. Such preliminary mental-torture tactics rob a human being of his dignity and his ability to resist physical humiliation and pain.

Physical violence usually precedes waterboarding, a sort of softening of the victim’s belly. I was stripped, beaten, deprived of sleep, water and food, and forced to lie on the floor, feet raised with my head slightly below the level of my feet. A piece of soaked cloth was thrown on my face, and fetid water was poured through the cloth to slowly drip into my mouth. This technique causes the fluid to build in your lungs. A key element of waterboarding is the ability to bring the interrogated to the verge of death without actually killing the person. That is what makes a good “interrogator.” I was lucky in this regard; my torturers were masters of their trade.

Waterboarding is often described as a simulated drowning or a technique “to convince the interrogated that he or she is drowning.” There is no way to simulate the lungs filling with fluid and the victim does not need to be convinced physiologically. They are in the process of drowning.

Waterboarding is difficult to understand absent first-hand experience. In order to fully appreciate the exquisite brutality of this human torture, a person must know what it is like to be totally at the mercy of his tormentors, his will broken, stripped of his dignity and humanity, feeling the horrendous pain of the nauseating liquid involuntarily filling his lungs, and the complete loss of hope. In this state, the tortured is assailed with reminders this near drowning will happen repeatedly and will eventually culminate with that promised slow and agonizing death. In spite of my frenzied fight to survive, I prayed so many times for death and the deliverance from pain. Waterboarding is a controlled death; I died multiple deaths, three times each day, for seventeen days.

Waterboarding, like other torture methods, makes you talk. You talk a lot; say anything, absolutely anything to get the torture to stop. You throw up a lot, you talk, you scream like a demented person whenever you can, and you throw up again. You give all the answers you think your torturer wants, and more, but not much is true, precise, actionable intelligence. Torture transforms the victim into a fanatical and fierce opponent. Torture taught me the most corrosive diseases of the soul: hatred and revenge.

Waterboarding is a favorite torture method, because it does not leave visible and apparent lesions. The worst scars are in the mind. Human Rights Watch writes that, “…victims of waterboarding suffer prolonged mental harm for years and even decades afterward.” It took me years to overcome never-ending nightmares and decades to come to grip with the issue at a personal level.

To what degree enhanced interrogation methods produce “actionable” intelligence in our war on terror is open to speculation. But personal experience has convinced me that often the information that is sought is not necessarily the information received. The war on terror is fundamental to American and international security. However, resorting to torture, under any guise or condition, damages our credibility and is anathema to American values and the character of its citizens. Winning the protracted war on terror is heavily dependent upon our national humanity and dictates we explore other means of securing and protecting our national interests.

Remy Mauduit is the editor of the Africa & Francophonie edition of Air University’s Air & Space Power Journal, at the Air Force Research Institute, Maxwell Air Force Base in Montgomery, Alabama,. Mr. Mauduit is a Chair of Guy Wyser-Pratte French Institute at the US Marines Corps University, and a lecturer at a number of US Armed Forces Schools. A native of Algeria, he was an Algerian nationalist engaged in the 1954-1962 Algerian War and suffered torture during the struggle for power among the Algerian insurgent leaders. Mr. Mauduit (Madoui) is the author of “J’ai été fellagha, officier français et déserteur” (I was an Insurgent, French Officer and Deserter), (Paris, France : Les Editions du Seuil), April 4, 2004, and several articles in English and French about insurgency and counterinsurgency. The views expressed in this article are those of the author and should not be construed as carrying the official sanction of the DoD, the Air Force or other agencies of departments of the U.S. government.