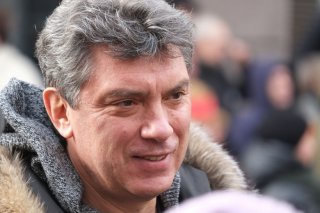 It has been quite instructive to peruse Russian media coverage of the murder of former deputy prime minister and opposition political leader Boris Nemtsov. Russian television is broadcasting up-to-the minute stories on the investigation and memorial marches, as well as retrospectives on Nemtsov’s career in post-Soviet Russian politics. Of course, the latter allows for a backhanded endorsement of Vladimir Putin’s efforts to restore and rebuild Russian power after the economic calamity of the 1990s, and to reinforce the narrative that the pro-Western politicians of the Yeltsin-era were complicit in Russia’s degradation.

The commentary about Nemtsov’s assassination on the Great Stone Bridge (within walking distance of the Kremlin itself) is most revealing. To be sure, we have the usual spread of conspiratorial explanations and innuendos (Nemtsov was killed by the CIA as a provocation against the Putin administration; or the murder was a result of peccadillos in his personal or professional life).

What is more interesting, however, is the emergence of two distinct explanations for Nemtsov’s death: one, that he was killed by Islamists (a charge bolstered by the revelation that the car used by the assassins reportedly had license plates from Ingushetia— a predominantly Muslim region in the troubled North Caucasus) or that he was targeted by Russian nationalists, who view his stance on Ukraine as treasonous.

What is interesting about both lines of thought is how they can be utilized to bolster Kremlin initiatives. Blaming Nemtsov’s murder on Islamist extremists would help justify new security measures as well as make the case that Russia also faces the same dangers of extremism that led to the recent attacks in France and Denmark. On the other hand, the Russian nationalist card provides a pretext for a crackdown on movements that have grown in strength and influence in the last year because of the crisis in Ukraine, and which might ultimately pose a threat to the Kremlin— particularly if the Putin administration agrees to a compromise settlement at some point in the future.

Of course, even in the Russian media, the coverage leaves open the question as to whether Nemtsov’s death was authorized or sanctioned by the authorities. Kremlin spokesmen have strongly denied this— noting that Nemtsov posed no threat to a Russian President who enjoys 80 percent plus approval ratings— and have pledged that all efforts will be undertaken to find the real killers. Putin will personally lead the investigation into his death, the Kremlin has said.

Nemtsov’s murder within sight of the Kremlin walls has sent profound shock waves through the Russian political system. Nemtsov was scheduled to lead a march in Moscow on Sunday to protest Putin’s policies in Ukraine. His death is a clear reminder that the stakes have gone up.

Certainly, among many of the educated business class in Moscow, St. Petersburg and other urban centers, there is considerable disquiet about how Russia's Ukraine policies and the subsequent Western sanctions have negatively impacted Russia’s economy. But now this sub-rosa opposition has to decide whether it is perhaps worth risking life itself (rather than just the prospect of an unpleasant encounter with police) to register that disapproval. It will not escape notice that Nemtsov’s notoriety and extensive rolodex of Western contacts did not protect him, just as they did not help Mikhail Khodorkovsky a decade ago. It also suggests that, having weathered the first round of Western sanctions, the Kremlin may now feel much less restrained in having to accommodate Western preferences when conducting policy.

It is also a warning shot to Western politicians who have been far too glib in their public pronouncements that sanctions on Russia (coupled with falling oil prices) will produce conditions in Russia for a colored revolution. Given Nemtsov’s ties to former Ukrainian president Viktor Yushchenko, the co-architect of the Orange Revolution, the possibility that the Russian opposition might seek to replicate that pattern in Moscow will not have escaped the Kremlin. If worsening economic conditions do begin to generate significant unrest in Russia, then steps to prevent any sort of “government in waiting" from taking shape makes sense. If there are massive protests on the Manezh in Moscow, no U.S. diplomat will be walking through the crowds and discussing the names of potential candidates for key government positions in a post-Putin administration.

Nemtsov’s death may tip the scales for additional American sanctions on Russia, given that a new set of measures was already being contemplated after separatists seized Debaltseve. It most certainly strengthens the argument that no normalization of U.S.-Russia relations is possible as long as Putin remains in the Kremlin. But it also suggests that the hope of finding an acceptable "exit ramp" to de-escalate the crisis is fading. Putin has staked his political survival and the survival of his government on halting the expansion of the Euro-Atlantic world eastward. Ukraine is not a game he is prepared to lose gracefully. We ignore this point at our peril.