No, Hillary Clinton's Foreign Policy Judgement Isn't As Good As Everyone Says 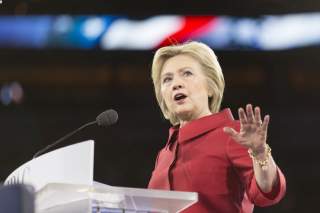 When it comes to national-security issues, Hillary Clinton seems to win by a slam dunk. After decades as first lady, senator and secretary of state, she would bring an experienced, steady, knowledgeable hand to guiding U.S. foreign policy in a period of international stress and conflict. A President Donald Trump would bring no experience and very limited knowledge to the task. Experience and knowledge outweigh inexperience and ignorance every time—right?

In reality, either of these candidates could get the United States into serious trouble over the next four years. Experience may not be the best indicator of whether national-security policies are wise, steady and successful. Temperament and judgment may be as or even more important. Trump fails both tests, and Clinton fails the second. Which means American national security may be in trouble.

Let’s put the experience thing to rest first. Historically, foreign-policy experience has not always been what it is cracked up to be when it comes to directing U.S. foreign policy. With the notable exceptions of Eisenhower, Nixon and Bush the elder, every president elected since the death of FDR in 1945 has actually had very little or only superficial experience in the details of U.S. foreign and security policy.

Success in securing the American national interest is not well correlated here. Ike was great, but he also brought us the Iran and Guatemala coups d’état, which still bedevil U.S. foreign policy. Truman built the policies and institutions that contained the Soviet Union for forty-five years, but that also started us on our present progress to a national-security state. Kennedy had the Bay of Pigs, but also the Cuban missile crisis. Nixon recognized China and negotiated arms control with the Soviets, but prolonged the Vietnam war, after Johnson had escalated it significantly, and supported the overthrow of a democratically elected leader in Chile. Carter advanced human rights and failed in Iran. Reagan sunk into Iran–Contra and experienced the beginning of the end of the Cold War, while Bush the elder ended that twilight struggle but got us into the Somali mess. Clinton made that mess worse, while he helped a difficult transition in the Balkans. Bush the younger made the most dreadful and catastrophic mistake of the new century by invading Iraq, but his HIV/AIDS program was very successful. It is too early to settle Obama’s legacy, but it is clearly mixed, particularly in foreign and security policy.

It appears that experience is not enough, and in some cases (like Vietnam), of little use in telling us who will be a great steward of foreign and security policy.

Likewise, while the stance a candidate takes on foreign-policy issues may seem a good indicator (more on that below), it can be outright misleading. Every candidate in the past twenty-four years has committed to confronting China; not one of them has once in office. But views on issues can give an indication of what matters even more—that second criterion, temperament and judgment.

Trump’s policy judgment appears to break with seventy years of U.S. foreign-policy commitments and alliances, potentially remove U.S. military forces in some areas overseas, contemplate the expansion of nuclear-weapons states, tear up the Iran nuclear agreement, halt immigration into the United States of entire groups of people, end nation-building activities while supporting dictators in other countries, confront China, and add significantly to the size and cost of the U.S. military.

Some of this sounds potentially sensible; ending U.S. efforts at nation building after two dramatic failures like Iraq and Afghanistan would seem to make sense. Some of it is highly risky; a nuclear Japan, South Korea, or Saudi Arabia may make for less rather than more stability. Some of it just seems internally contradictory; if the United States is going to intervene less under a Trump presidency, it is not clear why the U.S. Army needs to grow by fifty thousand or the Navy to 350 ships.

One senses that the details are not important here, but the unpredictability of Trump’s judgment is. Moreover, because so many of his statements—nukes, burden-sharing, ISIS—are off the cuff, his temperament is at the heart of what makes him a potentially dangerous president. Not only has he headed off the rails in his past (the “locker room” tape), but he has lashed out in every direction on this issue, as well as on Clinton’s mistakes (“go to jail”) and the fundamental nature of the U.S. electoral system (it is “rigged” against him). All are indicative of how he might handle even more explosive situations.

With equal intensity, he has lashed out systematically against Mexico and Mexicans, Muslims, women—the list seems endless. Temperament alone would make him a threat to U.S. national security. While nonintervention might be the language of his foreign-policy judgment, intemperate anger when challenged or confronted would likely lead him to the very military interventions he suggests he would avoid. Compare his assertion that the president should be “unpredictable” about using nuclear weapons to the inexperienced John F. Kennedy’s judicious policymaking during the Cuban missile crisis, and the point is made.

His substantive judgments would separate the United States from its allies, alienate friends and neighbors, result in direct and massive U.S. military intervention in the Middle East (his ISIS strategy, he said, “will require military warfare,” including military conflict with Iran), and link the United States to dictatorships such as Russia without serious consideration for the United States’ long-term national interest. And his temperament would exacerbate all these tendencies and inconsistencies.

If temperament is the metric, the argument for Secretary Clinton seems an obvious winner. She does not seem to fly off the handle, speak off the cuff or make idle threats. But in Clinton’s case, the problem is judgment. She is deeply rooted in the post–Cold War liberal interventionist tradition, a tradition that has seriously engaged the U.S. military around the world, brought few if any victories, cost a number of American lives and lots of treasure, and tied the United States to political developments and conflicts in every corner of the globe, risking further conflicts to come.

Her track record as a senator and secretary of state is telling when it comes to global engagement and the risks to U.S. national security. She is a strong advocate of American exceptionalism and of the United States as the “indispensable” nation, obliged to exercise global leadership constantly. As secretary of state, she was clearly more of a hawk about intervention and the use of U.S. military forces than the president, and may well have been the deciding influence on Obama with regard to the Libyan intervention, the aftermath of which is now a disaster.

In fact, Clinton is embedded in a long tradition of interventionist policies, stretching back decades. As one experienced Washington foreign-policy practitioner put it, “She believes, like presidents going back to the Reagan or Kennedy years, in the importance of the military — in solving terrorism, in asserting American influence.”

Her commitment to intervention, especially with force, is made clear by her policy judgments not simply on Libya but on the U.S. invasion of Iraq (voting in favor in the Senate), supporting the U.S. military surge in Afghanistan, urging the use of military force against Assad for his use of chemical weapons (a decision reversed by the president), and advocating more aggressive intervention in Syria early on, and the creation of a no-fly zone today (which would require larger U.S. military deployments in the region, even inside Syria).

Clinton’s campaign speeches and statements on foreign policy underline her assertive, interventionist, exceptionalist views. “With policies that keep us strong and safe, America will lead the world in the 21st century,” they read, calling for “creative and confident leadership that enables us to shape global events rather than be shaped by them.”

This language almost makes sense. It is familiar, unlike the Trump rhetoric. American foreign policy and the American people feed on this language. The pundits, analysts and researchers inside the Washington foreign-policy “blob” routinely churn out comments and papers supporting the exceptionalist, interventionist view of the world, though the content ranges from a more unilateral, militarized, neoconservative version to more “liberal internationalist” ones. There is a reason, after all, why a large number of neoconservative national security experts have endorsed Clinton over Trump: her experience and path to leadership, while more liberal, points in the same direction as theirs.