No, Iran is Not Sprinting Toward a Nuclear Bomb 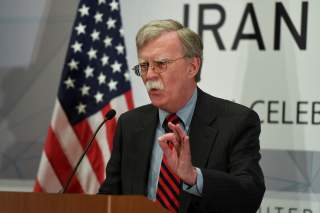 Iran’s breach of the nuclear accord was more message than threat. Iran is not sprinting for a bomb, nor does it want a war. But National Security Advisor John Bolton does. Iran’s recent actions have played right into Bolton’s hand, increasing the risk of war.

Iran recently breached a minor limit of the Joint Comprehensive Plan of Action nuclear deal, stockpiling low enriched uranium (LEU) beyond the permitted three-hundred-kilogram limit. This is a small, reversible step, and not a significant danger to the United States. Despite Bolton’s statements to the contrary, it does not indict that Iran is sprinting to a bomb—they are still a long way away. Instead, Iran’s main interest is to create leverage for sanctions relief.

Iran has done this before. Before the nuclear deal, Iran had over ten thousand kilograms of low-enriched uranium gas. They agreed to ship 98 percent of it out of the country, as part of the deal, and were left with a token amount of three hundred kilograms.

Iran’s decision to surpass this limit was a direct response to U.S. provocations. President Donald Trump violated the nuclear deal a year ago, reimposing all nuclear sanctions on Iran. Since then, Bolton and Trump’s other advisors have been steadily ramping up the pressure, hoping to provoke Iran and create a pretext for U.S. military strikes.

Most recently, the United States imposed sanctions on any country that accepts shipments of Iran’s excess uranium. Iran had been exporting any LEU in excess of the three-hundred-kilograms limit, as they’re permitted to do under the deal. Now, since the United States removed the export option, they are continuing to slowly produce LEU, but stockpiling it rather than shipping it out.

Iran is still far away from the 1,050 kilograms of LEU needed to make the core of one nuclear bomb. Tehran’s decision to exceed this stockpile limit is not a serious threat, but it is clearly a direct response to the U.S. imposition of sanctions.

This breach could be stopped either by Iran not making any more, or by Washington dropping those sanctions and letting the Iranians continue to export it out of the country. Better yet, the United States could agree to get fully back in the deal that was working well—it blocked all of Iran’s pathways to a bomb and placed the Iranian nuclear program under unprecedented international sanctions.

Remember, the United States violated the accord over a year ago. All the other parties—France, the United Kingdom, Russia, China, and the European Union—are still in it. Up until now, Iran has remained in full compliance, despite the massive sanctions imposed by the United States. Iran’s actions, specifically the breach of the LEU limit, are a direct response to U.S. provocations.

This is exactly what Bolton wants. Bolton and other Iran hawks are trying to goad Iran into a casus belli, creating an excuse for military action. Trump himself may not want a war, but Bolton does. Just two weeks ago, Bolton and Secretary of State Mike Pompeo convinced Trump to order airstrikes against Iran—Trump pulled back at the last minute, at the advice of Pentagon leaders, after hearing of the casualty count. A few days later, the administration announced harsh new sanctions against Iran. This is just a few weeks after the administration deployed more U.S. troops to the Middle East, in response to some vague, unnamed Iranian threat.

Bolton and other Iran war hawks are creating the conditions for war. Iran, regrettably, played into Bolton’s hands by breaching the nuclear accord. It’s one step, and a small one, but it could give hawks in the United States the pretext they’re looking for to start a war. Even more troubling, Iran has threatened to breach another limit of the nuclear accord by July 7: enriching its uranium beyond the low level permitted under the deal. This would be a more dangerous step, and it’s to be hoped the remaining parties to the agreement—the Europeans, Russians and Chinese—can convince Iran to refrain and come back into compliance with the accord.

But, again, Iran is not sprinting to a nuclear weapon. It’s taken one minor, reversible step. And the Trump administration initiated this cycle of escalation. It began with the complete and total violation of the nuclear accord, and Bolton has been pushing relentlessly for a military conflict ever since.

Congress is hardly known for restraining Trump, but Congress is so concerned about the risk of war that they are beginning to rein in the administration’s ability to launch military strikes against Iran. No authorization exists for military action against Iran, according to legal experts and many members of Congress. But administration officials have made the case—in at least one closed-door briefing with Congress, as well as in multiple hearings—that the 2001 law that authorized the war in Afghanistan could be used as legal grounds for war with Iran. President Trump himself has publicly asserted that he does not need congressional authorization for war.

war with Iran by prohibiting federal funds from being used for military strikes against Iran without explicit authorization from Congress. Next week, the House will vote on an amendment to the annual defense bill authored by Democratic Representatives Ro Khanna, Anthony Brown, and Republican Matt Gaetz. Last week, fifty U.S. Senators—including four Republicans—voted to approve similar language. While the Senate measure failed to reach the sixty vote threshold required to pass, it showed a bipartisan Senate majority supports preventing the administration from launching illegal military strikes against Iran. If the House amendment makes it into the final defense bill, then it would be a historic achievement—not only in preventing war with Iran, but in Congress beginning to reassert its constitutional responsibility over war and peace.

Trump and Iran may say that they do not want a war. But that in and of itself isn’t enough. Both sides are taking steps that make war more likely—and that’s exactly what Bolton wants.