No, Michelle Obama Isn't Running in 2020 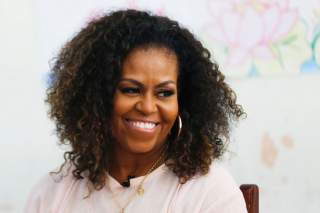 Following former Vice President Joe Biden’s blowout win in South Carolina, the odds of a contested convention, where no candidate has a majority of delegates going into July’s Democratic National Convention, has increased. FiveThirtyEight currently calculates the odds of this possibility at a two-thirds likelihood.

The inability of one of the current candidates to win a majority or fail to unite the Democratic Party going into November has increased speculation that a last-minute draft would take place. The name trotted out by fringe rightwing prognosticators, going back years, has been former First Lady Michelle Obama.

The most recent contested convention was in 1952, when the Democratic Party nominated Adlai Stevenson on the third ballot. The Illinois Governor had refused to be a candidate during the nominating process but acquiesced to a draft on the first day of the convention, stepping over Senators Estes Kefauver of Tennessee and Richard Russell of Georgia who had both failed to gather enough delegates during the primaries.

It is this sort of last-minute draft movement that inspires gossip and “what if” scenarios among political analysts. Numerous names are mentioned, ranging from unlikely to outlandish. Michelle Obama is possibly the most headline-grabbing suggestion.

Yesterday, when asked by Fox News host Maria Bartiromo about the probability of a Michelle draft, former White House Chief Strategist and co-founder of Breitbart News Steve Bannon didn’t rule it out. “I think if they go to the convention, and they’re desperate, and Bernie [Sanders] is way behind, seven, eight points behind Donald Trump, the Obamas and the Clintons will look for any alternative to defeat President Trump…This thing is still wild open.”

Bannon isn’t the first conservative provocateur to blow on the embers of a Michelle Obama candidacy. In the previous election cycle, when Democratic nominee Hillary Clinton was suffering from pneumonia and had a health crisis in public, Republican dirty trickster and now federal inmate Roger Stone propagated the idea that the Democratic Party would switch out the former secretary of state for the departing First Lady.

“It is my understanding that if she [Clinton] were to be incapacitated, or if she were too ill to continue, or if (God forbid) she should pass away, then the Democratic National Committee would hold a meeting to fill that vacancy,” Stone said in September 2016. “And I don’t think it would be Joe Biden. I don’t think it would be Tim Kaine. I’m fairly confident she would be replaced by Michelle Obama.”

Why does Michelle receive the attention?

Regularly ranked as one of the most admired women in America (if not the world), Michelle Obama has a star power magnetism that competes with her husband. Her memoir, Becoming, was the best-selling book of 2018 and sold over ten million copies. A plurality of Americans believe Barack Obama to be the greatest president of their lifetime, and many would presumably welcome a restoration of their family to the White House.

This Shermanesque denial, combined with the infeasibility of the Democratic Party nominating a former president’s wife who possesses no governing experience, makes the non-existence of a Michelle Obama presidential campaign as sure as things get in politics. But that won’t stop the hype emanating from personalities like Bannon and Stone, who like to encourage their own attention.