No, Mr. President, War Against Venezuela Is a Bad Idea 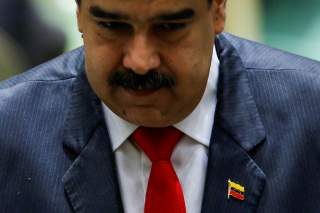 America’s UN Ambassador Nikki Haley, who routinely promotes the agendas of friendly dictatorships such as Saudi Arabia, recently stepped out as a defender of liberty to denounce repression in Venezuela. She evidently wants regime change, via means unstated. Furthermore, President Donald Trump supports military action. But intervention in Venezuela is a dumb idea.

The Maduro government is a disaster. Little pretense remains that the country is a democracy; the regime maintains power through brutality and violence.

At the same time, President Nicolas Maduro has proved to be an enemy of the poor. Social services, including health care, have collapsed. Getting enough to eat has become a major challenge in this oil-rich nation, with roughly 90 percent of the population now falling below the poverty line. Amazingly, the ruling regime has “turned natural resource wealth into a curse,” as noted my Cato Institute colleague Juan Carlos Hidalgo. Millions of Venezuelans have fled in despair.

The result is a widespread desire to free the nation from incompetent dictatorship. Haley joined demonstrators outside the UN and declared that “we are not just going to let the Maduro regime backed by Cuba hurt the Venezuelan people anymore.” How she planned to stop Caracas, however, she did not say.

But Haley sounds moderate compared to others. For instance, last year the president, who ran as an opponent of Hillary Clinton's continual war-making, proposed the “military option.” Faced with opposition within his administration and throughout Latin America, he publicly dropped the idea but apparently has not forgotten it. For instance, U.S. administration officials most recently encouraged a coup. Trump also observed that “It’s a regime that frankly could be toppled very quickly by the military, if the military decides to do that.”

The contention that Washington should wreak death and destruction for the money is frankly ridiculous, but the argument for humanitarian intervention is taken more seriously. Nevertheless, a war would be a great mistake.

First, Venezuela is not unique. Other brutal dictatorships have oppressed and killed their own people while creating economic misery. North Korea, Eritrea, Burma/Myanmar, Egypt, and Zimbabwe come to mind. Sometimes U.S. sanctions have compounded grotesque domestic misrule, as in Cuba, Sudan and Iran. China and Russia once were totalitarian and impoverished, among the worst governed nations on earth.

Absent some limiting standard for intervention, the U.S. military would stay quite busy. Yet young men and women join the armed services to defend their nation, not conduct crusades on behalf of ivory tower elites. Service members’ own society should have something fundamental at stake before the government risks their lives.

Second, war is unique, not just another policy tool. Military action usually kills and destroys. The consequences often are indiscriminate. No matter how humanitarian the intent, war is rarely humanitarian in impact. The outcomes usually are unpredictable, sometimes disastrously so. No government starts a fight expecting to lose. Indeed, politicians and peoples on both sides usually expect a quick victory or a “cakewalk” as it is called in recent parlance. Americans who marched off into the War of 1812, Civil War, and Iraq War II, and foreigners who began the Franco-Prussian War, World War I, World War II, and Korean War, had no idea what they were getting into. Very few conflicts turn out better than expected—Iraq War I is the very rare case.

Venezuela obviously would lose any fight, but Washington could not expect a bloodless victory. No doubt dedicated Chavistas, as they are known, would fight—even though Nicolas Maduro is a lackluster, charisma-challenged substitute for his predecessor, Hugo Chavez. Urban resistance could take some time to quell, especially if Venezuelan soldiers chose to disperse into guerrilla units. Resistance might turn into a civil war, multiplying casualties and creating long-enduring antagonisms which would undermine Venezuela’s future.

Deaths likely would be in the thousands, though no one knows how the conflict would evolve. Some critics of the current regime contend that fewer Venezuelan civilians would die from a U.S. invasion than under continued Chavista rule. This argument is speculative at best. After all, the regime is repressive, not engaged in mass murder. Moreover, different people would live and die. It is arrogant for American policymakers to make that decision for others. Who anointed the U.S. government to play god with other people’s lives—in the hundreds of thousands or millions, in the case of Iraq?

U.S. military action against Venezuela also would revive Latin American antagonism over “Yankee imperialism.” Worse, Chavistas might escape blame for their misrule by pointing to their ouster by Washington. The United States would own the results. Washington would face pressure to engage in nation-rebuilding; yet installing a new regime by force would undermine the new government’s legitimacy, as well as those which followed. And the underlying factors which gave rise to the Chavistas would remain.

Lastly, engaging in another war of choice, another conflict which no one could seriously argue was forced on America, would further deform national security policymaking. The temptation to use America’s overwhelming military power already is intense, with routinely ill consequences. The added precedent would benefit America’s foes which, as they grow more powerful, might find useful when dealing with recalcitrant neighbors. Washington would have no credibility to criticize others for following its practices.

Two centuries ago John Quincy Adams warned Americans not to go “abroad, in search of monsters to destroy.” America’s own soul was at risk, he explained. The United States “might become the dictatress of the world” and “be no longer the ruler of her own spirit.”

That is too high a price for America to pay. War has become an all-too-routine response by Washington. President Trump should keep the troops at home when dealing with Venezuela.

The Philippines vs. China in the South China Sea: A Legal Showdown