No, Russia Doesn't Require Buffer States for Its Own Security 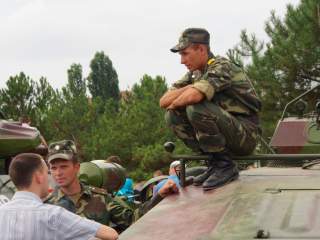 The recent resurgence in thinking about the role of geography in international politics has brought a welcome mix of sound analysis and discussion of geopolitics and causes of conflict. The return of geopolitics to discourse on modern conflict has proved quite helpful in analysis of current crises. However, along with this resurgence in thinking about the role geography can have in facilitating interstate competition, slippery analysis continues to confound many commentators. Too much focus on treating geography as a unique causal variable has led to misplaced focus on geography as causing conflict rather than as a facilitating factor in modern conflict.

A major example of this problematic analysis of geography and conflict can be seen in many recent discussions of Russian foreign policy. Recently, many analysts have consistently claimed that the real cause driving Russian foreign policy and Russian actions in Crimea and Eastern Ukraine has been geography. Specifically, they claim that Russia’s unfavorable geography necessitates Russia’s territorial grabs, as a means of creating buffer areas to defend their near abroad. Given the history of Napoleon, Imperial Germany, Nazi Germany and others’ quest to push into Russian territory, this argument seems to have face validity. Yet, in the modern era, assuming that geography mandates Russian power projection is a flawed assessment that gives less credence to Russian expansionist and power-grabbing ideology than it should.

This argument manifested itself most recently in The Atlantic, in a piece discussing Russian geography and the need for natural buffer states. The argument largely posited that due to the central European plains on Russia’s western border, land invasions would be relatively simple as the flat land is conducive to offensive maneuver. Hence, Russian geography mandates its need for buffer states to expand the amount of territory an invader would need to advance to capture the Russian heartland. This is emblematic of many commentators, since the response from many has been to see recent Russian actions begun in Ukraine as a natural outgrowth of security concerns based on geography. However, this view of Russian geography mandating Russian pursuit of buffer states is archaic and fundamentally wrong.

The belief that Russian geography requires Russia to pursue buffer states, due to Russian security concerns, is outdated and based on a lack of understanding of how the nuclear revolution changed the calculus of security for major powers. The nuclear revolution allowed states to no longer worry about the mobilization schedule of a prospective invader, and instead focus on ensuring a credible second-strike capability to make any invasion into the homeland as painful as possible. Defending the homeland did not depend on the amount of territory the invading army had to traverse following 1945, but rather on the ability to deliver a retaliatory strike.

First, why did Russia require buffer states in the past? The logic behind Russia pursuing buffer states claimed that when great powers were concerned with possible invasion, they would seek to gain territory on their frontier to delay the possible advance of a rival army and allow for a strategy of defense-in-depth. The increased amount of time it would take for an invading military to march across the buffer state would make invasion less likely to succeed, due to the increased defensive capability of the state being invaded. Buffer states were required to ensure the security of great powers with permeable geographical frontiers. Given the ease with which a prospective invader could advance on Russia’s western frontier, buffer states to increase the time Russia would have to deploy defensive forces were seen as a positive.

Once nuclear weapons were invented, however, buffer states were no longer seen as necessary regardless of geography, as nuclear deterrence worked to ensure the territorial integrity of great powers with nuclear capabilities. Buffer states are not required, since the defensive capabilities of second-strike nuclear capabilities are not enhanced or changed in any way by having early warning and delay of invasion. Thus, the utility of buffer states and the concerns of geography invariably changed following the nuclear revolution. Without the concern of quick invasions into the homeland of a rival great power, buffer states lose their utility regardless of the geography of the territory.

Russian and Soviet history since 1945 helps illustrate this point. Since the nuclear revolution, no threat to the territorial integrity of the Russian homeland has emerged, and Russia’s territorial integrity has been guaranteed by its military capabilities. During the Cold War period, the Russian military remained robust to defend its interests in eastern Europe and the Caucasus, and defend the inter-German border. There were real conventional threats to these territories, and to Russia’s ability to defend its interests there. But at no point did a viable land-based invasion threat to the Russian homeland ever appear, emphasizing the need for buffer states, as the nuclear deterrent was sufficient to defend any invasion threat. With the fall of the Soviet Union, the former Soviet republics became independent states, but no threat to the Russian homeland emerged. In fact, the relatively peaceful dissolution of the Soviet Union gives further evidence that the Russians were secure without buffer states as they relied upon their nuclear deterrent.

Today, with a robust nuclear deterrent, the lack of mountains on the Russian eastern flank does not pose a security threat to the Russian state. No serious land-based invasion threats exist, as any attempt to assault the Russian homeland would be tantamount to suicide. Indeed, the great powers in Russia’s European near abroad have no aspirations for invasion towards Moscow, with the U.S., Germany and NATO glad to expand their influence towards Russia’s borders but not invade Russian territory. This is not to say that there are no threats to Russia, as domestic unrest, radicalization in the near abroad and long-range missiles continually worry Russian security officials. But instead, threats based on Russian geography are not the main concerns for Russian security interests.

Placing the Politics In Geopolitics:

Moving beyond the narrow focus of geographical preconditions and the need for buffer states, the entire debate on geography and Russian foreign policy is fundamentally misstated in popular punditry. Besides the fact that geography as a constant cannot explain variation in state behavior, the debate over Russian actions today focuses heavily on the supposed “natural area” that Russia should occupy, without realizing the absurdity of claiming any territory as “naturally” belonging to Russia or any other state.

The idea that some standard of geography leads to natural areas of domination by a nation is fundamentally misstated. What we see as a natural sphere, such as U.S. dominance in the Western Hemisphere, is anything but natural. Instead the preponderance of the U.S. in the Caribbean was built on power and territorial expansion, not natural geography. There is nothing about Eastern Europe, Ukraine, the Baltics or the Caucasus that mandates they must be Russian spheres. Nothing about Western Europe mandates it must be a U.S. sphere. Power and competition lead to this outcome, and Russia is seeking to reclaim some of the power it has lost in the past two decades, but this isn't a natural allocation of power.

Similar to my argument that natural borders do not exist, natural spheres of influence are not present in the world either. Rather, the pursuit of power and national interests leads to competition for various territories—to expand spheres of control. Geography plays a role in facilitating the control of certain areas and mandating which areas will be contested for strategic reasons, but that doesn’t compel territories to exist under the tutelage of another state due to geography. The history of different areas becoming strategic due to the expansion of interests and consolidation of power is important to remember, as it makes the geography of certain areas more and less important as interests in different territories waxes and wanes. Keeping the focus on how geography, interests and power interact together to create political ambitions and actions is important for understanding international political behavior.

Too much analysis today fails to think critically about what geopolitics implies and what role geography can play in systematically understanding Russian goals and actions. Claiming that Russian actions today are mandated by geography fails to grasp changes in the strategic landscape since 1945, and the role power and ambition play in facilitating actions that geography can make easier. Focusing on how political interests interact with geography is important when thinking about geopolitics. Narrowly defining national interests to geography, and mandating that geography pushes states to replicate past actions throughout history, only fosters inaccurate thinking and forgives Russian land-grabs as natural. Instead, a focus on how Russian interests and pursuits for power have led to today’s status quo in Ukraine is needed. Only then will our discourse on geopolitics reach a satisfying flavor.