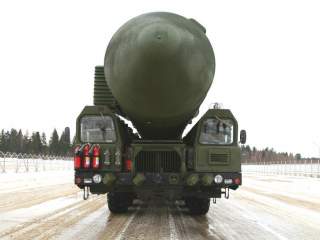 Somehow, the notion that Russia has lowered its nuclear threshold has become a truism in recent years. Analysts and officials alike repeat the conventional wisdom that Russia’s doctrine is one of “escalate to de-escalate.” They reference Russian development of small-scale nuclear weapons, or nuclear “scalpels,” and Russian modernization more generally as evidence of the danger Russia poses. These arguments are used often, if not always, to indicate that the United States and its NATO allies should also consider lowering their nuclear threshold and/or developing new, smaller, more usable nuclear systems.

Having spent the last two decades studying the Russian armed forces, including Russia’s nuclear capabilities, I have been surprised by these statements. They do not track with what I know of Russian nuclear strategy, nor with how Russians talk about it, for the most part. De-escalation strategies were all the rage in Russia in the late 1990s, but they’d largely gone away in recent years. So why do so many of my colleagues in the U.S. believe in them? I decided to figure out what was actually going on.

With some help from Brina Malachowski, I traced the sources of these arguments and also sought to unpack what we do and do not know about Russian nuclear intentions. I wrote this up in a short report, available on the CSIS website. My conclusion is that the evidence for either “escalate to de-escalate” or micro-nukes is weak. Russia is certainly keen to remind the world (and especially the United States) that it is a nuclear power, and some of its politicians and pundits do this rather crudely at times, and intentionally so, but there is little evidence that Russia does not take nuclear weapons seriously, or that its threshold for nuclear use has truly been lowered. And if Russia is more eager to remind us all that it is a nuclear power, this stems not from its strength, but from its weakness, and specifically from its fear of U.S. and NATO conventional superiority. All of this argues not for lowering Western thresholds, which would suggest that the West doesn’t share Russia’s faith in its capabilities, but for playing to U.S. and NATO strengths.

What is an “escalate to de-escalate” strategy? In the late 1990s, Russian analysts wrote about the small-scale use of nuclear weapons to demonstrate credibility and resolve in conflict and thus convince an adversary to stand down. This is neither an inherently nefarious or a new idea. It echoes Herman Kahn’s writing on nuclear deterrence, to say nothing of some past U.S. doctrines. From Russia’s perspective, it was a strategy of conventional weakness. Russian planners worried then, as they worry now, that a conventional conflict could escalate to nuclear use. They sought something lower down on the escalation ladder to show resolve, and, lacking conventional capacity, posited that smaller-scale nuclear use might just do the trick. This approach was tested in the 1999 Zapad military exercise, notably with a strategic bomber in a tactical role. It went no further. Reportedly, then President Boris Yeltsin left the exercise indicating that its scenario was implausible, that Russia would not use nuclear weapons in this way. Shortly afterward, Russia, now under a new president, Vladimir Putin, took steps to start rebuilding its conventional capabilities.

Russia’s conventional rebuilding moved in fits and starts, until Moscow’s dissatisfaction with its performance in the Georgia war finally provided some real impetus for reform. And in the meantime, Russia tended to point to its nuclear capability as, at the least, a sign of its status and global importance, just as it had for years. More recently, in early 2010, there was talk that Russia would, indeed, drop its threshold for nuclear weapon use, and possibly allow for “preemption.” A new military doctrine was due, and officials hinted that it would include provisions for “preventive” nuclear strikes and deterring conventional attack. But when the doctrine was issued, the threshold actually went up, not down. Russia’s doctrine then, and now, as this language was reaffirmed in 2014, allows for nuclear weapon use “in response to the use of nuclear and other types of weapons of mass destruction against it and/or its allies, as well as in the event of aggression against the Russian Federation with the use of conventional weapons when the very existence of the state is in jeopardy.”

Doctrine may not always define what countries actually do. But it seems relevant that a higher threshold was put in place in 2010, when debates suggested a lower one might come, and remained in place in 2014, when Russia revised its doctrine in response to a worsening relationship with the United States and its NATO allies. This is not to say that de-escalation is entirely out of the picture for Russia. In fact, it has its proponents. But the fact that Russian analysts and even the occasional official advocate for it publicly indicates to me that it is not, in fact, current policy.

Official Russian doctrine, not “de-escalation,” also tracks best with the exercises that Russia carries out that involve its nuclear weapons. Almost all involve strategic, not tactical systems, and not strategic systems in a tactical role. They seem designed to test readiness and command and control, to maintain the capacity to deter a strategic attack. Two exceptions are particularly worth noting. Western sources report that Zapad 2009 involved a tactical nuclear strike on Poland. Russian sources do not say this, but it is worth recalling that this exercise took place before the 2010 doctrine was issued—and right in the midst of the debate over dropping the threshold. More recently, a NATO report indicated that Russian forces staged a “mock nuclear attack” by medium-range bombers on Sweden in 2013. This is mysterious and worrying, but without knowing more about the exercise and the event, difficult to judge.

Russian nuclear modernization is also proffered as evidence that Russia is planning on using nuclear weapons. Russia continues to modernize its strategic force. So does the United States. This does not indicate a drop in threshold. Russia has also seized on Western concerns about the dual-capable nature of many of its newer systems, such as the Iskander missile, and started to play them up (indeed, many of Russia’s systems are dual-capable). But as of now, Russia’s nonstrategic nuclear munitions are, for the most part, stored far from delivery vehicles. In the meantime, these new systems, many of which have been in the works for decades and are only just now rolling off the assembly line, are being deployed in their conventional roles. And as for rumors of “nuclear scalpels,” those can be traced to some comments about possible future developments made at the turn of the century by former Russian Minister of Atomic Energy Viktor Mikhailov, who died in 2011. Russia, like the U.S. and China, is working on hypersonic weapons, and these may have a nuclear component. But little is known about the specifics of these systems, and their implications, as yet.

This is not to say that I don’t worry about Russian nuclear weapons and posture. I do. I worry about three things. First of these is that Russian strategic posture continues to rely heavily on less survivable silo-based ICBMs. This, combined with its weakened early warning system, suggests to me a higher risk that Russia, which fears a surprise U.S. attack, might erroneously think one is coming and launch those systems, which it would otherwise lose. This is a terrifying proposition.

Second, I worry that while Russian officials and military personnel almost certainly take nuclear weapons seriously, they are also taking advantage of Western concerns about dual-use capabilities to keep their potential adversaries (that is, the United States and its allies) off-balance and uncertain. This limits transparency and awareness and increases the risk of miscalculation. Finally, and relatedly, I worry that Russia’s continuing emphasis on its nuclear status, its saber-rattling rhetoric and its general brinkmanship could contribute to a crisis, particularly if Western countries respond in kind.

These concerns will be heightened, not alleviated, by Western policies that emphasize nuclear weapons. One thing that is clear from Russian behavior is that Moscow pays attention to what upsets the United States, and works to play on it. If the United States wants less Russian nuclear recklessness, at least one part of the equation is not rising to the bait. Another is recalling that Russia itself is worried about NATO conventional superiority. NATO and the United States should ensure that they, too, remain confident in that superiority—and that the Russians know it.

Olga Oliker is Director of the Russia and Eurasia Program and a Senior Adviser at the Center for Strategic and International Studies.