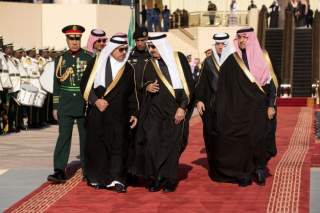 “I’ll see you next week.” According to a senior U.S. official, that’s what Saudi Arabia’s King Salman said to Secretary of State Kerry last Thursday when Kerry visited him in Riyadh. The following day, the Saudi foreign minister apparently confirmed to Kerry that the king would indeed be coming to Washington and Maryland this week, leading the White House to announce his intention to attend. So when King Salman’s government announced on Sunday that he would, in fact, be staying home, many accurately read the news as a rebuke of U.S. diplomacy.

Make no mistake; the king’s decision should be read as a snub. Akin to the late King Abdullah’s decision to forgo Saudi Arabia’s speech at the UN General Assembly in 2013, as well as a seat on the Security Council, this is a public display of dissatisfaction. Despite claims to the contrary by both the American and Saudi governments, a Western diplomat serving in the region told Reuters, “Of course it is a snub.”

Riyadh’s concerns over U.S. policy in the region need little explanation. It is remarkably difficult to convince Sunni Gulf rulers that Iran has peaceful nuclear intentions when its Islamic Revolutionary Guard Corps continues to wreak havoc throughout the region. The Saudis also have good reason to fear that the tens of billions in sanctions relief that Iran would reap under a nuclear agreement would intensify its support to extremist proxies in places like Syria, Yemen and Iraq.

While this explains why the five Sunni-ruled members of the Gulf Cooperation Council (GCC) will push back against this expected windfall for Iran, it does not explain why Saudi officials would have conveyed the king’s intention to participate in the summit only to walk it back in a matter of days.

The Saudi foreign minister claims King Salman had to stay home to supervise a humanitarian ceasefire in Yemen, where Saudi Arabia is leading a military coalition against Iran-backed Houthi militants. Yet by that logic, Saudi Arabia’s two top decision makers for managing the war, Crown Prince Mohammed bin Nayef (also the Saudi interior minister) and Deputy Crown Prince Mohammed bin Salman (also the Saudi defense minister), should similarly be staying home. They are both taking the trek to Camp David.

The veteran Saudi reporter who broke the story King Salman would be staying home, Jamal Khashoggi, claimed that Salman would remain behind to ensure a more productive summit, since his heirs tend to play more of a hands-on role when it comes to hammering out precise contours of Saudi policy. While the latter may be true, it is hard to explain why his government would have initially told Washington several times that he would be attending.

And it’s not just the Saudis. The decision of Bahrain’s ruler King Hamad to stay home, also announced on Sunday, reflects substantive disagreements between Washington and other Gulf states. Unlike King Salman or the two other rulers who are slated not to attend—Abu Dhabi’s ruler Khalifa bin Zayed Al Nahyan and Oman’s Sultan Qaboos bin Said Al Said—King Hamad is generally considered to be in relatively good health.

Something must have gone sour in the course of behind-the-scenes negotiations, pushing the two kings not to attend.

The top Emirati diplomat in Washington, Ambassador Yousef Al Otaiba, indicated last week that his government sought “something in writing,” a new U.S. “security guarantee” to replace what he characterized as America’s nonbinding, historical “gentlemen’s agreement” with the Gulf. The New York Times reported that the six GCC foreign ministers whom Kerry met in Paris on Friday “had pressed for a defense treaty with the United States pledging to defend them if they came under external attack.”

Administration officials have made clear that any security guarantees offered at the summit will not amount to the level of a treaty with force of law. Speaking from Washington on Monday, Saudi Arabia’s foreign minister revealed that such a pact was now out of reach. He downplayed the idea, insisting “Our faith in America’s word is total.”

On weapons, the Gulf states are also due for disappointment. The UAE in particular, a voracious purchaser of top-shelf U.S. military technology, expressed strong interest in receiving access to America’s most-advanced jet fighter, the F-35 joint-strike fighter. Saudi Arabia, the world’s number-one importer of defense hardware and Qatar are also believed to be seeking the F-35.

Yet U.S. officials have indicated that this is not going to happen, presumably out of concern that providing Gulf states with access to the F-35 could undermine Israel’s qualitative military edge. Several of the Gulf states, including presumably Saudi Arabia and UAE, were instead offered the status of major non-NATO allies—an honorific that carries with it several technical perks for receiving military technology transfers—but apparently their response was “very, very tepid.”

It would not be surprising if the Gulf states emerge from President Obama’s woodsy Maryland retreat with other commitments for weapons sales, however. The very principle of arming U.S. allies fits with President Obama’s general vision of deputizing regional states to fight their own battles. Gulf sales also make good domestic sense by providing work to arms manufacturers and keeping with the president’s pledge since 2010 to try and double American exports.

Kuwait is expected to announce a multibillion-dollar purchase of American F/A-18 fighter jets after the conference. Qatar has also been in the market for American jets, although it is unclear whether Doha’s agreement signed last week to purchase twenty-four French fighter jets addresses that demand.

Washington is eager to help the Gulf states with advanced technical support to create an integrated air defense system and reportedly was considering also providing 5,000-pound GBU-28 bunker buster bombs that so far have only been shared with Israel. The United States can be expected to further resupply munitions to GCC members for military strikes in Syria and Yemen. It will also seek to devise weapons packages short of the F-35 to help offset the sophisticated S-300 surface-to-air missiles Russia is supplying to Iran, which could be used to threaten aircraft inside segments of GCC airspace.

Yet without committing to new steps to offset the financial windfall offered to Iran by sanctions relief, there is little Washington can offer the Saudis to give up their most important—and most worrisome—trump card: the threat to go nuclear to match Tehran. Saudi elites close to the government have been dropping none-too-subtle hints that they view the Iran framework agreement as the starting gun in a race to become threshold nuclear powers.

The holdouts at Camp David may seem like only a diplomatic issue. But they portend an arms race in the Gulf: not just the conventional buildup already in the works, but a more unconventional one as well.