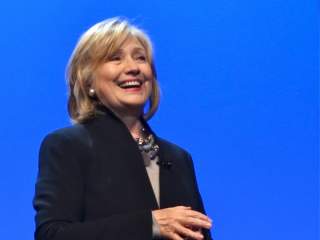 If the numbers alone of debate watchers determined the presidential race, then the Republican party would win in a landslide. Over eighteen million people watched the last Republican debates. The GOP debates have something for everyone. The Democrats? Not so much. More people apparently went to see the new Star Wars movie this weekend than tuned into Saturday night’s snoozefest on ABC News.

But for Hillary Clinton the inattention amounts to lack of controversy, which is exactly what she wants. In this primary she has become the Sue Richards of the debates—present but not really visible. Benghazi, emails and the like have disappeared as issues, even as the Republicans engage in a prolonged food fight with Donald J. Trump calling Jeb Bush as “dumb as a rock” and Bush dubbing him a “jerk.” At the same time, Ohio Governor John Kasich is running a lurid fifty-second digital ad called “Make Tyranny Great Again” that says Trump’s vice-president is Russian President Vladimir Putin and that they form a “dictatorial duo.” Kasich also tweeted, “Putin is a thug & a bully. Candidates should know it & say it. Our next President needs to stand up to him, not befriend him.” But there is no sign, at least so far, that these types of attacks are politically effective. The insults are good fodder for the media but they also help to shield Clinton from scrutiny.

Not that Clinton needs all that much help. The biggest source of controversy among the Democrats was that the campaign of Bernie Sanders went sniffing about data voter information collected by the Clinton campaign. The Democratic National Committee threatened to bar the Sanders access to any information, a move that prompted howls of indignation among progressive Democrats convinced that the nefarious Clintons are determined to exploit any opportunity to stymie Sanders and that the Democratic establishment is only eager to assist in this endeavor. So the Democrats have their own mini-battle against the establishment, but it doesn’t seem likely to amount to much.

Apart from Sanders, the best that they are able to muster is former Governor of Maryland Martin O’Malley who tried to emphasize his relative youth during the debate—“May I offer a different generation's perspective on this?" Actually, you may not, as he was greeted by a chorus of boos by the audience. It’s kind of amazing that the Democrats, who place such emphasis on identity politics, were unable to muster no minorities on the stage Saturday night. Instead, an aging white man (74) and woman (68), plus a baby boomer (52) represented the party.

There was also a good deal of uniformity in their stands. They had the National Rifle Association in their sights. They differed mildly on national security. O’Malley explained, “the president had us on the right course, but it’s a lack of battle tempo.” Clinton, as is her wont, struck the toughest line, calling for a no-fly zone. Meanwhile, Sanders, sounding like President Obama talking about his neocon Republican detractors, indicated that he is concerned that the “secretary is too into regime change and a little too aggressive without knowing what the consequences may be.”

For her part, Clinton largely ignored her Democratic challengers and shrewdly focused on attacking the GOP. According to CNN, she fibbed in stating that Trump “is becoming ISIS's best recruiter. They are going to people showing videos of Donald Trump insulting Islam and Muslims in order to recruit more radical jihadists."

But expect a continued barrage of attacks on Trump by the Democrats, though the same thing seems to be going on inside the GOP itself. There is no point in Clinton wasting any firepower on the negligible opponents she currently faces for the nomination.

So, for Clinton the debate could not have proceeded more swimmingly. She essentially faces no real primary competition, apart from the occasional pinprick strikes launched by Sanders and O’Malley, both of whom are flaming out before a single vote has even been cast. She can continue to polish her hawkish foreign policy bona fides before the general election to help insulate herself from future GOP attacks and amass a war chest.