No Surprise: The Bomb Has Made a Bad Situation Worse in South Asia 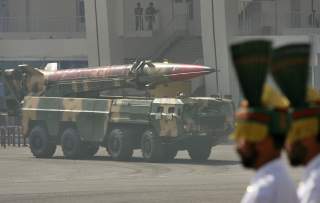 Twenty years after testing nuclear devices, the Bomb provided little relief for Pakistan’s sense of unease. Succeeding in—or at least keeping pace with India in a nuclear competition—doesn’t help the state least able to afford it. Accepting a modus vivendi with India could help greatly, but this would require far-reaching shifts in civil-military relations that Pakistan’s military establishment resists—and has ample means to checkmate.

Pakistan and India have come a long way since their confident predictions of limited nuclear deterrence and avoiding an arms competition. They are widely believed to possess three-digit-sized nuclear arsenals, with further increases ahead. India leads in some aspects of the nuclear competition, while Pakistan appears to have a larger stockpile of weapons. Both countries have combined to flight-test twenty-eight types of nuclear-capable missiles since the 1998 tests.

These weapons are add-ons to deterrence, but not to security and stability. This distinction is critical, because security and stability require forms of reassurance that deterrence cannot provide. The Bomb helps with deterrence in two overriding cases—the prevention of nuclear exchanges and major conventional war. The Bomb doesn’t help in other cases, including limited conventional war and punishment by proxies. The optimistic estimates by top-tier strategic thinkers in India and Pakistan two decades ago have become distant, broken dreams.

Michael Krepon is cofounder of the Stimson Center and author of Better Safe Than Sorry: The Ironies of Living with the Bomb.

Image: Pakistan's nuclear-capable missile, Shaheen 1, is driven past with its mobile launcher during the National Day military parade in Islamabad March 23, 2008. President Pervez Musharraf assured full support to the incoming government on Sunday, a day after the party of slain former prime minister Benazir Bhutto nominated the country's next prime minister. REUTERS/Mian Khursheed