No, the Tax Bill Will Not Help Republicans 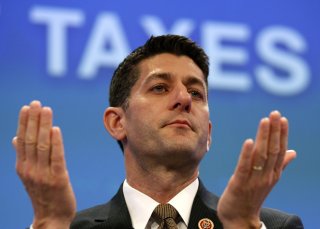 Last month, weeks before signing into law the most sweeping changes to corporate and individual tax rates in decades, President Trump promised the tax bill would help Republicans politically. “I think people see that and they’re seeing it more and more, and the more they learn about [the tax bill], the more popular it becomes,” he told reporters. It was a refrain Republican leaders repeated ad nauseum: once people feel the effects of the tax bill, they’ll love it! “When we get this done . . . that’s what’s going to produce the results,”  House Speaker Paul Ryan told reporters just before the bill passed. “And results are going to be what makes this popular,” he added. It was an argument many reporters bought, as evidenced by the Washington Post’s credulous headline, “The tax bill is likely to become more popular after passage. Here’s how Republicans plan to sell it.”

But [a month] after the bill was signed into the law the prediction has yet to come true. And it shows no signs of changing anytime soon—threatening Republicans’ fragile majorities in both the House and Senate in this year’s midterm elections. A poll released [last week] by Quinnipiac University finds the tax bill remains the most unpopular major law passed in recent memory. Just 32 percent of voters support the plan, compared to 52 percent who disapprove. Two-thirds (accurately) think the wealthy will benefit most from the plan, while just 22 percent think the middle class will benefit most. By comparison, 52 percent disapproved in November and 55 percent approved in December—when Republicans refused to seat Sen. Doug Jones before voting on the tax bill. A Gallup poll found similar results: just 33 percent support the tax plan, within the margin of error of its December tax survey.

Even the few polls that do show a slight uptick in support come with caveats. A recent New York Times headline pointed to an “upturn” in sentiment around the tax law. On closer inspection, the bill remains unpopular (only 46 percent approve)—and far more respondents strongly opposed the bill than strongly supported the bill. All of this comes despite a booming economy and the increasingly favorable views that some Americans have of the economy itself.

Now some Republicans in Congress have argued that despite the bill’s unpopularity, it will not affect them at the ballot box. “Tax cuts are generally unpopular,” Republican Sen. Thom Tillis told the Huffington Post, despite ample evidence to the contrary. In fact, we know from previous midterms that unpopular legislation is often linked to major turnout increases in midterm elections. Experts agree that the Affordable Care Act drove a record number of Republican to the polls in the 2010 midterms—and was linked directly to Democrats losing their majority. According to one study by political scientists Seth Masket and Steven Greene, the health care law alone cost thirteen Democrats their seats.

And there’s already evidence that the tax bill is not only unpopular in isolation, but is driving the historic unpopularity of Republicans in Congress. At the outset of the tax debate in early December, Democrats led Republicans on a generic Congressional ballot by 8 percentage points—45.5 percent to 37.2. By the end of the month, that lead opened up to 13 percentage points. The generic ballot is historically the best predictor of electoral success in congressional midterms.

The political picture becomes even more stark for Republicans when looking at their electoral map. As Trump’s former campaign advisor Stephen Moore admitted, the tax bill was designed to harm progressive states. “It’s death to Democrats,” Moore told Bloomberg. “The people who are going get the most whacked by this are wealthy and upper-middle class people who live in big cities,” Republican lobbyist John Feehery said, “In other words, Democrats.”

Indeed, the elimination of the state and local tax deduction (SALT) will raise taxes on millions in high tax states, jeopardizing thousands of teacher jobs. This would hit high-tax states like New Jersey, New York and California particularly hard—all states with a lot of at-risk Republican-held districts. Some House members from SALT states voted against the bill, putting them in the tricky position of running against their party’s signature achievement in 2018. Others, including many vulnerable California members thumbed their nose at their constituents by voting in favor of the tax bill when it passed the House of Representatives in late November.

In passing the tax bill, Republican leadership and the White House made a political gamble. They passed a bill over the objections of the American people that, in many cases, was designed to hurt their own constituents. Unfortunately for the Republicans, it is a gamble unlikely to pay off in November or beyond.

Jeremy Slevin is the director of poverty advocacy at the Poverty to Prosperity Program at American Progress Action Fund.

Image: U.S. Rep. Paul Ryan (R-WI) speaks during a session on "The Business of Taxes" at the Wall Street Journal's CEO Council meeting in Washington December 2, 2014. The candidate for vice president in Mitt Romney's 2012 White House bid, Ryan was confirmed by Republicans last month as chairman of the powerful Ways and Means Committee overseeing government funding and taxes from January when the new Congress takes office. REUTERS/Kevin Lamarque