No Time to Wait: Why Reconciliation in Ukraine Must (And Can) Happen Now 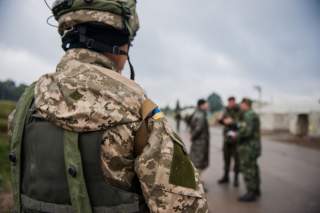 On a recent trip to Ukraine in May-June 2015, during the worst escalation of violence since the Minsk II agreement, I was glued to the TV, concerned about one thing: When would the fighting stop? Yet, at the same time, I had to wonder how any long-term reconciliation might work when the fighting actually did stop. Thus, while in Ukraine, I tried to get a sense of how people on both sides conceived of reconciliation, and its possibility.

My first encounter was a classic kitchen talk, over tea and pastries. As my brother, who currently lives in rebel-occupied territory, and my Kyiv friends argued over who had started the war and which side had killed more people, emotions flared, and it soon became clear that the two sides did not merely believe in different things—they operated with different facts. Finally, as she rose to leave, a Kyiv friend said, “The Donbas people brought this tragedy upon themselves and deserve their suffering.” Visibly hurt, my brother quietly surrendered the argument and offered to wrap some leftover pastry for her.

Little did I know at that time that it was going to be one of the more civilized conversations on my trip, as my next memorable exchange involved Ukraine’s regular army servicemen. I asked them to imagine that the Ukrainian army had defeated its enemy and quelled the separatist uprising. Could they see themselves working and living alongside people from Donbas when the war was over? After a long silence, two of them muttered that it would be really hard, as they could never trust people from Donbas again; a more vocal ukrop (slang for “Ukrainian patriot”) said that there could be no reconciliation with the Donbas “garbage. We have nothing in common with these beggars, loafers and crooks. We never have.”

Such kitchen talks, typically informal and seldom rigorous, are naturally vulnerable to bias and ad hominem attack; and the sentiment amongst Ukrainian soldiers is understandably hostile toward the separatist region. I expected to find more analytical and diplomatic conversation in professional settings. At a high-profile forum involving politicians and academics, I repeatedly heard variations of “we do not negotiate with terrorists”—the word “terrorists” being used to refer to all Donbas residents indiscriminately. In a less ceremonial setting, when I told one of my colleagues, a university professor from western Ukraine, that growing up in Donbas and speaking Russian made me no less Ukrainian than him, and that Ukraine needed to embrace her multiethnic and multilingual citizens, he quoted an old poem to suggest that, as in the past, only with “swords” could we “clean out the enemy”—the word “enemy” having suddenly appeared out of nowhere in the conversation.

These sentiments are consistent with the 2015 public-opinion poll conducted by the Kyiv International Institute of Sociology (KIIS), one of the most reputable private research companies in Ukraine. It showed that 92.6 percent of Ukrainians believe that the war does not merely usurp those involved in active military combat; the country as a whole is divided. Maybe it is too soon to start talking of reconciliation, then.

At the same time, despite obvious confrontation among Ukrainians in various parts of the country, they still relate to each other in fundamental ways and consider each other fellow citizens. Thus, only 12.7 percent of Ukrainians said, “we are too different to live in the same country” (among them 9.6 percent lost family members to war). Not surprisingly, the highest percentage of people who considered themselves “too different” was in Donetsk region (37.5 percent).

What these numbers suggest is that most Ukrainians do not disassociate themselves with their compatriots on the other side of the conflict, but they are still not ready for reconciliation.

Many Western scholars confirm Ukrainian people’s belief that reconciliation, even if possible, is inherently a postconflict process. For example, Matthew Rojansky, Director of the Kennan Institute at the Wilson Center and an acclaimed expert on the former Soviet Union, notes that reconciliation “will not impose a ceasefire on the current conflict, nor will it bring perfect harmony to Ukraine’s deeply divided domestic politics, nor can it resolve the major geopolitical disputes between Russia and Ukraine.” Until the fighting has ended and the truce holds, the reconciliation process is equally denied to both sides in the conflict.

Similarly, David Bloomfield, an editor of the United Nations’ 2003 Handbook Reconciliation after Violent Conflict, suggests that when we refer to reconciliation, what we typically have in mind is a postconflict situation: “war has ended, a settlement has been reached, and a new regime is struggling to construct a new society out of the ashes of the old.”

However, considering the Handbook’s own definition of reconciliation, as “a process through which a society moves from a divided past to a shared future,” much of the foundational work can and should be done while the war is still raging. In the case of Ukraine, the groundwork for reconciliation can, I believe, be laid in the following three ways: government assistance programs, empowerment of de-politicized organizations and mental-health services.

First, attention from and recognition by high-profile politicians can play an important part in victims’ embrace of reconciliation, and this recognition need not wait until the war is over. While Ukraine in general has enjoyed a fair share of compassion from the international community, the victims of war in eastern Ukraine should receive similar recognition, despite their proximity to the enemy. High-profile leaders should continually reinforce the message that preserving Donbas is not just about regaining control over a strategic buffer zone between Ukraine and Russia, but also about helping innocent civilians caught in the crossfire. And even if the contested territory is finally lost, the historical memory of those in the region will remain and impact belief and behavior as much as ever. Government assistance programs do not merely help alleviate hardship, but also enhance and empower such historical memory for good. Examples of such positive initiatives include the employment subsidy law signed by President Poroshenko in March 2015, authorizing state subsidies to companies employing refugees; and the Security Service of Ukraine order of June 16, allowing residents of rebel-occupied territories to flee war zones without a travel permit.

However meaningful government assistance can be, grassroots, nongovernmental entities are equally if not more important, as they engage citizens from different parts of Ukraine in collaborative work providing young leaders both a venue and a future reference frame for democratic governance, tolerance and reconciliation. The Journal of Ukraine’s Supreme Court reported that the number of NGOs in Ukraine has been rising steadily since the breakup of the Soviet Union—from 300 in 1991 to nearly 72,000 in 2015. Ukraine Crisis Media Center reported that over fifty volunteer organizations alone were specifically aimed at helping the Ukrainian Army.

While not all NGOs are free of a political agenda, the numerous de-politicized organizations need to be empowered and showcased, both inside and outside Ukraine, as their work creates a favorable environment for future reconciliation and cultivates leaders with constructive, even redemptive, vision. One such organization that I encountered in Ukraine is “Initsiativa E+” (Initiative Exists), which provides assistance to Ukraine’s front lines, hospitals and refugee camps. Many of its volunteers have been personally affected by the war and have strong political opinions, but the organization as a whole has made a conscious choice to rise above politics and make human rights its main agenda. My conversation with one of its courageous directors, Valentina Varava, reassured me that such leaders, who have personally experienced war and chosen to dedicate their lives to restoring peace and human values, are already laying an important foundation for reconciliation.

Finally, the most fundamental element for facilitating reconciliation, which can and should be implemented now, is psychological counseling and mental-health services. Numerous psychological studies have shown that widespread mental-health problems among both combatants and civilians may hinder successful postconflict reconciliation, as these mental disorders typically foster resentment and desire for revenge, and can lead to pathological anger. The war has affected a significant proportion of the country either directly or indirectly. According to the United Nations, the continued fighting in Ukraine has left over 6,000 people dead, more than 12,000 wounded, and close to 1 million internally displaced. It is estimated that Ukraine has some 130,000 active frontline personnel, and this number is expected to grow since the Ukrainian Parliament’s recent decision to increase the army from 184,000 to 250,000.

The rising proportion of civilians traumatized by the war is alarming. According to KIIS, in 2014, almost 62 percent of surveyed respondents in all regions of Ukraine (including rebel-occupied Donetsk region, but excluding Luhansk region) reported experiencing a particularly stressful situation in the last twelve months, up 10 percent from 2013. A phone survey, conducted by KIIS in conflict zones in Donetsk and Luhansk regions from October 2014 to March 2015, revealed that the three most frequently cited stressful situations of the past twelve months were shelling (80 percent), feeling helpless (57 percent), and losing the means for existence (47 percent).