No, Trump Should Not Be Given Increased Trade Authority 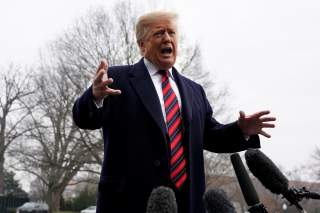 Not satisfied with the tariff-imposing powers he’s already flexed against imported steel and goods made in China, President Trump will reportedly ask Congress in his upcoming State of the Union message for sweeping new powers. As if on cue, Rep. Sean Duffy plans to introduce legislation likely early next week to grant them.

The White House wants reciprocal (or “mirror”) tariffs on imported goods where the foreign duty rate is significantly higher than the U.S. rate. Economists generally agree that Mr. Trump’s various trade skirmishes are damaging the American economy, and we have the data to determine how much this latest idea could cost us.

Trump has long objected to the fact that certain other nations charge higher import duties on specific products, such as cars and motorcycles, than America charges on the same types of products imported to the United States. Matching these higher foreign tariffs line for line may appeal to a superficial sense of fairness, but it would be an administrative and economic nightmare in practice. Worse, it could lead to the unraveling of a global trading system that has served America’s national interests for more than seventy years.

The president’s plan would lead to an exponential proliferation of new duty lines in the U.S. Harmonized Tariff Schedule. More and higher duties would inflict higher prices—and thus lower real wages—on American consumers and raise production costs on U.S. industries that depend on global supply chains. They would also provoke near certain retaliation against U.S. exports.

My upcoming Mercatus Center study finds that imposing mirror duties on imports from America’s top trading partners, among them the European Union, Japan, and China, would result in a nearly ten-fold increase in the number of individual duty rates above zero percent that are imposed by the United States—from 2,916 to 28,217.

These additional duty rates, if applied to 2017 levels of trade, would fall on $583 billion worth of imports, forcing Americans to pay an additional $43.3 billion in duties. The average trade-weighted duty rate imposed by the U.S. government against imports from those countries would more than double, from 2.1 to 5.4 percent, damaging the U.S. economy and inviting retaliation from America’s trading partners.

Far from achieving reciprocity, the average duty rate against U.S. major trading partners would actually exceed the 3.9 percent average rate that those same partners currently impose on U.S. exports to their domestic markets. Among the categories of imports that would be hit the hardest would be vehicles and parts, tires, footwear, wooden furniture, and certain foods such as cashew nuts from Vietnam.

Ultimately, a tit-for-tat approach to tariffs threatens to blow up the postwar trading system that prevents countries from discriminating against U.S. exports and keeps the general level of trade barriers low around the world. That system requires that tariffs be applied on an “unconditional most favored nation” (MFN) basis, which means that import duties must be applied in a uniform and nondiscriminatory manner. President Trump’s reciprocal tariff approach would invite retaliation, exposing U.S. exporters to higher and discriminatory tariffs, and undoing decades of multilateral negotiations to lower duties worldwide.

In large part because of those negotiations, tariff barriers among the major trading nations have declined from an average of about 22 percent on the eve of the initial General Agreement on Tariffs and Trade (GATT) in Geneva in 1947 to under 5 percent today, according to research by Douglas Irwin and Chad Bown for the National Bureau of Economic Research. The last three multilateral tariff agreements among GATT members—the Kennedy Round in 1967, the Tokyo Round in 1979, and the Uruguay Round in 1994—each resulted in trade-weighted tariff reductions of more than one-third.

Abandoning the principle of unconditional MFN and the successful global trading system based upon it would be a mistake of historical proportions. Such a policy error would almost certainly reverse the decades-long trend of declining trade barriers abroad, disturb the relative commercial peace that has prevailed in recent decades, and inflict needless economic pain on American producers and consumers.

Instead of pursuing the snake oil of mirror tariffs, the U.S. government should pursue the best interests of the American people. That means committing to non-discriminatory tariffs while negotiating with our trading partners to lower trade barriers abroad and, just as importantly, at home.

Daniel Griswold is a senior research fellow and co-director of the Trade and Immigration Project at the Mercatus Center at George Mason University. He is the author of the Mercatus study “The Danger of Imposing ‘Reciprocal’ Tariff Rates.”