Nobody Can Govern America from the Left: The Real Midterm-Elections Lesson 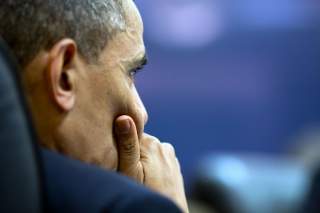 Much has been written, and more will be, about what the 2014 elections mean, and most of it will focus on the small stuff—whether it was a “wave” or not, whether it was an anti-incumbency or anti-Obama phenomenon, what the president does now, what happens to gridlock and so on. Place all that to the side for the moment, and let’s get to the big picture on what this election demonstrates.

It demonstrates that nobody can govern America from the left, because the country doesn’t want to go there, and because whenever it has been tried in recent decades, it has failed. While the elites of the media, academia and the managerial class can’t seem to absorb this fundamental reality, the American people know it.

This reality comes into focus with a review of the country’s history since the emergence of the Great Depression of 1929-1942. Franklin Roosevelt attacked the problem from the left, marshaling governmental power as never before and rolling over traditional views, going back to Thomas Jefferson and Andrew Jackson, about small government and strict construction of the Constitution. Many conservative thinkers—for example, in recent years, Amity Shlaes—have argued that FDR’s policies failed to address the persistent economic dislocation. But in political terms, Roosevelt was a great success. He spurred substantial economic growth year after year and demonstrated that, in times such as those, governing the country from the left was not only acceptable, but probably necessary. The country loved the guy.

But we should be mindful of what happened to Roosevelt’s New Deal—the greatest aggrandizement of governmental power in our history—after his 1936 landslide reelection and his ill-conceived effort to aggrandize his power further by “packing” the Supreme Court. The voters concluded that Roosevelt had gone far enough, and they placed a clamp on his presidency. Republicans picked up eighty House seats in 1938 and six Senate seats. There was no New Deal reversal, nor would there be one, because the American people liked the country’s new power alignments. But further significant governmental expansion now wasn’t in the cards.

That was the state of play in American politics through the Republican presidency of Dwight Eisenhower, who never sought to dismantle the New Deal, because he knew the voters wouldn’t stand for it. At the same time, he also knew the voters weren’t looking for any serious expansion.

But the country faced a huge agenda of unfinished business in the area of civil rights, and Lyndon Johnson leveraged the civic emotions of the Kennedy assassination to address that lingering necessity through the 1964 Civil Rights Act and the 1965 Voting Rights Act. In the process, he fostered a further expansion in the scope and reach of the federal government, then extended this expansion further with his Great Society initiatives to fight poverty, establish Medicare and Medicaid, and address housing, education and nutrition issues. Again, the American people generally accepted this expanded governmental role, over the loud objections of conservatives, but then resisted efforts to expand it further.

That has been the state of play in American politics ever since. The great fault line has been on the question of governmental aggrandizement. And, while there have been some initiatives along these lines over the years (creation of the Environmental Protection Agency, for example, and the Education and Energy departments), the country generally has resisted building upon the New Deal and Great Society in any serious way. That means little prospect for presidents to succeed while seeking to govern from the left.

Consider the history. Jimmy Carter tried to govern from the left—and failed. Bill Clinton tried it for his first two years—and had his head handed to him in the 1994 midterm elections, when the country gave both houses of Congress to the Republicans for the first time in more than forty years. At that point, Clinton brilliantly defaulted to a carefully calibrated governing philosophy designed to place him just to the left of center. It worked handsomely, and his presidency generally is considered to have been a success.

Then came Obama, whose grand aim was to achieve historical greatness by building upon the governmental structures created by Franklin Roosevelt and Lyndon Johnson. This was seen in his big economic stimulus program, his Affordable Care Act, his “cap and trade” energy initiative, his Dodd-Frank bill with its new Consumer Financial Protection Bureau and expansive bureaucratic meddling into markets, his plans to use the tax code for income redistribution, his expansion of the country’s regulatory apparatus and his exploitation of executive powers far beyond anything seen before in any president. His aim was to establish a new era of big government. As the New York Times’ David Brooks has written, “Capitalism is just a feeding trough that government can use to fuel its expansion.”

It didn’t work. It didn’t work in part because the American people never gave him a mandate for that kind of governmental expansion. This is reflected most starkly in the way his congressional allies pushed through Congress the Affordable Care Act—by distorting traditional procedures, without collecting a single vote from the opposition party. Neither Roosevelt, nor Johnson would have dreamed of embracing such a politically dangerous tack when they sought to take the country into new territory of governmental expansion. They knew such initiatives had to be undertaken with a broad national consensus or shouldn’t be undertaken at all. They mustered the requisite mandates before proceeding. Obama didn’t.

But, if Obama’s program didn’t work in political terms, it also didn’t work in structural terms. The stimulus program didn’t stimulate. Obamacare quickly went awry and has not worked as advertised. The president’s energy program—particularly his opposition to the Keystone XL Pipeline—is widely seen as stifling economic growth. His redistributionist plans can’t spur growth. His jobs performance is mediocre at best. His promiscuous use of executive authority is edging the country toward an unnecessary constitutional crisis.

The Obama presidency constitutes one of the great missed opportunities in American political history. He assumed office with an immense reservoir of goodwill at a time when the country was beset by an economic crisis that rendered voters highly receptive to bold action. The opposition party was in disarray as a result of its own failed presidency. Voters were ready for a new direction based upon a new matrix of political thinking that could foster new coalitions of citizens weary of the old fights and hungry for a new national coalescence.

No such national coalescence was possible by building upon the New Deal and Great Society foundations of old. They may have been right for their time, but they aren’t right for ours, as the American people have declared this week with emphatic bluntness. The folks over at MSNBC will never get it, but the next Democratic president should give it some serious thought.

In the meantime, while the country can’t be governed from the left, it has to be governed. And the challenge of new thinking and new coalitions applies to Republicans as much as it does to Democrats. The voters didn’t turn to the GOP this week because they have any particular faith in that party. They turned to the opposition because that’s what they do in our two-party system when they are grappling with a failed presidency.

And so the struggle will continue until one party or the other—or perhaps even a new party—will finally exploit the opportunity born of crisis to lead us out of the current mess.

Robert W. Merry is political editor of The National Interest and the author of books on American history and foreign policy.