Nobody Knows Who'll Be in Charge after Oman's 'Founding Father' 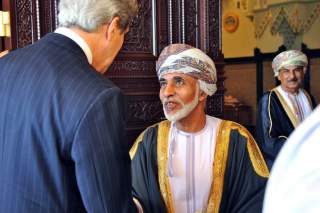 In the 1860s, while the United States was fighting a savage civil war, the Omani empire was reaching its zenith. At one point, Oman’s reach stretched from southern Persia, across the Persian Gulf and the Horn of Africa, to what is today much of Somalia, the Kenyan coast and south to Zanzibar. Muscat, controlled by the Portuguese in the seventeenth and early eighteenth centuries, had become a pivotal Indian Ocean capital.

Muscat’s writ runs far more shallowly today, but the sparsely populated country still punches above its weight in international affairs. Under the forty-six-year leadership of Qaboos bin Said Al Said, Oman has become a quiet diplomatic power throughout the region, lowering sectarian tensions and brokering discreet contacts among the United States and other regional actors. Omani diplomats, equally at ease in Washington and Tehran, were crucial to bringing together U.S. and Iranian negotiators as early as 2009, paving the way for the early first steps of the landmark nuclear energy deal between Iran’s Islamic Republic and the P5+1 governments inked earlier last year. Presumably with Iran’s encouragement, Oman also last year hosted peace talks between Saudi Arabia and the Houthi rebels who now control much of Yemen.

A Soft-Power Star on the Edge of Arabia

Omanis chiefly practice Ibadism, mostly distinct to Oman, Zanzibar and eastern Africa, which predates and is distinct from both Sunni and Shia Islam. In practice, Ibadis are relatively moderate Muslims, and Ibadism’s distance from both Sunni and Shiite has helped make Oman an important peacekeeper in the Muslim world. Oman is a close ally of Iran, but it was also a founding member of the Gulf Cooperation Council in 1981, even while it has aided American antiterrorism efforts in the region. In January, for instance, the United States transferred ten Guantánamo detainees to Oman. It has no real military might, nor does it project economic strength (its $58.5 billion economy is dwarfed today even by Syria’s), but its ability to project soft power in the region is off the charts. Moreover, together with Iran, it guarantees safe passage of Middle Eastern oil through the Strait of Hormuz, the narrow passage linking the Persian Gulf to the wider Arabian Sea.

Increasingly, the Middle East’s borders and institutions are grinding through a disruptive reorganization, Westphalian in scale and Hobbesian in brutality. It’s easy to overlook Oman, a country of just around 4.4 million (including nearly two million guest workers) that hooks around the southeastern corner of the Arabian Peninsula, and it’s even easier to take its stabilizing role for granted. It’s certainly at the top of no one’s Middle Eastern agenda, in the wake of Turkey’s recent failed coup attempt, Syria’s ongoing civil war, Iraq’s continuing division and the international effort to halt ISIS. Yemen has increasingly become an anarchic quagmire, a pawn in a regional cold war between Saudi Arabia’s Sunni kingdom and Iran’s Shiite republic.

The last thing anyone wants is a succession crisis in Oman—or a reversion to the chaos that marked Oman when Qaboos took power in 1970. Nevertheless, Oman’s status as a modernized, united and stable country in a neighborhood of tumult could be far more tenuous than it seems. Imagine, for example, if even a fraction of the chaos that dominates the Gulf of Aden in the failed states of Eritrea, Somalia and Yemen were visited upon Oman.

The sultan—seventy-five-year-old Qaboos—has no brothers, no wife, no sons and, by all accounts, hasn’t particularly groomed anyone as his successor. In the aftermath of a serious health scare over the last two years, it’s not clear that, despite the sultan’s flagging health, Oman is prepared to cope with the post-Qaboos era. Though the sultan returned to his country last March, he spent eight months of 2014 and early 2015 seeking treatment in Germany for what the world believes to have been cancer, though Qaboos and his royal advisers have been cagey about the real cause of his illness. No one today knows, reliably, the true state of Qaboos’s health.

Speculation swirls over the future of the allegedly ailing, seventy-nine-year-old Saudi monarch Salman. Americans thought that they were familiar with the man who would became the key player in a feeble Salman-led regime: the fifty-six-year-old interior minister Mohammed bin Nayef, the highly regarded crown prince and top U.S. ally, especially as regards counterterrorism matters. But there are reports that Mohammed is suffering from health problems after taking an uncharacteristically low profile under Salman. The thirty-year-old defense minister Mohammed bin Salman, the king’s son, and now second in line to the throne, is now ascendant, leaving American officials scrambling to curry favor.

Iran’s Assembly of Experts, newly elected in February with moderate gains for reformists, is responsible for determining who will succeed the seventy-seven-year-old Ali Khamenei as supreme leader. In Shiite-majority Bahrain, the only Gulf monarchy where primogeniture alone determines succession, the Sunni (and Saudi-allied) king, Hamad bin Isa Al Khalifa, is sixty-six years old. Kuwait’s emir, Sheik Sabah Al-Ahmad Al-Jaber Al-Sabah, is eighty-seven years old, and wings of the royal family have been feuding publicly for years about succession. Khalifa bin Zayed bin Sultan Al Nahyan, the president of the United Arab Emirates, is sixty-seven years old, and just the second ruler since the UAE’s formation. None of these will necessarily be easy transformations.

But in Oman, the transition will be even more difficult because of the nature of Qaboos’s rule. To understand modern Oman’s success is to understand that it was essentially the vision of just one man: Qaboos himself. Though the Al Said dynasty dates back to 1744, empowered for centuries through cooperation with the British, Qaboos’s father Said bin Taimur Al Said came to power in 1932 in an Oman that had become something of a backwater. Though Oman gained full independence from the British in 1951, Qaboos’s father was perfectly content to keep Oman a third-rate shell of a country. Omanis had different ideas, and nomadic and tribal southerners in Dhofar province launched a Marxist rebellion in 1965. With the country falling apart, Qaboos launched a coup against his own father in 1970, sending him off to England, where he died in exile two years later.

Within five years, Qaboos, in tandem with his powerful uncle, Sayyid Tariq bin Taimur Al Said, and British, Iranian and Jordanian forces, put down the Dhofar rebellion. But he wasted no time in beginning a campaign of modernizing Oman, above all by jump-starting the nascent oil industry—extraction began only in 1967. Oman, which is not an OPEC member, today pumps out 951,000 barrels of oil per day. That’s a far cry from Saudi Arabia (over 11.6 million), the United Arab Emirates (over 3.4 million), Iraq (over 3.3 million) or even Kuwait (over 2.7 million) or Qatar (over two million), but it’s enough to make it one of the world’s top two dozen producers.

Qaboos went even deeper in his efforts, remaking Oman as a completely modern society. He constructed sparkling new infrastructure across the country, reformed the education system and worked to provide a decent standard of living for all Omanis, many of whom were impoverished in 1970. GDP per capita in Oman at the beginning of Qaboos’s sultanate was just $354; by 2008, it had peaked at well above $23,000, roughly on parity with Saudi Arabia and Bahrain. Per Transparency International’s 2015 rankings, corruption in Oman was at a level similar to much of southern or eastern Europe, far better than in most of the Middle East. Qaboos has, in particular, paid special attention to the rights of women, who were encouraged to join the workforce in the 1970s, and won the right to participate in the country’s (limited) elections in 1997 and equal rights to own land in 2008.

Power is still quite heavily consolidated in Qaboos’s hands. The sultan serves as his own prime minister, defense minister, finance minister, foreign minister and chair of the Omani central bank, among other offices. Despite elections, most recently in 2015, for the eighty-four-member Majlis al-Shura, the Omani parliament remains a consultative assembly that advises the sultan on a noncompulsory basis. Though Qaboos is a mostly benign ruler—in a glowing Foreign Policy article in 2011, Robert Kaplan called him “Oman’s Renaissance Man”—who has without doubt transformed Oman into a genuine nation, there’s little public criticism of Qaboos or any real press freedom, and journalists can be arrested on spurious charges. The nearly 1.8 million guest workers in Oman are often subject to reported human-rights abuses, though the government is attempting to reduce their numbers in a bid to increase job opportunities for Omanis.

In short, for a country where the median age is just 24.9 (making Oman even “younger” than Egypt), modern Omanis know of no other Oman than a Qaboos-ruled Oman. All power runs through Qaboos, as has every element in the creation of modern Oman. As Kaplan wrote in 2011, “Qaboos is one of a kind in the Arab world. He is unmarried, lives alone, plays the organ and lute, and composes music.”