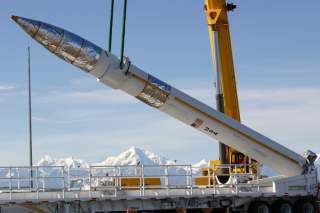 America’s discussion about missile defense tends to be a one-sided conversation. More often than not, it revolves around what capabilities the United States has fielded to date, and what it plans to provide to its allies overseas. But in the not-too-distant future, the United States might be able to count on a new voice in the missile-defense debate, as political and intellectual shifts progressively nudge Canada into alignment on the need to defend North America against ballistic-missile attack.

Much of this new proximity derives from a rapidly changing threat environment. Beyond the increasingly bellicose military posture of Vladimir Putin’s Russia and the growing strategic capabilities of China, the United States now confronts a mounting missile threat from rogue states such as North Korea and Iran. This is notable; while the nuclear threat posed by North Korea has preoccupied policy makers in Washington for years, Pyongyang was generally not believed to be capable of striking the United States for some time. Not so now. General Curtis Scaparrotti, the Commander of U.S Forces Korea, recently warned that “[North Korea has] the capability to have miniaturized a [nuclear] device at this point, and they have the technology to potentially actually deliver what they say they have.” Similarly, observers have cautioned that Iran—now embroiled in protracted nuclear negotiations with the West—continues to expand the range and sophistication of its strategic arsenal, something that current international diplomacy does not address.

Those concerns, it seems, are increasingly echoed in Canada. The government of Prime Minister Stephen Harper has also taken note of North Korea’s missile advances, and their potential implications for Canadian security. Major-General Christian Rousseau, the Commander of Canadian Forces Intelligence Command, recently noted that “North Korea has expressly indicated that it wants to be able to target North America”—and that the DPRK taking strides toward fielding a capability that would allow it to do just that. And like their counterparts in the United States, Canadian officials have expressed growing worries over Iran’s ballistic-missile arsenal—worries made more acute by the current, strained nature of relations between Ottawa and Tehran.

These common threat perceptions provide the basis for a new—and potentially significant—synergy on the issue of ballistic-missile defense.

This is because the U.S. missile shield is not complete. The United States currently fields thirty ground-based interceptors (GMDs) on the West Coast—twenty-six in Fort Greely, Alaska and four at Vandenberg Air Base in California. President Obama has authorized an additional fourteen ground-based interceptors to be deployed to Fort Greely to combat the threat from North Korea. But the east coast of the United States remains vulnerable to ballistic-missile attack from Iran, with an “east coast site” still largely in its planning phases in the Pentagon and on Capitol Hill. Given that the eastern seaboard of the United States contains the country’s highest population density and the majority of its financial centers, this represents a critical vulnerability.

Here, Canada can make a real contribution. The U.S. Congressional Budget Office puts the price tag for a third interceptor site in the United States at $3.5 billion over five years. In an era of budget cuts and fiscal austerity, a partnership between Washington and Ottawa on missile defense can contribute greatly to North American security while bringing down the steep costs of further deploying such a capability.

Ottawa appears to be thinking along the same lines. The Canadian government is reportedly scouting the area around Goose Bay, Newfoundland as a possible east-coast site. The news is significant, because X-Band radars located on Canada’s eastern seaboard would provide a strategic advantage to U.S. defenses, giving several minutes of additional advance warning in the event of a missile strike against the eastern seaboard.

Historically, the Canadian government hasn’t been prepared to take such a step. Although Ottawa long agreed in principle with the idea of ballistic-missile defense, it has yet to partner with either the United States or NATO on the issue in a meaningful way. Instead, Canadian policy makers have preferred to take a “wait-and-see” approach to missile-defense cooperation, knowing full well that—given ballistic-missile telemetry and the proximity of the two countries—Canada would be defended by default as American capabilities evolve. It goes without saying that this “free rider” mentality engendered more than a little resentment in Washington.

But Canadian attitudes could be changing. For example, a recent report by the Canadian Senate National Security Committee, headed by Senator Daniel Lang, highlighted the importance of implementing missile defense as part of Canada’s evolving security relationship with America. Canada, the report concludes, should enter into an agreement formalizing a missile-defense partnership with the United States.

That’s a message worth heeding. As the rapidly evolving capabilities of rogues like Iran and North Korea—and strategic adversaries such as Russia and China—make all too clear, the danger of ballistic-missile attack on the United States specifically, and on North America more broadly, is real, and it is growing. In their responses to this threat, Ottawa and Washington would do well to hang together, lest they end up hanging separately.

Ilan Berman is Vice President of the American Foreign Policy Council in Washington, DC. Megan Gularte is a researcher at the Council.