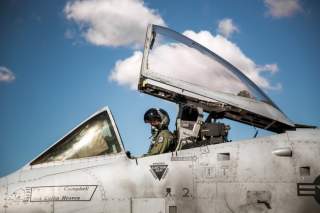 American strategists remain riveted by the unfolding drama in the South China Sea, wherein a U.S. Navy ship made a pass within 12 miles of a disputed reef “base” several weeks ago. One would not guess from media reports, but much bigger stakes are actually in play far to the north on the Korean Peninsula. That is where a combustible mix of ideological enmity, unrealized nationalist aspirations, the world’s deadliest weaponry, and the national interests of the great powers including China, Japan, Russia and the United States coexist on an all-too dangerous precipice.

Secretary of Defense Ashton Carter’s visit to the DMZ earlier this month reminds us of America’s enduring commitment to peace and security on the Korean Peninsula. Undoubtedly, the visit was also intended to demonstrate that senior U.S. leaders remain wholly committed to the “rebalancing to the Asia-Pacific,” despite a veritable witch’s brew of crises boiling from Yemen to Syria to Eastern Europe.  Lest we forget, the Korean Peninsula was key to the development of Washington’s so-called “pivot.”  After all, it is certainly not coincidental that extraordinary tensions between Pyongyang and Seoul during 2010, including the catastrophic sinking of the Republic of Korea (ROK) frigate Cheonan and the artillery shelling of a coastal island that entailed civilian fatalities, preceded the announcement of Washington’s rebalance to the Asia-Pacific by a little over one year.

Of course, a rather bizarre aspect of the Carter trip to the Peninsula was that a vital and unusual meeting was on-going at the very moment of his visit. In Seoul, ROK President Park Geun-hye was busy hosting a “trilateral summit” featuring both Japanese Prime Minister Shinzo Abe as well as Chinese Prime Minister Li Keqiang. Carter diplomatically opted not to “crash the party,” but his presence nearby may have purposefully or inadvertently conveyed a signal of Washington’s discomfort with high level East Asian diplomacy in which it is not a direct participant. Some other close observers of Korean affairs have argued recently on this forum that such regional gatherings could be rather useful for mitigating tensions in Northeast Asia. I strongly agree with that assessment and have argued previously that American diplomats should, for similar reasons, stay very well acquainted with the evolution of Beijing’s policies toward both Koreas. In that spirit, this edition of Dragon Eye will discuss a recent policy analysis by 杨希雨 [Yang Xiyu], a senior fellow at the China Institute for International Studies (CIIS), a think tank associated with the Foreign Ministry. Yang is a seasoned Chinese diplomat and served as a direct participant in the Six Party Talks process.

Yang maintains that Beijing has been consistent in its approach:  “In China’s view, the North Korean nuclear issue is not a simple matter of nuclear proliferation, but a strategic and comprehensive issue concerning the national security of North Korea.”  He contends that Washington’s position, by contrast, has been fickle, contributing to what he describes as the “危机周期的怪圈” [vicious circle of a crisis loop]. He notes that President Bill Clinton contemplated preemptive strikes against North Korea during the 1994 crisis, but then came around to embrace the Agreed Framework that involved negotiations on a wide range of issues, including for example the highly complex question of finding the remains of U.S. servicemen still missing from the Korean War. Unlike other Chinese commentaries, Yang’s analysis notably does not blame the Bush Administration’s Iraq War for pushing Pyongyang “over the edge” on developing nuclear weapons.  Rather, he suggests that the Bush Administration’s “anything but Clinton” mindset resulted in unreasonable demands, such as denying Pyongyang the right to develop nuclear power.  However, Yang notes that the Bush Administration also eventually softened its position, agreeing to remove North Korea from the U.S. list of state-sponsors of terrorism, for example.

Yang is quite critical of the Obama Administration’s approach of “strategic patience,” that has meant in practice that “the issue was given less priority in the U.S. foreign policy strategy.”  In particular, he takes exception with the current administration’s policy of refusing to have “direct official talks with North Korea.” Yang observes that Beijing has resisted Washington’s attempts to coax it into the “制裁俱乐部” [the sanctions club].  Moreover, he disparages Obama’s January 2015 televised prediction saying that the North Korean regime was likely to collapse. Nevertheless, he does affirm that “coordination and cooperation between China and the U.S. on the North Korean issue prevent it from spinning out of control.”

To remedy the situation, Yang suggests that China and the U.S. must transform the situation away from one that is characterized by “相互确保摧毁” [mutually assured destruction] and a “恐怖平衡” [balance of terror].  The hostile environment must be removed in his estimate, because “This is why North Korea insists on the development of nuclear weapons.”  He suggests, moreover, that the “严重失衡” [serious imbalance] that characterizes the North-South rivalry is only exaggerated, because the “U.S. stations large military forces there, indicating that the U.S. and North Korea are still at war.” He urges a normalization of relations between the relevant countries, as well as a cooperation mechanism for Northeast Asia that will accept North Korea as an equal member. To Yang’s estimate, the requisite diplomacy “不是简单 ‘弃核换补偿’” [is not a simple ‘exchange of surrendering nuclear weapons in return for compensation’].

U.S. policy toward the Korean Peninsula, whether pressing for tighter Japan-South Korea relations or fretting over Seoul’s position on the South China Sea, has rarely taken Chinese positions seriously. Yet, how can Washington seriously hope that Beijing could manage the problem if it is not willing to experiment with Chinese proposals?  Right-wingers flinching at any suggestion of putting some segment of U.S. forces in South Korea on the table for negotiations should recall that both Presidents Richard Nixon and George W. Bush made significant force reductions in South Korea to good effect. Another creative diplomatic approach that should be considered is whether China, possessing of ample nuclear expertise along with clear national interests at stake, might partially replace the International Atomic Energy Agency (IAEA) as exercising the primary role in overseeing first a freeze in North Korea’s nuclear arsenal and later full disarmament.

The recent Iran agreement demonstrates the importance of focus, determination, compromise and flexibility in high stakes diplomacy. Unfortunately, the Korean nuclear issue has witnessed a perverse luckless timing in which a flexible mood in Seoul coexisted with a hardline policy in Washington that was subsequently reversed. The results have been a poor mixing of “carrots” and “sticks” with a decided emphasis on the latter. A recent analysis on this site actually posits on thin evidence that Beijing is coming around to a policy of sticks as well. That line of reasoning runs quite counter to Yang’s logic outlined above, as well as the recent visit to Pyongyang by Chinese Politburo Central Committee member Liu Yunshan.

Rather than engaging in tiresome debates about “rocks and reefs” in the South China Sea, American diplomats would better serve U.S. interests if they turned their attention to mulling through creative approaches to Pyongyang that include ample carrots as well as sticks in concert with their Chinese counterparts. Chinese diplomat Yang asserts in the article discussed above that Beijing seeks negotiation toward a resolution of the nuclear question and a “permanent peace regime” based on the principle of “承诺对承诺，行动对行动” [commitment for commitment and action for action] and that should be welcome in Washington.  Meanwhile, the aspiration of a nuclear-free Korean Peninsula is rapidly slipping away while strategists on both sides of the Pacific puzzle over “low tide elevations.”