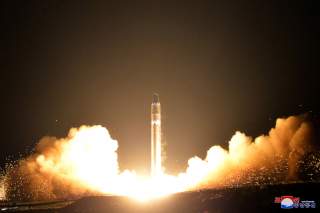 On November 29, North Korea broke its seventy-five day lull in missile tests to launch yet another intercontinental ballistic missile (ICBM). There had been some hope that the ten-week pause suggested that the North felt it had gone far enough and now might negotiate. Unfortunately not. And naturally, the North is giving us no indication of how much more they intend to test or what their end goal is. Will they continue the missile tests? Will they conduct an open-air test as they have threatened before? Another bout of Western paranoia is therefore likely this week, but President Donald Trump’s muted response—a notably nonhyperbolic ‘we’ll take care of it’—reveals just how bad our options are. Six months ago, Trump would have said something outrageous about obliterating the North, but even he has probably realized that we can’t actually do much.

Western media alarmism has already kicked in. Just a few hours after the launch, Marc Thiessen suggested imposing a no-fly zone (NFZ) over North Korea. Given that North Korea still has civilian air traffic, that is extremely risky. Presumably Thiessen would not recommend shooting down such traffic, but in any case, patrolling an NFZ would likely expose the United States to ground fire and the possibility American aircraft being shot down. The world would likely see the actions as a creeping escalation of force by the United States.

The missile itself is yet another step toward a fully functional ICBM. It flew 4,700km, well into the atmosphere. It was fired almost straight-up, in a ‘lofted’ shot. Fired at a forty-five-degree angle for maximum distance, it could travel up to 13,000km. This brings the U.S. east coast into range. The next question then is whether Pyongyang can marry a warhead to the missile frame—this seems likely—and guide it to a specific target (as opposed to just somewhere in the continental United States). The latter is harder and less likely at the moment.

So what do we do? Trump clearly wants to strike North Korea, and the rumor mill in South Korea is worse in this crisis than in the past. South Korean president Moon Jae-in strongly opposes the use of force, and Secretary of Defense James Mattis realizes just how risky a strike is. They appear to have convinced Trump to hold off.

The air-strike options remain just as bad as they have been for decades. Seoul, just 40km from the demilitarized zone, is exposed to massive North Korean punishment should Pyongyang choose to retaliate. China has a defensive alliance with the North and Beijing’s red lines are undisclosed. Beijing could join in perhaps, with frightening escalation possibilities. And of course, the North will use human shields in any case, meaning thousands of dead grandmothers and infants shown all over global television.

It remains disturbingly impressive just how rapidly North Korea has marched toward missile and nuclear maturity. It is nearly impossible to imagine this without Chinese forbearance and informal toleration. North Korea’s mobile launcher trucks come from China, so once again, there will be much focus this week on getting Beijing to help. Given that the North cannot sustain itself alone, it should be quite vulnerable to Chinese economic and financial pressure. Throughout its existence, it has been subsidized by outsiders; the autarky of its juche philosophy has failed since the regime’s inception. But China, the North’s primary external umbilical cord today, has refused to seriously use that leverage for nearly two decades. Trump is right to cajole and flatter Chinese president Xi Jinping on this. Unfortunately, it has not seemed to work. China remains maddeningly wedded to the North.

This leaves the usual options the United States and its allies have pursued for decades: firm alliances, to deter North Korea from actually using these weapons; sanctions, to make it is as hard as possible to build more of them; and missile defense to give us what ‘roof’ we can devise against them. If this sound depressingly familiar, it should. It is basically what Presidents Bush and Obama pursued as well.

None of these options are very appealing or exciting. Trump tried to break from his successor by declaring that the ‘era of strategic patience is over,’ but in practice has followed more or less the same ideas—holding the line as best we can until North Korea breaks. Deterrence and alliances have hemmed in North Korea for decades. We should continue to work with South Korea and Japan, and hammer away at China over just how dangerous the North has become. Sanctions should pursue North Korean money in Chinese banks. We know from previous experience in 2005 that North Korea is very sensitive to U.S. targeting of its overseas funds. And finally, missile defense, for its all problems and holes and gargantuan unit costs vis-à-vis missiles, does buy us some time.

But I do worry that all this will not be enough. North Korea does not seem to be pulling over. Pyongyang now likely has the basic needs for nuclear deterrence met, but it keeps building. We can slow that run with sanctions and guard against some of it with missile defense. But I fear North Korea may develop so many nuclear rockets—hundreds? thousands?—in the coming decades, that pressure to strike will become tremendous, especially in Congress and among conservatives in South Korea and the United States. As long as the North will not talk and continues to build and test relentlessly, this choice is racing towards us.