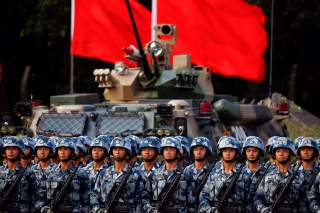 The citizens and government of Hawaii should send a big mock congratulatory lei to Chinese leader Xi Jinping. The sheer terror they experienced for the better part of an hour last Saturday morning ultimately came courtesy of China’s longstanding policy of enabling and protecting North Korea’s nuclear and ballistic missile programs.

Yes, the immediate cause of the panic was the local government’s erroneous flash warning that the Pacific paradise island was about to be hit by a nuclear missile. Given North Korea’s recent nuclear and missile tests and blatant threats against America, the alert seemed credible.

Why, then, sarcastically congratulate China for the stark fear the event engendered in 1.5 million Hawaiians and tourists and other Americans who remembered Pearl Harbor?

Because Xi and his colleagues and predecessors have colluded with three Kim regimes over four decades to develop a nuclear and missile capability intended precisely to threaten America’s allies, bases in Asia and the United States itself.

The scenes of terror witnessed on the streets of Honolulu—parents lowering children into sewer manholes for protection—reinforced what the two Communist regimes have already achieved at the highest levels of the U.S. Government: incessant preoccupation with North Korea’s nuclear threat, and, until now, impotence and lack of will to stop it.

What North Korea has sought to gain with nuclear weapons has long been clear: domestic legitimacy and international prestige; awesome military power available for both offensive and defensive purposes; formidable leverage in negotiations over security, economic, and diplomatic matters; and, most importantly, separation of South Korea from its American ally.

It has been insufficiently noticed that Beijing shares those same goals for North Korea and that they synergistically serve China’s own strategic aims.

For far too long, China has succeeded in portraying itself as merely a passive neighbor and reluctant supplier of food, fuel, and diplomatic cover for its rambunctious junior partner, and even as another victim of Pyongyang’s erratic behavior. All Beijing wants, it argues, is stability on a “denuclearized” Korean Peninsula, and a defensive “buffer” against potential aggression from South Korea, Japan and the United States.

The reality is quite different: keeping the Kim family dynasty in power, economically afloat, and technologically capable of progressing with its nuclear and missile programs has significantly advanced China’s strategic objectives toward the West.

It has distracted and diverted two generations of U.S. diplomats and policymakers from other tasks, including keeping an eye on China’s own aggressive regional and global agenda.

It has afforded Beijing enormous undeserved prestige as a responsible, restraining influence over North Korea’s reckless conduct. China’s leaders have skillfully leveraged that credibility to stay the West’s hand on myriad Chinese violations of international norms in trade and currency, freedom of navigation and overflight, proliferation and human rights.

North Korea has proved to be a wonderful two-edged sword for China to wield against the United States and its allies, with both edges cutting into Western interests—a true win-win for Pyongyang and Beijing. Historians may well marvel at how long it has taken for the West to catch on to, and call out, China’ insidious game.

U.S. intelligence knew, for example, that even as Washington was yielding to Beijing’s demands for a nuclear-free Korean Peninsula by withdrawing U.S. tactical nuclear weapons from South Korea in the early 1990s, Chinese nuclear plans and technology were being funneled to North Korea (as well as to Libya and Iran) through Pakistan’s A. Q. Khan network.

The pattern continued over the next two decades as Beijing always had Pyongyang’s back at the UN Security Council, ensuring that sanctions never bit too deeply, and in Six Party Talks where it staved off Western demands for serious denuclearization.

Donald Trump, as candidate, president-elect, and now as president has seen through this game and has repeatedly called out China for failing to use its unparalleled ability to stop and reverse North Korea’s nuclear program.

After putting Beijing on notice that he is on to its strategy, he then offered the softer approach, hosting Xi at Mar a Lago and lavishing praise on the Chinese leader as a strong partner in international affairs, along with chocolate cake and a few dozen well-targeted missiles at Syria (to enforce President Obama’s red line on chemical weapons use).

In addition, after some initial positive steps on other China-centric flash points—raising Taiwan’s international status, enforcing freedom of navigation in the South China Sea, correcting trade imbalances—the president stepped back to give Beijing some time and space to work the North Korea problem.

While China has moved further to press Pyongyang than it has during any other U.S. administration, it still stops short of the Draconian economic measures needed to change Kim’s calculus of advantages and disadvantages in pursuing nukes.

Now that presidential flattery and cajolery have failed to convince China of the urgency of the situation, Washington must change Beijing’s own cost-risk-benefit analysis, not only by seriously punishing complicit Chinese entities, but also by moving ahead more assertively on the other American imperatives—such as Taiwan and the South China Sea. Much remains to be done in both those areas.

The president must reject outright Beijing’s false pleading that it cannot get any tougher for fear of risking the possibility of regime change in Pyongyang. U.S. policymakers have repeatedly assured the two Communist governments that we can live and let live with that odious regime—but not when it is armed with nuclear-tipped missiles presenting an existential threat to Honolulu and other American cities.

As was said of German regimes before the two world wars, Pyongyang and Beijing demand absolute security at the cost of everyone else’s absolute insecurity. This is not a president who can accept that fatally flawed deal.