North Korea: Evil, But Not a Terrorist State 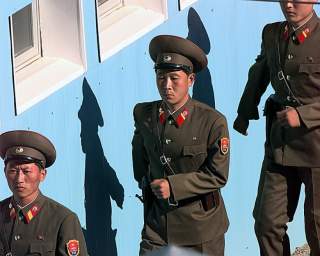 President Barack Obama plans to remove Cuba’s official designation as a terrorist state. Congressional hawks are grumbling, but they can’t stop him. The move is long overdue—and is a good argument against those who want to put North Korea back on the list.

The Democratic People’s Republic of Korea (DPRK) remains a most troublesome country. Delisted in 2008 by George W. Bush in an attempt to reach an agreement over nonproliferation, the DPRK has continued its policy of brinkmanship highlighted by occasional missile and nuclear tests. Ruled by the grandson of the North’s founder, North Korea has become the world’s first Communist monarchy. The country is also a human-rights horror.

President Barack Obama never believed there was much chance of changing Pyongyang’s behavior. The administration attempted to ignore first Kim Jong-il and now Kim Jong-un. The North made that difficult, staging missile and nuclear tests, sinking a South Korean naval vessel and bombarding a South Korean island, and arresting American visitors for various alleged crimes. Even then, Washington made little effort to pursue serious negotiations, especially after Kim fils shot off a rocket shortly after agreeing to freeze missile and nuclear development in the so-called Leap Day deal of 2012. The North is not alone at fault in the dreary history of U.S.-North Korean relations, but the administration’s pessimism is well justified.

Ideas for dealing with Pyongyang range from initiating diplomatic relations to tightening sanctions to enlisting China to “solve” the problem. None look particularly promising in changing the DPRK.

Gaining renewed attention is the idea of relisting Pyongyang as a “state sponsor of terrorism,” or SSOT. North Korean attacks on the South in 2010 led to calls to put the North back on the terrorism list. The campaign was revived by the hacking of Sony Pictures last fall, apparently by North Korea.

The administration eventually responded by tightening some sanctions, but did nothing substantial enough for the DPRK to notice. In practice, it is difficult to make the North pay a high price, so long as China insulates Pyongyang from outside pressure. While the Xi government appears irritated, even angry, with its small neighbor, Beijing is not yet willing to risk its relationship with North Korea, or the latter’s stability, by ramping up the pressure.

In January, House Foreign Affairs Committee Chairwoman Ileana Ros-Lehtinen introduced legislation to effectively reimpose the terrorism designation. Last year, the House approved Rep. Ed Royce’s H.R. 1771, which proposed unilateral measures to enforce multilateral sanctions. Ros-Lehtinen’s H.R. 204 is substantially more punitive. The bill’s “findings” are a veritable kitchen sink of complaints of DPRK misbehavior including “duplicity in its negotiations with the United States” and defiance of “the international community.” The measure urges the administration to relist the North as a SSOT, imposes the penalties for being listed as a SSOT, and sets numerous impossible conditions (opening North Korean prison camps to international inspection, for instance) for lifting sanctions. Almost as an afterthought, the bill bars any expenditure to open diplomatic relations.

In a new study for the Committee for Human Rights in North Korea, attorney Joshua Stanton argues for formally putting Pyongyang back on the list. He writes that “North Korea’s sponsorship of terrorism is a threat to human rights in several regions of the world today.”

Although a SSOT listing sounds ominous, the designation simply triggers a package of economic sanctions. Individuals and institutions are barred from dealing with the relevant government; there is no sovereign immunity from lawsuits over terrorist incidents; U.S. representatives in multilateral development banks must oppose aid to listed governments; the latter are not eligible for U.S. financial assistance; trade in sensitive goods is barred; visas are denied to nationals of designated nations; other restrictions are imposed.

Many of these already apply to North Korea and others aren’t particularly relevant. No North Korean firm is in line for a federal contract, for instance. Perhaps the most important effect would be to intensify the DPRK’s sense of isolation. American engagement would look even further away, though other nations pay little attention to the designation.

Yet as deserving as the North might seem for punishment, returning it to the SSOT list would be a mistake. The policy is utterly incoherent and entirely political. Only Iran, Sudan, Syria, and departing Cuba currently are on the list, and none has engaged in terrorism against America, at least within normal memory. If terrorism is the actual concern, why aren’t Pakistan, Qatar, and Saudi Arabia on the list? Even Stanton acknowledged that standards for designation are “vague and inconsistent.”

Stanton does a lawyerly job of offering evidence that the DPRK government is a nasty piece of work. Over the last decade or so it has kidnapped and assassinated opponents, supported groups and governments opposed by the U.S. government, attacked South Korea, launched cyber-attacks, sold nuclear technology, and conducted missile and nuclear tests. What Pyongyang apparently has not done since 1987 is initiate a terrorist attack against anyone, let alone America. North Korea is an evil state, not a terrorist state.

Washington should not stretch the definition of terrorism past the breaking point to cover all manner of activities that are not by any normal understanding considered to be terrorism. Especially since the designation has had no practical impact on the North. After all, Pyongyang conducted many of the activities cited by Stanton while on the list. It has continued to behave badly while off the list. Relisting the DPRK wouldn’t likely change anything.

Moreover, North Korea appeared to gain little economic benefit after being removed. Many other federal restrictions still apply and few U.S. firms have demonstrated much interest in entering a market that is inhospitable even to Chinese firms. In a report earlier this year, the Congressional Research Service concluded that relisting the DPRK “appears unlikely to inflict significant economic punishment on North Korea, especially in the short term.” And no other nations would likely follow Washington’s lead. The understandable sense of moral satisfaction gained would not be matched by any practical advantage.

Indeed, the ineffectiveness of U.S. policy was a good argument for the Bush administration’s decision to delist the North. The Clinton administration’s Agreed Framework slowed North Korean nuclear developments; in contrast, George W. Bush’s attempt to isolate the government of Kim Jong-il, in Bush’s view a loathsome member of the “axis of evil,” failed utterly. Not only has Pyongyang continued to treat its entire nation as a prison, it has engaged in the activities documented by Stanton and by some estimates could amass a nuclear arsenal as large as 100 warheads by 2020.

When everything else has failed, it makes sense to look for alternatives. And that is easier when the law does not limit diplomatic and economic options. Nor would Pyongyang necessarily remain quiescent in response to what it would see as another U.S. attack. Warned CRS, the DPRK could “respond to a redesignation by taking additional provocative actions, such as more nuclear-weapon or long-range-missile tests.” Beijing might be less receptive to American concerns over Pyongyang’s behavior. Indeed, China routinely meets U.S. complaints with the response that the U.S. should engage rather than threaten the North.

Washington’s official terrorism designation has never had much to do with actual support for terrorism. Noted CRS, “historically, diplomatic and policy considerations appear to have played a prominent role in the State Department’s decisions about the DPRK’s place.” And in designating other nations as well. Instead of making the SSOT standards clearer, Congress should eliminate the designation altogether. If Washington wants to penalize another country, it should do so directly. By relying on an arbitrary label (the narco-state listing runs into similar problems), U.S. officials spend more time avoiding than applying the law.

Calling North Korea a terrorist sponsor might offer emotional release, but won’t make the claim true. Moreover, relisting Pyongyang would be no substitute for reconsidering Washington's ineffective policy toward this difficult and threatening state. There are no good answers when dealing with the North. But an SSOT designation would be a bad one.

Doug Bandow is a Senior Fellow at the Cato Institute. A former Special Assistant to President Ronald Reagan, he is author of Tripwire: Korea and U.S. Foreign Policy in a Changed World.