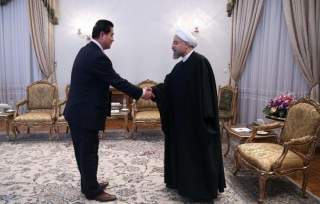 A central plank of the Obama administration’s case for the nuclear deal just concluded by the P5+1 powers is that the agreement closes off "all pathways” by which the Iranian regime could acquire a nuclear capability, at least for the coming decade.

That, however, simply isn’t true. The Joint Comprehensive Plan of Action (JCPOA), as the new nuclear bargain is officially called, only addresses the overt means by which Iran might go nuclear. A covert path to the bomb, entailing the procurement of materiel from foreign suppliers, still remains open to Iran, if it chooses to take that route.

If it does, the Islamic Republic will invariably look to Asia. That’s because over the past three decades, Iran and the Stalinist regime of the Kim dynasty in North Korea have erected a formidable alliance—the centerpiece of which is cooperation on nuclear and ballistic-missile capabilities.

As long ago as 1985, the two countries had already launched cooperative missile development, with Iran helping to underwrite North Korea's production of 300-kilometer-range Scud-B missiles. Their interaction expanded in the 1990s, when Iran and North Korea began joint development of Iran's Shahab medium-range missile, which is closely based on North Korea's own nuclear-capable No Dong.

Indeed, North Korea’s arsenal is the inspiration behind most of Iran’s ballistic-missile capabilities—including the Shahab 3 and Shahab 4, now in service, and its longer-range Shahab 5 and 6 variants, currently in development. And the collaboration continues today; the two nations are believed to be jointly working on a nuclear-capable missile of intercontinental range.

The Islamic Republic has also relied on the DPRK for help with its nuclear program. In recent years, North Korea is known to have assisted in fortifying a number of Iranian nuclear facilities against possible preemptive strikes. It has also reportedly dispatched hundreds of nuclear experts to work within the Islamic Republic, as well as providing Tehran with key nuclear software.

In a public sign of this collusion, a delegation of Iranian scientists was on hand during North Korea's very public February 2013 nuclear test. The Iranian experts are believed to have paid tens of millions of dollars to the DPRK for a front-row seat to the successful detonation.

But the North Korean-Iranian alliance isn’t merely transactional. At its heart is a shared antipathy toward the West. As Iranian Supreme Leader Ali Khamenei told Kim Yong Nam, the powerful Chairman of the Presidium of North Korea's Supreme People's Assembly, in September of 2012, when they concluded a new agreement on scientific-technical cooperation, the two countries share “common enemies” in the “arrogant” nations of the United States and Europe.

Now, the Iranian-North Korean alliance is poised to take a major leap forward. Under the terms of the JCPOA, Iran will need to disclose key information regarding its military-related nuclear work to the International Atomic Energy Agency in the coming months. Once it does, the Islamic Republic will reap an unprecedented financial windfall, totaling $100 billion or more—equivalent to roughly a quarter of Iran’s total annual GDP.

That money will dramatically increase Iran’s purchasing power globally, including its ability to pursue a clandestine path to the bomb. It will also make Tehran, already an important strategic partner, even more indispensable to the cash-strapped regime in Pyongyang.

Iran, for its part, now finds itself in a position to take a page from North Korea’s nuclear playbook. Since the early 1990s, the North has engaged in extensive diplomacy with the international community over its atomic effort, obtaining significant diplomatic and economic benefits as a result. These inducements played an instrumental role in strengthening and stabilizing the Kim regime.

They did not, however, lead Pyongyang to give up its nuclear program. Over time, it has reneged on every single international commitment relating to its nuclear effort, from uranium enrichment to plutonium production to atomic testing. It has done so, moreover, largely without consequence from the international community, which has consistently attempted to moderate North Korean conduct through conciliatory steps, rather than punitive ones.

Much like North Korea before it, the Iranian regime can be expected to pocket the concessions contained in the JCPOA as a means of strengthening its economic position and consolidating its domestic power. But, also like Pyongyang, the West's current diplomatic bargain isn’t likely to chill Tehran's enthusiasm for nuclear status.

In fact, it is likely to do exactly the opposite, while giving Tehran the means to move even closer to the bomb. Iran’s strategic alliance with North Korea could very well do the rest.

Ilan Berman is Vice President of the American Foreign Policy Council in Washington, DC, and author of the new book, Iran’s Deadly Ambition: The Islamic Republic’s Quest for Global Power, from Encounter Books.