North Korea: It's About America's Allies (or Should Be) 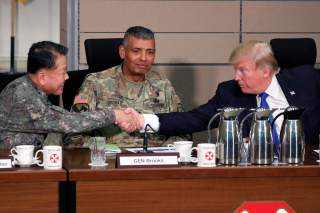 Throughout the Cold War, the Soviet Union and China supported North Korea. When the Soviet Union collapsed their support to North Korea ended, we assumed that our problems with North Korea would end. They didn’t, and in some ways, they became more intractable. This would not be our last intelligence failure.

In 1994 we seriously considered going to war with North Korea over their nuclear program. We opted instead for negotiations. Former President Jimmy Carter secretly went to North Korea to convince them to negotiate. This eventually led to the Agreed Framework agreement, in which North Korea agreed to freeze their nuclear program in exchange for two proliferation-resistant nuclear power reactors along with fuel oil to keep them comfortable while the reactors were built. This would not be the last former U.S. president to honor North Korean leadership with a visit.

North Korea eventually broke this agreement, but perhaps it did some good. Many believe that they would have hundreds of nuclear weapons by now without the agreement.

This episode established a pattern used with subsequent nuclear and missile provocations. First, we consider preemptive military attack. Thus far we have always concluded that this is impractical. Our allies would likely suffer catastrophic damage, and North Korea does not present vulnerable, unitary targets like the Osirak reactor in Syria before the Israelis destroyed it. Given our actionable intelligence difficulties with North Korea, we can assume their assets are distributed, fortified, and defended. Massive numbers of artillery tubes, ammunition, and missiles are in deeply buried and hardened installations in the Kaesong Heights overlooking Seoul. At least five large tunnels suitable for mass military movements are under the DMZ, allowing rapid movement of forces to the South. Japan lies within easy range of North Korean missiles, demonstrated as early as August 31, 1998. After looking at the hazards of preemption, we offer concessions to get North Korea back to a negotiating table. Various theories are proposed about “what Kim really wants.” (At a minimum, he wants deliverable nuclear weapons. It’s highly likely that he wants to unify the peninsula on his terms—a much more difficult challenge for our alliance.)

If North Korea agrees to anything, they always break the agreement. The last resort is always sanctions, always with the promise that “this time they will bite.” The very existence and the success of their nuclear and missile programs shows the failure of sanctions over the decades since 1994.

So, how does an impoverished state with an autarkic economy, unreliable or non-existent energy grids beyond the capital, a woeful national GDP, food-production struggles including widespread malnutrition and famine, and unparalleled human rights abuses continue to defy all national and international efforts to become, as some now allege, an “existential threat” to the United States? It must be noted here that North Korea has been an “existential threat” to our allies, Japan and the Republic of Korea, for quite some time. They must be wryly amused to see the United States fully alarmed only now.

Two powerful factors, among innumerable others, underwrite North Korea’s successful weapons programs. They are the nature of the regime, and the power dynamics of East Asia.

The Democratic People’s Republic of North Korea is less a country as we understand that term than a family-run criminal enterprise. Their homegrown Juche (self-reliance) replaced Marxism/Leninism, the Workers Party of Korea is their single party, and their constitution calls for a “dictatorship of the people’s democracy.” This structure produced the only hereditary leadership transitions in the Communist world not once but twice.

Lacking, by design, the usual attributes, and vulnerabilities, of nations engaged in and profiting from global commerce, the DPRK maintains a global network to provide resources to the center—the Kim family. Such efforts are both overt and covert. The overt include overseas workers, embassies, consulates and declared businesses. The covert efforts include businesses with false identities, false-flag shipping and other means.

Far from being isolated, this is a global effort working alongside—or underneath—legitimate commerce and trade. Indeed, many DPRK efforts have infiltrated legitimate business and clandestinely operate within those structures.

East Asia’s power dynamics provide a warm, if not congenial, environment for North Korea. Beijing can apply pressure on North Korea, but only up to a point. North Korea’s existence is part of China’s heroic narrative of China “standing up” following Mao’s 1949 victory in their civil war, and their emergence from the “Century of Humiliation.” The entry of Chinese forces into North Korea in 1950 is part of the heroic narrative. Mao’s son, Mao Anying, lies buried in North Korea. A statue to the Chinese People’s Volunteers at a martyr’s cemetery commemorates his service. Former premier Wen Jiabo paid his respects there in 2009.

Even more compelling in China’s calculation is the strategic value of North Korea to China’s security. They most surely have their own set of frustrations with North Korea’s leadership and their nuclear weapons program, but that does not extend to toleration of any other powers gaining influence, much less a presence, there. The United States is not the only party choosing among lousy options here.

There are those in all nations in Asia and around the world that profit handsomely from North Korea’s operations, legal and illegal. Absent strong will to enforce laws, and the ability, they see little reason to sacrifice current economic gain to aid a fight “over the water.”

ASEAN’s nations and others—notably in Africa—host many North Korean workers. Expelling workers is no simple task, or without serious consequences. Perhaps the fear of retaliation is why the latest UN sanctions direct workers to be removed in two years—hardly a meaningful timeline in this crisis. North Korea’s successful February deployment and employment at Kuala Lumpur Airport, Malaysia, of a weapon of mass destruction—VX, the most potent nerve gas yet devised—demonstrated both skill and will. This was a sophisticated, precise attack with a weapon capable of massive destruction. It removed an irritant to the family, half-brother Kim Jong Nam, and served notice of North Korea’s reach and determination throughout Southeast Asia. It also served notice to China that they can be hit. Kim Jong Nam was under China’s protection. Imagine the effect on Malaysia, the rest of Southeast Asia, and the world, if this weapon is deployed against populations.

Perhaps most troublesome, China now has considerable leverage to demand reward for services rendered with North Korea, assuming they would decide to apply pressure. China’s “Belt and Road” initiative, the Asia Infrastructure Investment Bank, the “16+1” initiative in Europe, President Xi’s assumption of international development leadership at the Davos meeting, and others, fill the vacuum created when we abandoned our own Trans Pacific Partnership.

China’s growing military power reinforces perceptions of American political, economic and military withdrawal from Asia. China is again pressing the Republic of Korea over the installation of Theater High Altitude Area Defense (THAAD), an action taken in response to the missile and nuclear capability made manifest by North Korea. They will soon challenge Japan’s adoption of Aegis Ashore, punishing Japanese business. China’s territorial acquisition efforts in the South China Sea went unmentioned in the most recent leaders’ meeting in Beijing. Many interpreted this as a signal. China may demand concessions elsewhere in Asia for help with North Korea. Taiwan should be very nervous, as should other regional powers.

Threatening military destruction of North Korea is not enough. And not needed. Our capabilities are well known, and even exaggerated. A credible and convincing U.S. policy must focus on the safety and the security of our allies, not just on our ability to punish an enemy. We need to realize that U.S. credibility is damaged. We made statements about “red lines” in the past, and failed to follow through. More recently we openly disparaged allies and alliances, as well as the components of a liberal democratic order. Our value to alliances has been damaged by abandonment of existing agreements and threats to abandon our trade agreement with South Korea.

We need to speak far more about our values and far less about concessions, especially when security is at stake. It’s no accident that South Korean president Moon Jae-in speaks of "balanced diplomacy" repeatedly, poised between the historically powerful United States and the newly ascending China. A recent approval of Korean military technology to China for export is troublesome. We should pay attention.

Deterrence—an ability to defeat attacks not just punish after the fact—must be greatly strengthened in the near term, beginning yesterday. We must ensure that the people of South Korea and Japan remain convinced of our undoubted ability to prevail, promptly and efficiently. We must redouble our efforts in air and missile defense, and ensure other avenues to deploy weapons of mass destruction are closed off.