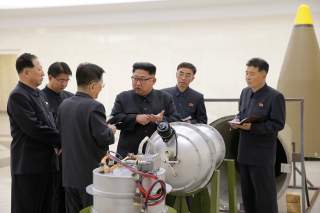 “When someone shows you who they are, believe them the first time.”—Maya Angelou

Maybe now we will finally realize who North Korea is. Over the decades since the collapse of the Soviet Union we repeatedly assured ourselves and others that negotiations, agreements, economic cooperation, sanctions, threats and international scolding could reform, or at least restrain, North Korea. Each stratagem was tried in its turn, and repeated, to little effect. But we felt better. For a while.

In the first post-Soviet happy celebratory days, we assumed that the loss of North Korea’s most generous patron doomed the regime. We soon realized that the regime was not going away quietly, like Nicolae Ceausescu, when Kim Il-sung first raised the nuclear specter. We were forced to adjust. A fundamental, if implicit, assumption since that time was that we must deal with North Korea as a country, brutally and eccentrically autocratic to be sure, but one that would react to the right mix of policies and strategies by the United States and our allies. That’s what governmental institutions do, after all. Our leadership after WW II is rightly celebrated for creating the structure—UN, CIA, Joint Staff, Unified Commands, a National Security Council with a staff, the Bretton Woods Agreement, the World Bank, many others—to deal with a survival-level global threat to democracy and capitalism.

That structure worked, and it still works. It works so well that we take it for granted, at great risk. But North Korea is immune to the persuasive and coercive levers of that structure.

Since the end of the Cold War, the Kim dynasty thrived through a global illicit network, greatly aided by the same globalization technologies we rightly celebrate in business enterprises. They collaborated with Abdul Qadeer Khan’s clandestine trade in nuclear technology and material, including warhead design. They found similar willing collaborators on missile technology, and chemical weapons. They developed impressive cyberwarfare capabilities—just ask SONY USA. North Korean workers and front organizations operate across the world, with tacit forbearance from their hosts.

Their massive conventional artillery and rocket forces in deeply buried and hardened shelters throughout the Kaesong Heights fronting Seoul gives North Korea great leverage over our Korean ally. Similarly, their nuclear and missile capabilities coerce Japan. China worries about a united Korea on its border, democratic and aligned with Washington. North Korea’s demonstrated willingness to employ highly potent chemical weapons far from the Hermit Kingdom serves notice on countries hosting North Korean laborers—and sourcing the salaries they send home—that no one is beyond their reach.

U.S. vital interests in Asia have been under attack for quite some time. As the post–World War II world became evident, we opted for an Asian presence anchored on the First Island Chain. The sudden invasion of the new Republic of Korea, and the precedent that this threat represented to our developing position in Europe, extended our presence to the peninsula. Our national presence—with all our elements of national power—in the region remains vital today.

Recent statements by Defense Secretary James Mattis and Gen. Joseph Dunford describe our intentions to respond to any attack. Our next actions must be rapid enhancement of the capabilities of our alliances to enhance deterrent capability and our allies’ confidence in the United States. This means the deployment of additional capabilities. Enhanced air and missile defense as well as greatly accelerated bi- and trilateral exercises are urgently needed.

We must also bring the full power of our economic and law-enforcement institutions to bear to shut down North Korea’s global black market. The very nature of the North Korean regime must drive our selection of ends and ways for what must be a robust “whole of government” effort. We used to be able to do this well. We must do it again.

Other nations, particularly those in the region, must be told of our intentions and efforts. Events recently, and over the years since the emergence of North Korea’s nuclear capability, show that no other nations can or will help. Therefore, we are acting unilaterally. This is just business, nothing personal. Interestingly enough, China may mind a lot less than we think. Kim’s latest is an affront to Xi Jinping, as well, as he heads into the nineteenth party congress.