North Korea is More Perilous than Ever 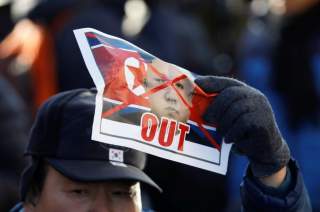 “We are closer to potential conflict on the [Korean] Peninsula than we’ve been since 1994,” said Bruce Klingner of the Heritage Foundation, adding that this was due to North Korea’s growing missile capabilities and military and sanctions options that are being discussed by the Trump administration. It was with this thought-provoking pronouncement that Klingner began his opening remarks at an event held on Tuesday at the Center for the National Interest. On the eve of the 2018 Winter Olympics hosted by South Korea, the mood on the Korean Peninsula remains tense, with U.S. officials weighing the possibility of launching a preemptive strike against the Hermit Kingdom. It was in this context that the Center for the National Interest gathered international policy specialists, military experts, and journalists to discuss the situation and consider the questions that would matter moving forward: Will there be North Korean provocations, or even bolder actions, during the games? How did the United States and North Korea get to this point? And what strategy should Washington employ moving forward?

Speaking before the gathered guests were Bruce Klingner, a senior research fellow at the Heritage Foundation and twenty-year veteran of the CIA and DIA, and Lt. Gen. (USMC, Ret.) Wallace C. Gregson, the senior director of the Center for the National Interest’s China and the Pacific Program and a former commander of the U.S. Marine Corps Forces in the Pacific. They spoke about the current state of tensions between North Korea and the United States/South Korea, North Korea’s missile capabilities, and what steps the United States should take in confronting Pyongyang. Harry Kazianis, executive editor of the National Interest and director of defense studies at the Center for the National Interest, moderated.

Continuing his opening remarks, Klingner spoke of Pyongyang’s growing missile capabilities, clarifying that some of the launches seen have been actual missile development tests while others are war plan exercises. Taken together, “North Korea has the ability to hit all of South Korea and Japan today with nuclear weapons,” and the country is continuing to work on missiles that could reach the continental United States and its island territories. Klingner noted that the United States has a “tendency to downplay North Korean capabilities” until reality becomes quickly apparent. He believes that the regime is close to achieving ICBM capability. This sense of a rapidly impending new reality is what has pushed the Trump administration to consider preemptive action against North Korea, which Klingner describes as having “sucked[ed] the air out of the room for Korea watchers last year.”

Gregson painted a dire portrait of the North Korean regime, emphasizing that it is at bottom a gangster state: “It is a global criminal enterprise run by the family at the center of the enterprise” that will in all likelihood seek to resume “nuclear blackmail” once the Olympics end. He stated up front that “the initiative rests with Kim Jong-un,” and that the North Korean regime’s goal remains the unification of the Korean Peninsula under the North’s terms. Citing a recent poll from the Pew Research Center, Gregson argued that North Korea has political and diplomatic avenues of attack because “less than 20 percent of South Koreans have confidence that President Trump will do the right thing in world affairs.” He lamented that the United States has broken international agreements in the past year, and has unsettled close allies. He also indicated that the Trump administration has unnecessarily elevated the North Korean dictator by directly assailing him in personal terms: “He’s one guy. We’re bigger than that. We don’t deal with tinpot dictators on a personal level.”

Stating that diplomacy alone will not resolve the situation with North Korea, and that some risk is necessary, Gregson listed the elements of a strategy that could be deployed against Kim Jong-un’s regime. These include efforts to “enhance and expand the financial sanctions, both primary and secondary;” conduct maritime interdiction operations against ships” that we are already tracking; “increase the capabilities of our two most directly affected allies,” particularly in regards to missile and air defense; keeping China notified of all actions being undertaken while making it “about our national interests, not their interest;” repairing relations with South Korea; “eliminate ammunition, training, and readiness shortfalls in our forces at WESTPAC; update counter-provocation strategies with South Korea; and increase diplomatic, economic, military, intelligence, and law-enforcement pressure to deter other states from tolerating North Korean criminal operations.”

After both panelists finished their opening remarks, the conversation was opened up the floor. Dimitri K. Simes, President for the Center for the National Interest, asked the speakers, “does anyone believe that there is a combination of pressure and accommodation that could persuade Kim to give up his nuclear missile program?” Klingner said that there wasn’t much optimism that this could occur, but that it was better to pursue the possibility rather than “abandoning all hope.” Klingner contended that the best approach is better to maintain political and economic pressure on the North Korean regime in order to force Kim Jong-un to the negotiating table. Gregson stated that he didn’t think there is “any way we are going to convince Kim Jong-un to abandon his nuclear program let alone give up the nuclear weapons.” As a “brutal autocratic leader” not above killing his own family members and inner circle lieutenants, showing weakness could result in his own demise. Gregson also noted that the United States has been “quite clear” about sending Kim to International Criminal Court at the Hague if possible, so there is no escape abroad for him. The way forward, Gregson argued, is to produce a global containment strategy of the North Korean threat, with an emphasis on protecting “the territory, the interest, and the lives of our allies and friends, and their faith that we can handle matters intelligently and that we’re not going to start something that causes a conflict where they would take the vast majority of the damage.”

J. Stapleton Roy, a former American ambassador to Singapore, China, and Indonesia and the founding director emeritus of the Kissinger Institute on China and the United States at the Wilson Center, commented that “there is a very high level of mistrust in China over their suspicion that we are using the North Korea issue over in China that we are using the North Korea issue as a way of enhancing our deterrence against China and the North Korea is simply being used by us as a tool.” Roy also asserted that it might be tempting to sanction Chinese banks that work with North Korea, but that he believed it was a “catastrophic error” on the part of the George W. Bush administration to sanction a Chinese bank shortly after reaching a possible denuclearization agreement with North Korea. In his view, this aborted the possibility for further progress. In addressing the panelists, Roy asked if they thought if the United States is “capable of having a comprehensive strategy on North Korea, given the nature of our president, his propensity to speak […] injuriously […] and given the fact there is a very clear, fundamental split in the administration” between those who don’t believe in the possibility of a preemptive strike and those who do, or at least, in bluffing that it can be done.

Klingner answered that there tend to be varying strategies proposed by differing think tanks and institutions, and that all of these believe theirs is the correction path to take. Gregson thinks that “we have not done that well” with a comprehensive strategy in the past, but views the recent National Security Strategy and National Defense Strategy as a step in the right direction. Whether the strategy can be followed up on is to be determined though, he cautions. Ultimately, Gregson concluded, Washington should follow a policy of vigorous containment of North Korea. It must become the victim of its internal debilities. Launching an overt military attack could result in a catastrophe. Asked by National Interest editor Jacob Heilbrunn whether Trump might respond that the policies Gregson was espousing had simply led to the present stalemate and that he was seeking a new course, Gregson responded that “we lived with the existential threat of the Soviet Union” for decades. If Trump continues to press for a potential rollback of North Korea, then he will fully revive the political debate that also accompanied the cold war in America. Is it enough to contain an adversary or is it necessary to seek overt regime change through direct military action?