North Korea Shows How the Iranian Nuclear Deal Will Fail 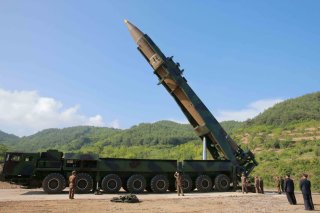 Over thirty years ago, North and South Korea signed a “Denuclearization” declaration forswearing plutonium reprocessing, uranium enrichment, and the development, testing, or possession of nuclear weapons. To reach an agreement, the United States removed its own nuclear missiles from South Korea and canceled its annual military exercises. Secretary of State James Baker patted himself on his back. “American diplomacy [was] directly responsible for an end to six years of intransigence by the North.” The deal assuaged Washington but did not derail Pyongyang’s ambitions. Fourteen years later, North Korea conducted its first nuclear test. It was not the last time an American president would claim that a limited nuclear deal ended a proliferators’ nuclear desire.

Rogues know that brinksmanship against the United States works. Thirteen months after the United States declared victory, North Korea threatened to leave the Nuclear Non-Proliferation Treaty (NPT) over concerns about Pyongyang’s nuclear activities. The Kim regime’s nuclear escalation should have raised red flags in Washington, but failed to do so. Instead, diplomacy’s cheerleaders preferred to blame Americans for these failures. As a remedy, President Bill Clinton briefly considered military action but decided against it, and by the end of the year, all signs of progress evaporated. North Korea threatened to turn Seoul into a “sea of fire,” and Pyongyang again blocked inspections.

Clinton sought to keep North Korea inside the NPT at any price. “If North Korea could walk away from the treaty’s obligations with impunity at the very moment its nuclear program appeared poised for weapons production, it would have dealt a devastating blow from which the treaty might never recover,” U.S. negotiator Robert Gallucci explained.

It was a case of not seeing the forest for the trees. The scramble to preserve the limited deal blinded Washington to Pyongyang’s greater interest: preventing inspectors from sites that would demonstrate nuclear work. Just as with the Iran nuclear negotiations now, the goal appeared more for the president to show “the paper which bears his name upon it as well as mine” than to prevent an adversary’s empowerment.

Clinton eventually reached a deal—the 1994 Agreed Framework—that, in theory, put North Korea’s nuclear program in a box. But, it did nothing of the sort. Instead, the agreement ignored Pyongyang’s past NPT violations and provided Kim's regime a $4 billion payout.

Unfortunately, the George W. Bush administration repeated this pattern. Almost eight years after signing the Agreed Framework, North Korea admitted to pursuing a covert uranium enrichment program after U.S. intelligence confronted them. President Bush initially listed Pyongyang as a member of his “Axis of Evil,” but six years later, he paid the Kim regime $2.5 million for the political theater of blowing up the Yongbyon Nuclear Scientific Research Center.

Today, the same pattern repeats with only minor variations in the Iran negotiations. When, in July 2015, the P5+1—the United States, France, Germany, United Kingdom, Russia, and China—agreed to the Joint Comprehensive Plan of Action (JCPOA) with Iran, politicians sang its praises. We have “achieved something that decades of animosity has not -- a comprehensive, long-term deal with Iran that will prevent it from obtaining a nuclear weapon,” President Barack Obama declared. The Biden administration is repeating this pattern with its singular focus on returning to the expiring, limited nuclear deal.

First, the JCPOA does not address past and future Iranian covert nuclear activities. The deal spelled out an inspections regime for Iran’s declared nuclear facilities. While JCPOA supporters claim the deal includes stringent International Atomic Energy Agency (IAEA) inspections—a debatable assertion—what is certain is that the IAEA did not know about Tehran’s undeclared nuclear activities before Israel stole Iran’s nuclear archive in 2018. That operation proved false Obama’s assertion that the accord has “the most comprehensive inspection and verification regime ever negotiated to monitor a nuclear program.” He added, “The bottom line is, if Iran cheats, we can catch them—and we will.”

Iran has also consistently blocked full inspections, especially of sites it defined as military. Indeed, this has always been among the red lines articulated by Supreme Leader Ali Khamenei. In February 2021, Iran reduced the IAEA’s ability to monitor Tehran’s nuclear program. While partisans will blame President Donald Trump’s withdrawal from the JCPOA, this agreement did not supplant Iran’s NPT commitments that it again violates. Countries do not reduce monitoring if they have nothing to hide. It is possible to hide a centrifuge cascade. The Institute for Science and International Security estimates that if Iran used its current stockpile of enriched uranium in a clandestine 650 IR-6 cascade, a configuration that could be placed in a small warehouse, it could make enough weapons-grade uranium for one nuclear weapon in about a month.

Second, the 2015 deal does not address Tehran’s cooperation with North Korea. The UN Panel of Experts determined that Iran and North Korea had resumed cooperation on long-range missiles in 2020. North Korea’s weaponization program has advanced since its first nuclear test in October 2006. Pyongyang can provide lessons learned or specific techniques to help Iran’s weaponization efforts. Certainly, the renewed resourcing of the Islamic Republic as a result of sanctions relief, waivers, and new foreign investment could allow Iran to fund this cooperation from a North Korean regime that is willing to sell weapons and missile technology to the highest bidder. At a minimum, Pyongyang could provide expertise and information that allow Tehran to shorten its weaponization timeline. The work could occur in North Korea or Iran if Tehran would not allow any off site work by Iranian scientists. All of this covert activity would be hard to detect and disrupt.

Nuclear negotiations with North Korea have shown us that limited nuclear deals allow the proliferator the time and space to develop nuclear weapons. President Joe Biden must reject the mistakes of his predecessors and insist on a longer and stronger deal that eliminates Iran’s pathway to a nuclear weapon.

Anthony Ruggiero and Michael Rubin are, respectively, senior fellows at the Foundation for Defense of Democracies and the American Enterprise Institute.