North Korea Summit Should Be About Substance, Not Flash 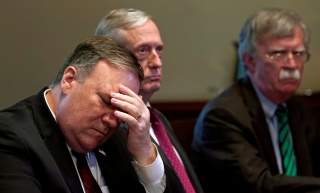 With the Capella Hotel in Singapore announced as the site of the June 12 summit between U.S. president Donald Trump and North Korean leader Kim Jong-un, it appears that the two are on track to meet next week after a tumultuous month in their relationship. On May 24, the White House released a letter from Trump to Kim canceling their much-anticipated summit, only to reinstate it on June 1. The way the Trump administration executed these decisions is another example of how its conduct over the past months has hurt U.S. leverage and alliances in regard to North Korea and obscures the fact that the administration’s priority should be substantive progress, not summit showmanship.

Since the March 8 announcement of a Trump-Kim meeting, diplomacy has seemed almost too easy. There were signals that gave hope that maybe this time, North Korea would actually make good on its deals. Kim went on a charm offensive, meeting Chinese leader Xi Jinping twice and holding a much-hullabalooed meeting with South Korean president Moon Jae-in. Secretary of State Mike Pompeo traveled to North Korea twice and insisted that Kim Jong Un was on the same page about denuclearization as the United States.

However, the gap between the two countries became undeniable on May 16 when North Korea threatened to pull out of the summit if the U.S. continued to push for a unilateral, Libya-style denuclearization model. On the 23, Trump said there was a “substantial chance” that the summit would not work out. Following this, North Korean vice foreign minister Choe Son Hui threatened the summit and insulted U.S. Vice President Mike Pence for bringing up Libya-style denuclearization. It appears that as soon as North Korea made it clear it wasn’t going to quietly acquiesce to U.S. demands for complete, verifiable, and irreversible denuclearization (CVID), the Trump administration wasn’t prepared to play diplomatic hardball and canceled the summit.

This amplifies concerns that Trump is more concerned with the summit’s style than its substance. Without a huge deal that looked good in the press and in the eyes of the Norwegian Nobel Committee, Trump would rather quit. In addition, issuing commemorative coins for the summit is another example of Trump aggrandizing his performance (and also counting his decommissioned nuclear weapons before they’re disassembled).

While Trump was patting himself on the back for a job not yet done, his team was in total disarray. Pence and National Security Advisor John Bolton were publicly advocating for Libya-style denuclearization while Pompeo had been less aggressive in his stance. Trump was reported to be completely unprepared for the meeting and believed he didn’t need to do his homework. If Trump had canceled the summit to align his team while developing a negotiating strategy, the cancellation would have been welcome. However, the order of events suggests withdrawing was more about preserving Trump’s ego than making actual progress on the peninsula.

The manner in which Trump canceled the meeting is also deeply troubling. He does not appear to have consulted Japanese or South Korean leadership before making this decision. For example, the day before Trump called off the summit, Pompeo met with Japanese Minister for Foreign Affairs Taro Kono and discussed coordination on the summit. Furthermore, Moon had to hold a middle-of-the-night meeting with his team to react to Trump’s letter. In fact, Pompeo declined to comment on whether South Korea had been informed before the president made his decision. All of this suggests that Trump made this decision unilaterally, damaging U.S. alliances.

If Trump truly wants to address the threats posed by North Korea, he needs to be on the same page as America’s allies – not leaving them in the lurch. While Trump has damaged the U.S. position for any future negotiations with North Korea, Kim has strengthened North Korea’s hand. He’s in close coordination with China after years of their relationship souring. Additionally, America’s economic sanctions campaign against North Korea is weakening. Finally, with the U.S. continuing to undermine its alliances, South Korea is also more likely to accept overtures from North Korea that it would reject were it sure about America’s commitment.

With the summit is back on, the question again becomes what, exactly, is Trump’s game plan? Is he ready for a long, hard diplomatic process? Or is he looking for a photo op? However, what is truly important is not whether Trump and Kim sit down in a room together, but whether substantive progress can be made on the Korean Peninsula. And for that to happen, the Trump team needs to develop, in close coordination with Japan and South Korea, a unified strategy that protects the interests of America and its allies.

Abigail Bard is a research assistant for National Security and International Policy with a focus on Asia Policy at the Center for American Progress.