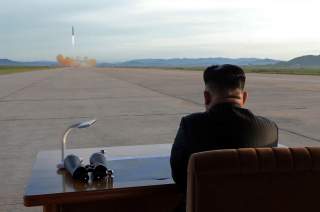 After a months-long lull in activity, North Korea test launched an intercontinental ballistic missile (ICBM) on what appears to have been a lofted trajectory. According to the Pentagon, the weapon flew for a distance of one thousand kilometers before splashing down near Japan. Very few details were immediately available.

“Initial assessment indicates that this missile was an intercontinental ballistic missile (ICBM),” Pentagon spokesman Col. Robert Manning said in a statement. “The missile was launched from Sain Ni, North Korea, and traveled about 1000km [621 miles] before splashing down in the Sea of Japan, within Japan’s Economic Exclusion Zone (EEZ).”

The South Korean Yonhap wire service—which initially reported the North Korean missile test based on its sources in Seoul—offered some additional details. According to the wire service, the weapon flew a horizontal distance of 960 kilometers (597 miles) but reached an altitude of 4,500 kilometers—or 2796 miles.

That means that the missile flew a high lofted trajectory out into space—well above the orbit of the International Space Station at 408 kilometers (253 miles)—before coming back down after its roughly fifty-three-minute journey, landing some 210 kilometers (130 miles) off the Japanese coast. The missile also flew significantly higher than North Korea’s previous ICBM test on July 28, which reached a comparatively paltry 3,700-kilometer (2,300-mile) altitude.

While it is too early to be certain as to exactly what kind of missile the North Koreans tested, analysts are starting form a consensus that the weapon was a HS-14 ICBM. It was a “Hwasong 14 with a bigger upper stage,” Jeffrey Lewis, director of the East Asia Nonproliferation Program at the James Martin Center for Nonproliferation Studies at the Middlebury Institute of International Studies at Monterey told the National Interest.

Others agreed with that assessment—and suggested that further North Korean missile tests would push the envelope further as Pyongyang attempts to perfect an ICBM capability that could strike directly at the U.S. mainland. “I’m guessing it’s a HS-14 with an improved second stage,” Joshua H. Pollack, editor of the Nonproliferation Review and a senior research associate at the James Martin Center for Nonproliferation Studies, told the National Interest. “Based on what we saw them do with the HS-12 earlier this year, the next step would be to go over Japan, preferably in a lightly populated area like Hokkaido or northern Honshu.”

While it should have been apparent to everyone after North Korea’s July 28 ICBM test that Pyongyang now possesses a weapon that can strike directly at the United States, this latest missile test removes any doubt that the Democratic People’s Republic of Korea (DPRK) has the capacity to hold the American homeland at risk. That holds true even if the North Korean weapon has not yet been perfected.

“Today’s test is North Korea’s third successful ICBM test since July. The test flew longer and higher than the previous two tests, suggesting that North Korea has improved the capability of its (likely) HS-14 ICBM,” Kingston Reif, director for disarmament and threat-reduction policy at the Arms Control Association told the National Interest. “North Korea is likely to want to conduct additional tests to increase confidence in its capabilities, particularly an ICBM on a minimum energy trajectory and its reentry systems. But if North Korea hasn’t already mastered the required technologies, on its current testing and development pace it will likely do so soon.”

Arms-control expert and president of the Ploughshares Fund Joseph Cirincione told the National Interest that today’s test was a significant event. “This is a major development,” Cirincione said. “Their third successful ICBM test with the longest potential range yet. It appears to have the potential to go 13,000 miles, depending on the weight of the warhead.”

While some had assumed that external pressure from the United States and its allies had convinced North Korea to hold off on testing, arms-control experts never bought that line of reasoning. Lewis had hypothesized that the lull in North Korean missile tests was probably seasonal, but there could also be other reasons. Indeed, as Reif notes, President Donald J. Trump’s policies have only exacerbated the standoff with North Korea.

Cirincione noted that North Korea missile and nuclear tests are driven by the Kim regime’s internal dynamics rather than by Trump. “I generally believe that North Korea’s test schedule is driven by its own internal dynamics, but they certainly timed this well,” Cirincione said. “They watch the United States very closely, and whether intentional or not, they tested at a time when the President is wrapped up in domestic politics, limiting his ability to respond. They also tested this ICMB with a lofted trajectory, which minimized the ‘threat’ profile, and, of course, did not test this missile with a live, nuclear warhead.”

What today’s missile test does highlight is the fact that Washington must find a diplomatic solution to this crisis as North Korea continues to rapidly advance its nuclear-weapons and missile programs. “North Korea's progress speaks to the urgent need to marry continued economic pressure on North Korea with pursuit of diplomatic off ramps—without preconditions—aimed at reducing tensions and freezing Pyongyang’s long-range missile and nuclear testing,” Reif said. “The Trump administration does not appear to have such a coherent strategy. That needs to change—and fast.”

While the outlook is bleak, there is a potential silver lining. North Korea might be nearing the completion of its test series. That could mean that there might be some potential for a diplomatic solution.

“One possible positive sign in this test: North Korean Foreign Minister Ri said at the U.N. in September that they were ‘finally only a few steps away from the final gate of completion of the state nuclear force.’ That could mean they intend to conduct one or two more missile tests and then declare their nuclear deterrent complete,” Cirincione said. “That could finally open the door to negotiations. A door we should have walked through long ago—before they had a nuclear-armed ICBM that could hit any part of the United States.”

Of course, the situation could deteriorate further if relations with the volatile North Korean regime are not handled carefully. “This was probably their first go-round with an upgraded second stage. Next time, they’ll go over Japan. They may do that a couple of times to be sure it works as intended before they try Juche Bird (a live nuclear missile shot),” Pollack said. “I don’t think they want to do that, in particular. They have adhered to the global norm of underground testing until now. But if and when they find that their successful demonstration of an ICBM into the South Pacific hasn’t moved the U.S. off its policy stance, then they'll feel compelled to up the ante.”

Only time will tell how the situation develops, however, at this point, it is likely that the United States will simply have to live with a nuclear-armed North Korea. That means that deterrence is probably the only viable solution.