North Korea: The Case for Doing Nothing 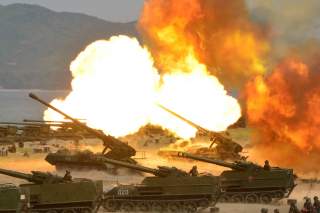 For seventy years now, we have repeatedly been told that the proliferation of nuclear weapons can only lead to disaster.

But in fact, since World War II, none of the handful of countries with nuclear weapons has “used” them for anything other than for stoking the national ego, or deterring real or imagined threats.

North Korea seems highly likely to follow the same approach. The hysteria its nuclear program has inspired is simply not justified.

North Korea sports perhaps the most pathetic, insecure and contemptible regime in the world, and survival is about the only thing it has proved to be good at. It surely knows that launching a nuclear bomb somewhere against a set of enemies that possess tens of thousands is a pretty terrible idea. This would be the case even if the missile actually manages to complete the trip and even if the warhead actually detonates, neither of which is very likely given the country’s technological prowess: 88 percent of the flight tests of some of its missile have failed (5 to 10 percent is normal). And North Korea does continually insist that its nuclear program is entirely for “defensive” purposes.

Moreover, if its goal were to commit self-destructive mayhem, it has long possessed the capacity to do so. With the artillery it has amassed in its south, it could pulverize much of South Korea, including its capital city, Seoul.

North Korea’s ego-stoking has, of course, already started. And the threat it needs to deter has not exactly been difficult for it to identify. Since the 1950s, the United States has persistently and unambiguously wanted to take out the regime, and it has, at times, actively schemed to do so.

Although a quick perusal of the front pages might suggest that Donald Trump has a lock on irresponsible, even infantile, presidential bloviating, the art form has a long history. A prime example, and the one that essentially started the current phase of hysteria over North Korea, occurred shortly after 9/11 when President George W. Bush announced that America’s “responsibility to history” was now to “rid the world of evil”—rather outdoing God who once tried with that flood of His.

Then, a few months later, Bush specified in a major speech that, while evil could presumably be found everywhere, a special “axis of evil” existed, and it lurked, in this order, in North Korea, Iran and Iraq. As Bush geared up to attack number three in early 2003, North Korea announced that it would be withdrawing from the Nuclear Non-Proliferation Treaty.

North Korea’s wariness about negotiating away its nuclear capacity can only have been enhanced by the experience of Libya’s dictator, Muammar el-Qaddafi, who cut a deal with the Americans to do that in 2003. When Qaddafi was confronted with an insurrection in 2011, the Obama administration militarily intervened, speeding his downfall and brutal execution.

It is commonly argued that we have to worry because the North Korean regime is exceptionally crazy. However, there have been instances in the past when the weapons were taken on by countries with leaders who were certifiably deranged—countries far larger and more scary than North Korea.

Thus, when he got his bomb, the Soviet Union’s Stalin had been plotting to “transform nature” by planting lots of trees and was given to wandering around the Kremlin mumbling that he could no longer trust anyone, not even himself. And when China’s Mao got his bomb, he had recently launched an addled campaign to remake his society that created a famine killing tens of millions. Yet neither country used its nuclear weapons for anything other than deterrence and ego-boosting.

That was not the common anticipation at the time. For example, when China began building a bomb—impelled, like North Korea, primarily by incessant threats from the United States—President John Kennedy very seriously considered bombing the Chinese nuclear facilities. He was heard to declare that “A Chinese nuclear test is likely to be historically the most significant and worst event of the 1960s.”

Instead, the United States essentially did nothing. China ended up building far fewer of the bombs than it could have, its foreign and domestic policy eventually mellowed very substantially and the existence of its arsenal has proved to be of little historical consequence.

And it turned out that “historically the most significant and worst event of the 1960s” stemmed not from China’s nukes, but from Kennedy’s tragically misguided decision to begin to send American troops in substantial numbers to Vietnam largely to confront the Chinese threat that he came to believe lurked there.

John Mueller is a senior fellow at the Cato Institute and a political scientist at Ohio State University. Among his books are Atomic Obsession: Nuclear Alarmism from Hiroshima to Al-Qaeda and (with Mark Stewart) Chasing Ghosts: The Policing of Terrorism.