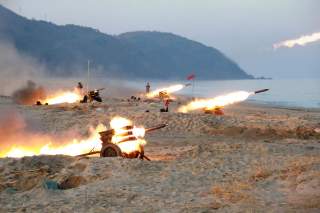 Since the launch of a North Korean medium- to long-range intercontinental missile this month, there has been much anxiety about Pyongyang’s ability to strike U.S. cities. It seems likely that North Korea can at least strike Alaska’s largest city, Anchorage. Some analysts have suggested Pyongyang already has the capability to strike the east coast of the United States. Skepticism may be warranted. North Korea may have trouble with missile reentry, guidance, warhead miniaturization and other technical issues. But nonetheless, it appears quite likely that if Pyongyang does not yet have the ability to strike the lower forty-eight American states, it will soon. Last month, I suggested the United States is on countdown of sorts. North Korea is rushing toward a nuclear ICBM, and Americans will soon be forced to adapt to it, or fight. It seems that decision fork is coming sooner than many expected.

Striking North Korea would be incredibly risky, and the United States has learned to live with other states’ nuclear missilization. Russia, China and Pakistan are powers whom Washington would almost certainly prefer were not nuclear. Yet the United States has adjusted. Each of those three, including Pakistan, has treated its weapons reasonably carefully. There has not been the much-feared accidental launch or hand-off to terrorist groups. All appear to think of their nuclear weapons as defensive and for deterrence purposes. Indeed, the offensive potential of nuclear weapons is curiously constrained. They would so devastate an enemy that conquest of said enemy would be pointless—who wants to take-over an irradiated wasteland? Plus, nuclear use would likely bring nuclear retaliation on the attacker, in which case any benefit of a war would be lost to the huge costs of nuclear destruction in the homeland.

This logic seems to apply to North Korea as well. In the most extreme possible scenario, where Pyongyang used nuclear weapons against Seoul to facilitate a successful invasion, the devastation in the South would be so awful, that one wonders why North Korea would want to invade at all. Due to the peninsula’s mountainous terrain, only a few areas of South Korea are easily habitable for large numbers of people. Nearly 75 percent of the population lives on 30 percent of the landmass. Those small areas—basically the South biggest cities—would be targets of Northern nuclear weapons in any such war. If North Korea were to win that conflict, it would then inherit those irradiated, blasted population zones, in addition to scarcely usable mountains. What would be the point of winning then? Of fighting at all?

Similarly, North Korean nuclear use against the South—or Japan or the United States—would lead to devastating American nuclear retaliation. South Korea and Japan have been treaty allies of the United States for decades. These relationships are about as robust as any in the U.S. alliance network. Countless secretaries of state and defense have pledged to protect Seoul and Tokyo. So American nuclear retaliation would almost certainly follow any Northern offensive nuclear strike. North Korea would inherit an apocalyptic wasteland in the South, while absorbing punishing nuclear retaliation at home—so punishing in fact, that the regime itself might collapse under the weight of the social chaos unleashed by American nuclear strikes.

Some fear North Korea might ‘hand off’ a weapon to rogue groups, but no states have done this yet. Others suggest nuclear weapons might be a method to bully South Korea into subservience or permanent subsidization. But so long as South Korea remains allied to the United States, it is not clear why North Korean nuclear blackmail would succeed. Pyongyang’s nuclear weapons level the playing field in the peninsula rather than shift it against South Korea.

In short, North Korea’s possible use of its nuclear arsenal is highly constrained. It fits the profile of other state’s nuclear weapons—great as an ultimate guarantee of national defense and sovereignty, great for national prestige, but hugely risky for the offense. It is not clear that North Korea can escape the issue of practical use which so many other nuclear powers have tried to solve. There is simply no way to use these weapons for gain that would not immediately provoke massive counter-costs.

Yet we seem to have a hard time transferring this logic to North Korea. Americans are deeply worried about war with North Korea, and our pop culture routinely portrays Pyongyang as aggressive toward the United States. Even if it could win a war, North Korea’s decrepit, neofeudal, gangster state probably could not absorb the South Korean population—which is twice the size of the North and long accustomed to democracy and freedom.

So yes, North Korea’s nuclear weapons are unsettling, even frightening. But nuclear weapons have not been used for offense to date (barring WWII), and there is little to suggest that North Korea can escape the same ‘unusability’ trap other nuclear powers find themselves in. These weapons are almost certainly for defense and deterrence, so we should respond in kind with missile defense. That, not airstrikes and a consequent huge risk of Asian regional war, is the way forward.