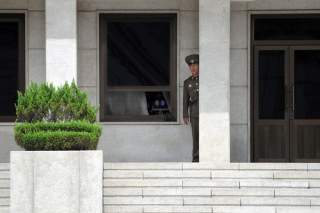 Since the recent conclusion of the war between Hamas and Israel in Gaza, the United States and Israel have begun pointing fingers at the Islamist terrorist group’s usual benefactors: Iran, Syria, Qatar and Turkey. However, there’s an additional, somewhat-oddball patron about five thousand miles away—North Korea. As then secretary of defense Robert Gates asserted in August 2010, “The fact is that North Korea continues to smuggle missiles and weapons to other countries around the world—Burma, Iran, Hezbollah, Hamas—and they continue with their development of their nuclear program.” A recent report in The Telegraph highlighting an arms deal between North Korea and Hamas only grazes the tip of a much deeper relationship. Below the surface, Hamas’ vast tunnel architecture and its tactical use of tunnels to conduct surprise assaults behind Israeli lines suggest an even more nefarious North Korean role.

Pyongyang’s military ties to the anti-American Middle East axis go back three decades when North Korea began providing arms to Syria and Iran, then accounting for the vast majority of its arms exports. At that time, it also began training senior Hezbollah members in North Korea, including Secretary-General Hassan Nasrallah, Mustafa Badreddine, the organization’s current top military commander, and Ibrahim Akil, head of its security and intelligence service. In 1989, just prior to becoming Iran’s Supreme Leader, Ali Khamenei also visited Pyongyang. Even with the U.S. Navy in hot pursuit after the first Gulf War, missile-laden ships from North Korea still made their way to Iranian ports.

Second, the Pyongyang regime has a long history of exporting its world-renowned tunnel-building expertise. In addition to aiding both Burma and Iran, it has also helped Hezbollah develop its extensive tunnel and bunker network in southern Lebanon. As an American federal judge who found North Korea and Iran liable for damages wrought by missile attacks on Israel in 2006 recently concluded:

“[North Korea provided] critical assistance in building an extensive and sophisticated fortified tunnel network in the area south of the Litani River and bordering Israel. This structure proved to be invaluable to Hezbollah in the course of the 2006 war. The configuration and parameters of the tunnel system closely resemble the layout of similar systems in the demilitarized zone separating North and South Korea.”

North Koreans reportedly disguised themselves as “domestic workers” for Iranian diplomats in Lebanon to help Hezbollah build the underground tunnels. According to a CRS report, these trainers also helped integrate the use of tunnels into military operations, specifically how to hide weapons in bunkers and how to use the tunnels in tactical situations. Two key North Korean entities, Korea Mining Development Trading Corporation and Green Pine Associated Corporation, have both been the subject of U.S. and UN sanctions and have been suspected of exporting tunnel expertise.

While there is, as of yet, no smoking-gun evidence that North Korea assisted Hamas directly in constructing its tunnels, the evidence is very suggestive. According to Haaretz, the tunnels are similar to the small and deadly tunnels dug from North Korea to South Korea under the Demilitarized Zone in the 1950s, during the Korean War. During its recently concluded operation, the IDF discovered and destroyed thirty-two tunnels, fourteen of which led directly into Israel. Moreover, Hamas officials need not have traveled to the North (nor North Koreans to Gaza, which would have been easier to detect) when they could simply have received their training either in Iran, Syria or Lebanon. North Korea may indeed be the wholesale supplier, but its wares are being sold through Iran or Syria at retail prices.

Tunnels from Gaza are nothing new. In 2001, Palestinians began using explosive-filled tunnels to attack Israeli border posts. Most brazenly, Hamas used a cross-border tunnel to kill several Israeli soldiers and kidnap Gilad Shalit in a June 2006 surprise raid. Once it took full control of Gaza in 2007, Hamas began a long-term project to build a network of tunnels, often compared to the complex Viet Cong tunnels in the Siamese jungles. These concrete tunnels (roofs and walls) seem relatively simple, but have lots of entries and exits, and are wide enough for one or two terrorists to run through them. Many of them are interconnected, allowing for both defensive purposes during guerilla warfare, but also offensive purposes in conducting assaults on sovereign Israeli territory.

Lastly, and perhaps most worryingly, North Korea has also been keen to export nuclear knowhow to Iran and its allies. In 2012, a senior North Korean delegation visited Tehran and signed a Scientific Cooperation Agreement. The agreement is similar to one it signed with Syria in 2002, an association fraught with nuclear overtones, given Pyongyang’s deep involvement in the Assad regime’s plutonium-based nuclear reactor at Al-Kibar, which was subsequently bombed by Israel in 2007. Continued high-level North Korean nuclear contacts with Iran are well documented, even as Iran ostensibly engages in high-stakes diplomacy with the West. Although North Korea has offered verbal assurances not to proliferate to nonstate actors, the historical record is clear: Imagine all the places where North Korea has sold every bit of military technology it has ever developed; it would not hesitate to share its expertise with either Hezbollah or Hamas.

Hamas’ vast tunnel network almost certainly benefited from outside assistance, whether directly from North Korea or via Iran. Any true solution to the terrorist threat in Gaza must not only involve the full disarmament of terrorist groups, but also sever their links to foreign sponsorship. Washington should relist North Korea as a state sponsor of terrorism, reversing the decision taken by the Bush administration in October 2008. It should make Pyongyang’s military cooperation with Iran, Syria, Hezbollah and Hamas an explicit element of future negotiations, whether in the venue of Six Party talks or bilaterally. And it must step up enforcement of UN sanctions, including surveillance and interdiction of North Korean wares headed to the Middle East, and secondary sanctioning of Lebanese-based trading companies that have North Korean clientele. Washington and Jerusalem are certainly wise to focus on regional countries, but they must also point their fingers further afield at North Korea.

Victor Cha is the D.S. Song-KF Professor in the Department of Government and School of Foreign Service at Georgetown University and is the Director of Asian Studies. He is also a Senior Adviser at the Center for Strategic and International Studies.

Gabriel Scheinmann is the Director of Policy at The Jewish Policy Center and a doctoral candidate in international relations at Georgetown University.