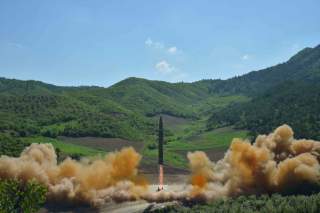 On July 4, doubtless to provoke the Americans on their Independence Day holiday, the North Koreans claimed to deploy an intercontinental ballistic missile. The missile launch was a “lofted” shot, meaning it was fired at an angle greater than 45 degrees. This allows it to travel higher but a shorter distance across the earth’s surface. Although the missile splashed down in the Sea of Japan, we can back-calculate from its altitude to how far it might have traveled if fired at an ideal, 45-degree angle. At the moment, the estimates are three to four thousand miles. That puts most of Alaska within range and is on the cusp of Hawaii.

This is a step forward in range to be sure, but there is dispute over whether to term this an ICBM rather than an intermediate-range or medium-range ballistic missile. Ultimately, though, the nomenclature is less relevant than the distance. The consensus is that this is now the longest-range North Korean missile we have yet seen in operation. Greater Anchorage, the largest urban agglomeration in Alaska, encompasses approximately four hundred thousand people. This new launch appears to decisively move those people into range. This is the first time a new nuclear power has been able to strike a major American city since the Chinese developed ICBMs during the Cold War. For a topic as prone to hyperbole as North Korea, this is bound to be read as a “game changer” by American audiences and drive the growing discussion about U.S. air strikes.

Not Quite a “Game Changer,” Actually: We Knew This Was Coming

I have argued before against the alarmism that characterizes so much of the North Korea debate. It is worth reiterating a few points before this week’s cable-news punditry runs us over the edge toward airstrikes:

• North Korea has been telling us for years that it wants a nuclear weapon and missiles. Today’s launch obviously worsens the situation, but not in ways we did not foresee. We have had time to think about how to respond (even if we seem bereft of good ideas). Hence my resistance to the “game changer” and “Franken-missile” rhetoric that so often accompanies these North Korean mini-crises.

• North Korea almost certainly does not intend to strike the United States with a nuclear weapon. Even if we assume North Korea can strike the United States with such a weapon, it would be suicide to do so. And if there is one thing we have learned from the decades of decadence and gangsterism of North Korea’s ruling Kim family, it is that they like their luxuries. There is much debate about what precisely the Kims’ goals are (are they still really committed to unification?) but one obvious intention is to live up the good life. The Kims’ neronian habits are notorious—liquor, cars, women, yachts, palatial residences. This is the reason for the luxury-good ban on the regime and why it refers to that ban as “extra-large crimes against humanity.” These are no spartan, committed cadres living in caves according to a strict ideology, ready to die for their beliefs. So it is highly unlikely that the Kim elite would throw away their indulgences on a strike they know would bring devastating U.S. retaliation.

• This weapon, rather, is intended to deter U.S.-led regime-change efforts. The United States has flirted for decades with attacking North Korea by air, most notably in 1994. The United States has also attacked many rogue states—Panama, Yugoslavia, Iraq and Libya, to name just a few. It is therefore predictably rational for Pyongyang to seek the ultimate guarantee against such an attack. The program is not some madman’s dream to blow up the world, as Trump and Rodrigo Duterte of the Philippines have both suggested. If the Kims wanted that, they could have started a cataclysmic war years ago. The Kims likely also see the program as a hedge against Chinese domination. North Korea is economically dependent on China, but its nuclear program and general truculence with global norms signal that it will not become Beijing’s political satellite. In short, as long as the United States (and China) stay out of North Korea’s internal affairs, nuclear use is highly unlikely.

• ICBM range is not enough. A missile that can fly far enough to strike Alaska is not enough. It must also be able to carry a warhead (1,000–1,500 pounds), survive re-entry through the atmosphere and land on a pinpoint target. U.S. cities may seem like large places from a terrestrial vantage point within them, but from five to ten thousand miles away, they are a small grid reference on a map. “Throw weight,” the ability to “throw” or launch a large weight (i.e., a warhead) a far distance, can get a North Korean missile in the vicinity of North America. But there are still several further steps required, and there is little way for outsiders to verify that the North Koreans have reliably crossed those thresholds. Just because the North Koreans can say they can nuke a U.S. city does not mean they can. Remember this outlandish map?

What to Do? Sanctions and China—As Always

This week’s debate mirrors those following the deaths of Otto Warmbier and Kim Jong-nam (murdered in Kuala Lumpur with VX poison). Those incidents, too, sparked the sense that North Korea had crossed a red line, which required punishment. In Kim’s case, the use of a weapon of mass destruction in an airport signaled once again that the North Koreans ignore even the most basic international norms, while Warmbier’s death looked an awful lot like the murder of a hapless, innocent American citizen. Yet both of those incidents passed without any overt response, as likely will this one. Cyber operations are likely—indeed, it is widely assumed that the United States has sought to hack North Korea for years to slow its nuclear and missile program—but an aggressive response is unlikely.

Bombing North Korea has always been a hugely risky option. George W. Bush’s administration was replete with hawks who wanted to find a way to punish North Korea kinetically but could not, and the Trump administration is relearning that dilemma. This pushes the likely response back to what it always been, the much-derided “strategic patience”: sealing off North Korea from the world through sanctions to slow its nuclear and missile programs, pushing China to help more in order to cut off illicit flows into North Korea, and maintaining the deterrence and containment postures on the peninsula which have kept the peace for decades.

But at this point, these measures can probably only slow North Korea’s nuclear missilization. This means that at some point—and it looks to be coming sooner rather than later, given North Korea’s remarkable speed in weapons development—the United States will confront a choice: learn to adapt to North Korean nuclear deterrence, as it did Soviet/Russian and Chinese deterrence during the Cold War, or strike. Given how dangerous, if not rational, the U.S. public and media perceive North Korea to be, this will be a harder to choice than learning to live with Cold War deterrence.